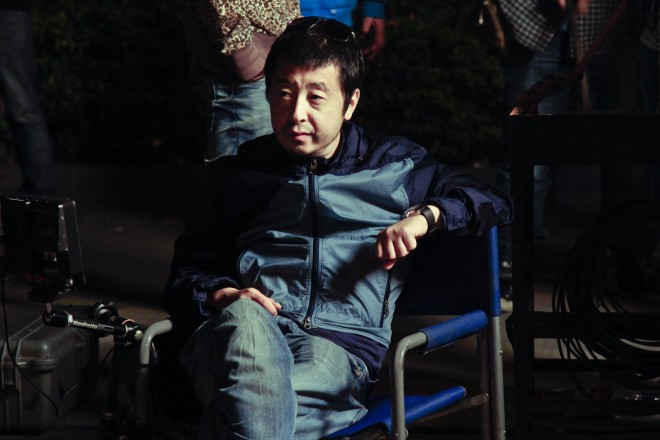 Writer-director Jia Zhangke, 43, is one of China’s most lyrical and provocative filmmakers. His violent, virtuosic epic, A Touch of Sin—which opens this week and is reviewed here— was inspired by media reports of real-life incidents in which ordinary Chinese citizens lashed out against official corruption and greed with acts of vengeance and random violence. The film, which won the best screenplay prize in Cannes, showed last month at TIFF, where I interviewed the filmmaker:

Q: A Touch of Sin presents a deeply critical portrait of corruption, decadence and hypocrisy in China. Is this not a dangerous film to make in China?

A: It’s not a dangerous activity per se. The important thing is to discuss these new events that have been exposed in the media in the past two or three years. There have been countless discussions about them. But what was missing was an artistic discourse. Through cinema, I hoped to discuss the details of these events and bring a new dialogue to them. If, in carrying out this agenda, and thoroughly examining the origin of these violent events, the danger would be the political hurdles along the way.

Q: In scripting and shooting the film, was there a line you couldn’t cross? Were all your decisions artistic ones, or were there political decisions you had to take to avoid censorship?

A: No, I won’t draw that line. Other than artistic creation, the pursuit of my cinema has been to increase the tableau of freedom in independent Chinese cinema. The only effective way to do this is not draw that line.

Q: Will your film be shown uncensored in China?

A:  Yes, the same version is slated for theatrical release in mainland China in October, because it’s already been approved by the censors. I hope they won’t go back and change anything. (laughs)

Q: How does your wife’s role—as a sexually abused spa worker who strikes back at a predator—reflect on the current status of women in China?

Q: Every film that portrays graphic violence is a double-edged sword. Your film addresses the source of the violence but also invites the audience to relish the exhilaration of brutal revenge. Which seems integral to the genre. 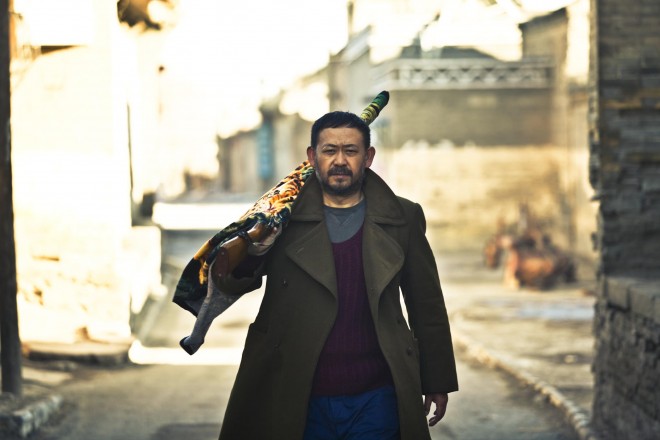 Jiang Wu in 'A Touch of Sin'

A: The film is finally an opportunity for me to explore the wuxia genre. There are parallels between the old wuxia stories and the contemporary ones in this film. In traditional wuxia, social and economic issues arise from political corruption, and the stories are centred around personal redemption. They’ve always had a historical narrative, but I thought I could apply this rubric to contemporary Chinese society. The formal construction of the wuxia film is very kinetic: there’s a sense of movement and speed that comes with working in the genre that lends itself to this thrill. However, most of the wuxia films that come from China are political allegories. And A Touch of Sin belongs in that category.

Q: How will your film be seen in China? Will it be controversial?

A: The first Chinese audiences to see it, at festivals, are living overseas. The question I’m asked most is, after seeing Chinese society in this film, where do I see it going? People see it as a way of opening up the potential of Chinese society. Indeed, the film contains certain answers about the future of Chinese society, because in describing and facing up to the details of Chinese social reality this is the only way we can progress on to the next step. Exposition through the news outlets isn’t enough. Of course, audiences in China are not use to this allegorizing of contemporary social reality, especially the violent nature of it, in the cinema. But this has to change. If we do not face up the image of quotidian violence by showing it onscreen then we’ll never be able to move past it and discuss its origins and where we go from there.

Q: Was your only template wuxia? Or were there influences from Western directors like Scorese and Tarantino?

A: It’s hard to say there were none at all, because I had four years education in the Bejing Film Academy and was exposed to a lot of international cinema. But in terms of direct influences, the only one is The Touch of Zen by King Hu.

Q: In the West, when we think “provocative Chinese artist,” we think of Ai Wei Wei, who now has a major exhibit here at the Art Gallery of Ontario. He wasn’t allowed to leave China for its opening. But you have came to TIFF to premiere your film. Do you have to be careful about what you say as a traveling artist?

A: I saw the Ai Wei Wei exhibition here. You can’t see that kind of exhibition in China. Because Ai Wei Wei’s subject matter and process are directly opposed to the politics of China, he needs to take radical action just to complete his projects, and that’s why we appreciate his work so much. But the very premise of the work brings him into a precarious political realm. If you’re an artist working in China, you become aware that there are things you have to give up in order to practice your art. For the most part, you know what they are. With my first three films, the consequences of making them was that I had to forgo the possibility of releasing them theatrically in China.

Q: Are you friends with Ai Wei Wei?

A: Through other connections, we’ve made contact and acquaintance. I’ve written critically about Ai Wei Wei’s early work. But that hasn’t precluded my love and appreciation for the artist himself.