Johnny English Reborn: Mr. Bean with a licence to talk

A spy spoof for those who find Austin Powers too filthy and Mr. Bean too much like a man in a silent movie 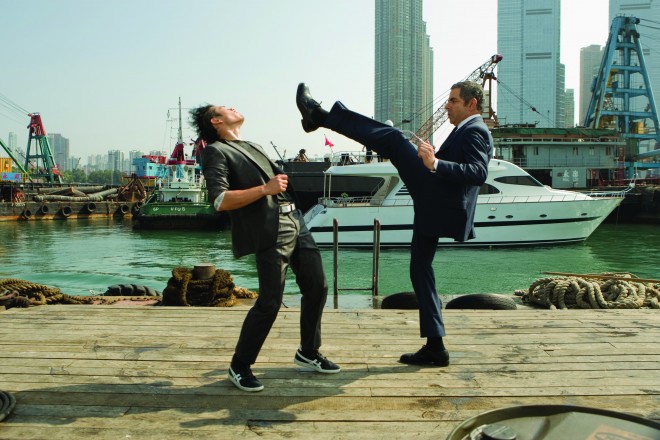 I’m not sure what I was doing in July of 2003 that was so pressing I neglected to see  Johnny English. Must have been sitting on a dock somewhere. Which means that I come to the sequel, Johnny English Reborn, with an unjaundiced eye. Well, not entirely. The only opportunity to see this kid-friendly movie was at a kid-friendly preview on a Saturday morning. Unless you’re actually stuck with trying to entertain a child, no self-respecting adult really feels like going to a movie on a Saturday morning, unless you’re in the thick of a film festival. So I was tad grouchy. But the movie isn’t so bad. It’s amiable, inoffensive and fitfully amusing. Just to be clear, that doesn’t mean it’s so amusing that it sends you into fits of laughter; it was amusing in fits and starts. Now, I realize “FITFULLY AMUSING!” is not a roaring endorsement, even with the exclamation point that studios routinely add when turning quotes into blurbs. But it’s hard to get terribly excited about a movie of such modest ambition. Its gentle laughs are well earned but never quite reach the belly. But compared to this weekend’s juggernaut, The Three Musketeers—which reboots Alexandre Dumas’ classic  with special effects, fireballs, airship galleons, a flying ninja sexpot, and a lot of naked ambition to launch a Pirates of the Parisians franchise—Johnny English Reborn is almost quaintly subdued. With the sequel arriving eight years after the tepid success of the original, it’s as if it can’t be bothered to be a franchise.

Directed by Oliver Parker—an Oscar Wilde fan whose films include An Ideal Husband, The Importance of Being Earnest and Dorian Grey—Johnny English Reborn is a spy spoof for those who find the Austin Powers franchise too filthy. Or you could say it’s a Rowan Atkinson movie for those who find Mr. Bean too much like silent movie character. Atkinson’s Johnny English is basically Bean with a licence to talk, and the comedian animates the character with the same arsenal of rubber-faced farce that has made Bean so effective. The smug, self-possessed Johnny English is less infantile than Bean. He has a dry, misplaced poise. But he’s still a bumbling nincompoop—one whose stupidity hinges on an exaggerated sense of his own intelligence. 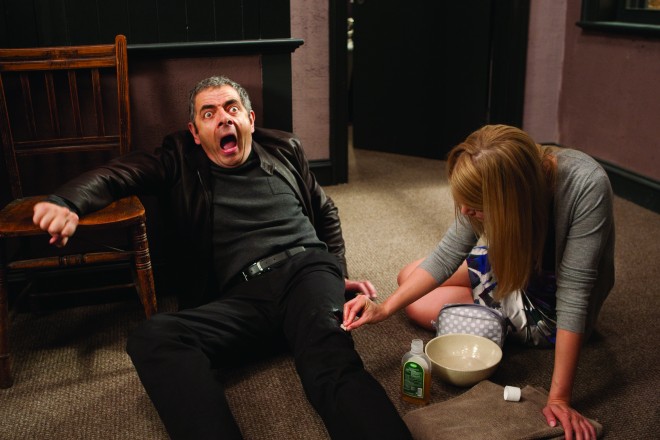 As the story begins, our hero has spent eight years sequestered in a Tibetan monastery, honing his martial arts prowess under the tutelage of a sadistic monk—laying low after an infamous cock-up in Mozambique. (His chief monastic lesson is learning how to withstand a kick in the nuts, a skill that will prove invaluable.) MI7’s spymaster, aka Pegasus (Gillian  Anderson of The X-Files) hauls the defrocked agent back to London assigns him to thwart a plot to kill the Chinese premier, and reunites him his idol, the smarmy agent Ambrose (Dominic West). In 007 style, the mission takes Johnny English globe-trotting to exotic locales, from Hong Kong to the Swiss Alps. He’s stalked by a persistent  assassin who keeps popping up as a cleaning lady (Pik-Sen Lim)—an Asian version of From Russia With Love‘s Rosa Kleb. Along the way a variety over-qualified actors show up in thankless roles, from Richard Schiff (The West Wing) to Rosamund Pike (Barney’s Version).

Pike, who played a real Bond girl in Die Another Day,  is cast as a behavioural psychologist who serves as a vague love interest in a movie that doesn’t try to bore its juvenile audience with romance. (I felt almost as sorry for Pike here as I did in watching her fawn after Owen Wilson in The Big Year. Get this fine actress a better casting agent!)

Atkinson, meanwhile, is teamed up with an Employee-of-the-Month black sidekick (Daniel Kaluuya), a flunkey role that verges uncomfortably close to racism, even if his status as an undervalued genius is designed as a comic foil to Johnny’s stupidity. It’s asking a lot of a young audience to see past the step-and-fetch-it stereotype.

The strength of the comedy lies in the droll timing of Atkinson’s performance, which is punctuated by some virtuoso flashes of slapstick and  facial contortion. There are also some novel action sequences, such as a high-speed chase in a wheelchair. But even beyond the strokes of Bond parody, the script feels derivative. A mind-control trope seems lifted from Zoolander‘s plot to assassinate the Malaysian prime minister, and a pratfall involving the Queen of England owes a debt to The Naked Gun. As this the gentle, eager-to-please comedy builds to its modest climax, there’s a mounting sense that Atkinson’s schtick is wearing thin.