Marvel, Fox and the fantastic fracas

From the archives: Marvel Comics is cancelling the Fantastic Four series—proof that it may just be willing to sabotage its own properties to spite a rival company 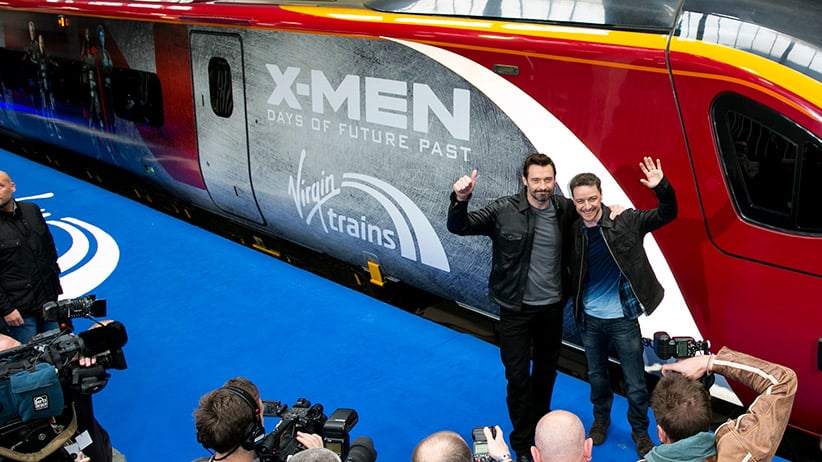 Hugh Jackman and James McAvoy attend at a press conference to promot “X-Men: Days of Future Past” train at Euston Station on March 31, 2014 in London, England. (John Phillips/UK Press/Getty Images)

It sometimes seems like the Marvel Comics characters from the 1960s are the driving force of the entire U.S. movie industry, what with Marvel Studios’ own films, the X-Men movies from 20th-Century Fox, and the Spider-Man franchise from Sony. Marvel probably wishes it could have the movie rights to all its characters, given how lucrative they are, but the company sold off a lot of those rights in the 1990s when business was bad. Would Marvel actively sabotage its own comics in order to deny free publicity to another studio’s movie? That’s what the comics gossip site Bleeding Cool claimed last week when it claimed that Marvel was planning to cancel its long-running Fantastic Four comic, and had already given orders to some artists to omit the Fantastic Four characters from promotional material. The reason? Marvel sold Fox the movie rights to Fantastic Four years ago, and the studio is going into production with a new, hip and edgy version of the four-person superhero team. Any promotion of Fantastic Four by Marvel will benefit Fox’s attempt to bring the team back to public attention, and make it harder for Marvel to get the film rights back (they revert to the owner if Fox goes long enough without using the characters). So, Bleeding Cool argued — and the Internet, being the Internet, instantly believed — Marvel might not think it’s worth its while to feature them too prominently.

Bleeding Cool sometimes gets inaccurate or only half-accurate scoops, but it’s one of the few sites that has any dirt at all on what goes on in the comic book industry (a business that is infamously cozy with a lot of the sites that report on it). While Fantastic Four may not be cancelled, the idea that it was at least in danger of cancellation was partly backed up by the less gossipy Comic Book Resources. That site checked with some sources and found that “a hiatus for the property is planned, at least as of recently. Plans can change, something that’s potentially more likely now that the situation has been made public.” In other words, the controversy might scare the company out of cancelling the book, but that doesn’t mean it wasn’t on the table.

Whether that story turns out to be true or not, the report sparked enough interest that it began to call attention to other things going on with Marvel properties whose film rights are held by Fox. The X-Men comics, unlike the FF’s, are too popular to cancel. But fans of the X-Men books have been complaining that Marvel wasn’t doing very much promotion for the new movie, Days of Future Past, that X-Men characters were rarely at the centre of big company-wide promotions, and that there wasn’t much in the way of official tie-in merchandise for the film — the sort of thing that you normally expect is part of the very reason for doing a big blockbuster movie. (There is official Spider-Man movie merchandise, but that’s because Marvel bought back the merchandising rights several years ago.) After the Fantastic Four rumours broke, Rob Liefeld, a former star Marvel artist and creator of some X-Men-related characters (now remembered mostly as the creator of some of the worst comic art of the ’90s, which is saying a lot), went to Twitter and said that “the Fox shutout is real” when it comes to X-Merchandise:

The lack of support from Marvel didn’t hurt Days of Future Past at the box office; it’s a huge hit that ensures Fox will be mining this franchise for many years to come. All of this could be dismissed as rumour-mongering. Marvel VP of publishing Tom Brevoort has responded this way on his Tumblr (where he answers questions from fans and deals remarkably patiently with fan rage), writing that “the business of a page like Bleeding Cool is to generate revenue through eyeballs on ads, so like any other rumour publication in any other field, they want to print and promote the most provocative stuff that they can.” True enough; for example, Marvel just launched a new book focusing on the FF character Silver Surfer, so they can’t have any kind of company-wide ban on featuring the characters from this franchise. Still, you can’t blame people for thinking that even if the rumours are more provocative than the reality, they still indicate something odd going on between Marvel and Fox.

The signs of antagonism aren’t just coming from one direction. Marvel’s Avengers franchise and Fox’s X-Men franchise share the film rights to two comic characters: Quicksilver and the Scarlet Witch, mutant twins who started as X-Men villains but soon left that book to become Avengers heroes. Last year, Marvel announced that the two characters would appear in the Avengers sequel, Age of Ultron, and almost immediately after, Fox announced that Quicksilver would appear in a scene in Days of Future Past — a scene which, it turned out, was originally written for another character. If there isn’t open war between the companies, there seems to be a sort of cold war, where they’re not shy about their lack of interest in peaceful coexistence.

The enormous success of comic book movies, and particularly Marvel movies, have elevated the importance of comic book companies — not as moneymakers themselves, because the North American comic book reading audience is still small and insular, but as farm teams for movies. (Even though there are few new superhero characters of any significance, new comic stories featuring the old ones are still important: a 2004 Captain America story was the basis for the recent sequel, while Guardians of the Galaxy is based on a recent comics reboot of the franchise.) Up until now, the makers of corporate-owned comic books have mostly been able to balance these dual identities, as small, specialized publishing companies and cogs in a big corporate movie machine. Their fans are always nervous that this could change, that the need to promote and tie in with the films could overwhelm the imperative to keep some of these characters going. What may be most interesting, then, is what this controversy says about comics fans: it seems plausible to them because it’s the nightmare they live with, a future in which comics exist only as movie accessories.

Update: Asked about this by Comic Book Resources, Marvel’s Editor-In-Chief Axel Alonso gave an answer that carefully avoids saying anything definite, which will definitely fuel suspicions further. And he seems to imply that some kind of big change may be planned for the Fantastic Four:

We are continually devising plans to use them in new and surprising ways in the vast landscape of the Marvel Universe, like we do with any Marvel character; in fact, we already know that one of [the FF] will be a huge player in a universe-spanning event down the road.

Part of Marvel’s success hinges on the fact that we aren’t afraid to exercise massive flexibility with our catalog of characters. Sometimes, the way we move the pieces around on the board — the death and/or replacement of a character, the dissolution and/or reconstitution of a team — or our choice of characters to spotlight — Guardians of the Galaxy, Nova, Inhumans — causes controversy, but that doesn’t inhibit us from taking chances and doing what we think is right for our universe and the characters within it. Wolverine and Spider-Man joining the Avengers was a hugely controversial move that ultimately contributed to the revitalization of that franchise and to the Marvel Universe as a whole. The death of Ultimate Peter Parker got a lot of fans screaming, but it resulted in the birth of the now-beloved Miles Morales. No guts, no glory.

We’ll see what happens. One thing we can say for sure though – no one will ever say that any change in the comics was motivated by a desire to get back at 20th Century-Fox.