The interview: Matt Damon on living like a Martian

Matt Damon on working with Ridley Scott and NASA, and what he'd eat if he was lost in space 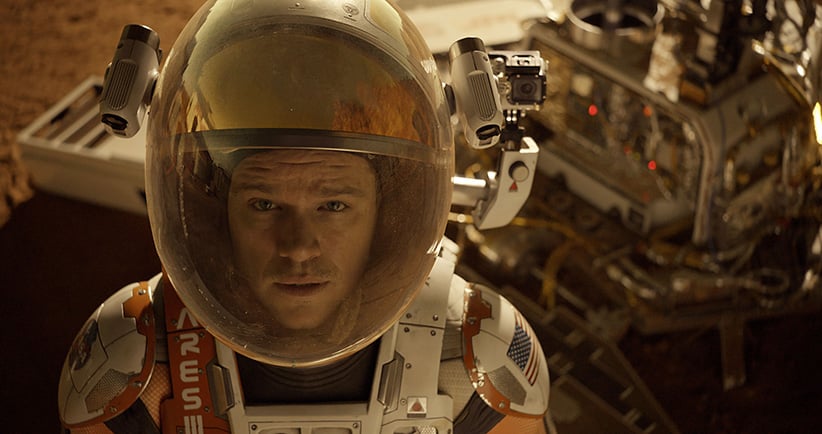 In The Martian, the new film from Ridley Scott, Matt Damon’s character, a NASA astronaut, finds himself stranded on Mars, left for dead by the rest of his crew after a devastating storm. John Semley spoke with the actor.

Q: If you were in this scenario, what is the genre of music you’d want to be marooned with?

A: I could get marooned with U2. I love those guys. You know: great bands, the bands I see in concert. I’ve seen U2 and Bruce Springsteen and Pearl Jam. They’re bands that have played together a long time, like the Stones.

Q: But wouldn’t you grow to hate them if you had to listen to them exclusively?

A: I don’t know. When you’re dealing with the bands that have been around for a while, their catalogues are so vast.

Q: Right. You’d be getting into Goats Head Soup and Voodoo Lounge and all the crummy Stones records.

Related: The Martian: Life on Mars, as envisioned by Ridley Scott

Q: So can you tell me about working with Ridley Scott? You were attached to the project first, right? And then he sort of auditioned for you?

A: Not at all! Drew Goddard, who wrote it, was supposed to direct it. I went and met with Drew and was considering doing it. But then he got Sinister Six, which is a comic book thing he had wanted to do. It was like his dream job. So he said, “Well, okay, I can’t do The Martian. Or I can do The Martian in like a year.” I said, “Okay.” Then I got a phone call that Ridley had been sent the script and like it. I raced over and met with Ridley. It was a five-minute meeting. We sat down and he goes, “The script is great. I mean it’s f–king great. Why the f–k aren’t we making this movie?” And I said, “I don’t know!”

Q: Is that how he talks? He curses a lot?

A: He does a curse a lot. He’s gruff, but in a very playful way. His crew would [lie] down in traffic for him. He always works with the same guys, and they’re so loyal. But you know he’s sitting there at the monitor, with the headphones on, and if 15 seconds go by and nobody says anything, it’s, “Why aren’t we shooting?!” He’s very fun. It’s like a playful drill sergeant.

Q: He’s so well known, especially in sci-fi, for being able to build these worlds. I guess there’s a risk that it’d be hard to build an aesthetic. I mean, it’s a guy on Mars. In a way the director’s challenge is the same as your character’s: building something out of nothing.

A: We had that conversation very early on. We talked about how rigorous you have to be building a world. Science fiction is fiction, but you have to make rules. You have to make rules and stick to them. Your world will entirely fall apart if you don’t do that. If you’re really consistent with your  rules and your boundaries, then you get detailed. But with this one, it was written by a scientist. And basically the whole proposition was: Could the right guy, with the right training, survive in this inhospitable environment for an extended period of time? Then he played out this thought experiment, but based it all on science. The rules were there for us. It was just a matter of making sure the science was correct. We had NASA working with us, just to make sure that we were being as rigorous in the film as Andy [Weir] was in the book. You can’t take any shortcuts.

Related: What do Canadian astronauts think of going to Mars?

Q: Did you ever have moments shooting when you were like, “I have no idea what I’m saying”? Or did you make a point to understand the rudiments of the science, and the botany, and the astrophysics?

A: Well, yeah. The book gets into the weeds a little more. But the book and the movie do a good job of including the audience in that thinking. I mean he needs air, food and water. If they don’t have the spuds there, there’s no movie; he starves to death. There are a couple of ways in which he’s extremely lucky. If there was only freeze-dried food, he would have died.

Q: It looks like you lost a lot of weight, for the scenes later in the film.

A: Well, we were going to shoot it like that, like the way they shot Castaway. I was going to lose a bunch of weight in the third act of the movie, then put the weight back on. But with the way the schedule worked out, we went to Budapest, and then we went to Jordan to shoot exteriors. And we had to shoot exteriors for the beginning, middle and end of the movie. So we used a body double. It was, like, two shots.

Q: I remember reading that when you did Courage Under Fire you dropped a bunch of weight and it really messed up your metabolism.

Q: Like Christian Bale eating an apple and a can of tuna every day?

A: Christian and I did it pretty much the same way.

A: The movies are so different. When Chris [Nolan] came to me with that cameo for Interstellar, I thought it was really dealing with those deep, almost existential questions. It was a beautifully written part.

Q: You so rarely get to play bad guys.

Q: It’s also sort of a Damon supercut. You’ve got the hard math of Good Will Hunting, the ambling existential loneliness of Gerry…

A: [Laughs] I didn’t think about it that way! But now that you mention it, it’s pretty funny. Even Saving Private Ryan. Everyone is risking their lives to save me. That’s another theme.

Q: This movie feels like such a part of this culture of science positivity: Neil DeGrasse Tyson, everyone being interested in space and science. On the one hand, maybe this is what humans do: we explore, we engineer things. But there are times where it seems like space travel is an exorbitant expense, especially when it’s being bankrolled by the public. In some ways it just seems so wasteful.

A: I think if you make the argument that it’s just for the sake of exploration—and there is a good argument for that—it gets tricky. But I definitely feel the species has to figure out a way to get some of us off this planet. We’re one extinction-level event from the obliteration of the entire human species, from all of time. We’re rapidly approaching a point where fewer and fewer people can cause greater and greater damage. We are getting to a point where some very sick person won’t just walk into a movie theatre with a gun, or into a post office with a gun, but will release some kind of . . .

A: Yeah! And just destroy humanity, you know? I know that sounds like something out of a superhero movie, but that is where I think we’re going.

Q: You’re obviously alone a lot in the movie. Where there any challenges there, as far as it just you, being alone, playing off yourself?

A: I was worried about that. I thought it would be a risk. But obviously Ridley being involved served to mitigate that risk a little bit.

Q: I haven’t read the book, but is the character’s sense of humour there? Or is this something you brought to the role?

A: Totally. That’s all from the book. Drew did a really good job of mining the book for those jokes, and adding a few of his own. That was a big conversation Ridley and I had early on: how do we retain the humour while maintaining the stakes? You have to believe that this guy is in peril. You can’t release that tension. You’ve got to keep that taut. And then the humour will reveal itself.

Q: If you, Matt Damon, were stranded on Mars, what food would you choose to subsist on?

Q: Not taking into account nutritional value or anything. Just out of pure . . .