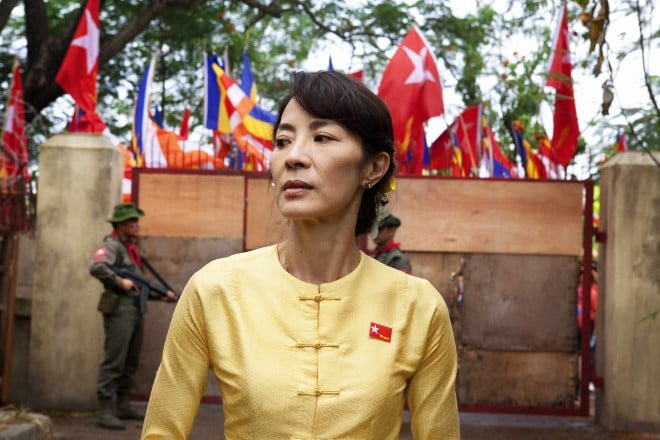 Michelle Yeoh stars as Burmese freedom fighter Aung San Suu Kyi in The Lady, a new bio-pic by French director Luc Besson (The Fifth Element). The daughter of Aung San, the assassinated founder of Burma’s independence movement, Suu Kyi leads the oppositional National League for Democracy. After going home to Burma in 1988 to nurse her dying mother, she became swept up in the democracy movement. She spent 15 of the past 25 years under house arrest, and was most recently released Nov. 13, 2010.  David Thewlis co-stars with Yeoh as Michael Aris, Suu Kyi’s British husband, who died of prostate cancer in 1999, in the thick of negotiating with Burmese authorities to visit his wife for the last time in Burma.

Last September, before The Lady‘s premiere at the Toronto International Film Festival, I interviewed Yeoh and Thewlis:

Q: Michelle, how did you get cast?

Yeo: There was no hesitation: this was the role I’d been waiting for. In Asia we don’t have many iconic heroines. It makes you wonder, why didn’t we think of it before? But we’ve been very lucky with the timing. Luc [Besson] has always been a great friend and a mentor. He’s very savvy about what to do with scripts like this. People steer away from making movies about people who are still alive. You have to have all the rights. The last thing you want is someone putting an injunction on it, and then you’re stuck. As Luc got to know the story better, he fell in love with the script along with Virginie, his producer and his wife. Then I was completely taken unawares when he said he was thought he would direct the film. For us, it’s become more than just a film. It’s really become a commitment driven by passion, driven by how we feel about the subject matter, which is freedom that we enjoy without even having to think about it. It’s swept us into this whole new place.

Q: Did Aung San Suu Kyi have any kind of involvement?

Luc tried to get a message to her through the French embassy so that she would know about the film and who we were. So she knew, but she knew also that it wasn’t her position to say we should or shouldn’t it. What she said was use your freedom to promote ours, to create awareness for ours. It would have been very dangerous for her to speak to us, because she was under house arrest. It would be unfair to put her in that position. After she was released, we’d had been filming literally next door, in secrecy in Bangkok. The people that filmed with us were very respectful. In this day of the Internet and mobile phones, no one ever posted a photograph, even when we had a scene of two or three thousand in the crowd. Thailand didn’t want the Burmese to turn around and say, you’re supposed to be supportive of us. You should put a stop to that.

Thewlis: There’s also multi-million-dollar trade between  Burma and Thailand. There were hundreds of Burmese exiles who who were extras and they had a certain network. But they would to lie about the name of the film they were doing.

Q: Did you meet your character?

Yeo: In the last week of filming, I went and I saw yer. You get so apprehensive. I remember on the way in the car thinking, “Okay, don’t gush, just be cool.” But she’s one of the most charming women. She’s got a great wit, a sense of humour, and she makes you feel very comfortable. At no point do you think  “Oh, I’m  meeting an iconic figure and have to watch my i’s and p’s and r’s.”

Q: What surprised you about her that wasn’t in your portrayal?

Yeo: Her energy. I thought she would be much more serene, much more Zen. Once you start talking to her, this energy that she keeps down, suddenly [she makes a lightning gesture] there’s this energy. She was 65 when I met her, and she hadn’t been well for a while. The way she moved, she was always straight, but once she moved, she would whisk in and out. The one thing we always wondered what was she really like with Michael. Because we never saw any footage. In the old days they didn’t have video where you’d see the family together.. We pieced it together from letters and talking to people who knew them. But they hadn’t seen them in 20 years, so your memory plays tricks.

Q: There’s that remarkable scene where she glides right through the military blocking her at gunpoint, like a ghost. It’s like magic. Did you think of Crouching Tiger, Hidden Dragon?

Yeo: [laughing] There’s a magical quality in that. A couple of times there was an assassination attempt on her life. And a number of her members got arrested and killed and tortured. She has the sense of an aura around her.

Q: Were you ever afraid for your own life?

Yeoh: I should have been more cautious. The first time I went I was very gung-ho. I wasn’t afraid. I thought this was a time for dialogue and change. At the airport she said, “You realize they’re taking your photograph.” I said, “I’m going to give them my best side.” But when I went back a second time, my friends and people who had been there and done business there—and understood how at a whim these people might do something—were more afraid for me. When I was deported, they breathed a sigh of relief that I got out of there and not stuck in limbo somewhere.

Q: Drama depends on conflict between characters. But in this story, the only real conflict is between the regime and the people, represented by Suu Kyi. What challenge does that present to you?

Yeoh: It was very comfortable. It was rather natural I’m afraid to say. I’ve been a great admirer of David’s work since Naked. I thought, I know this guy. Look at him, he’s just adorable. The thing about this couple is you knew they were soulmates. They had a connection. We had just one scene to portray what a tight family it was. Then she goes away to Burma never to return. We had to convey this was a normal family.

Q: But even the best of marriages have conflict. Wasn’t there any evidence of friction between them?

Yeoh: Not that we knew about.

Thewlis: They were very honest with each other. Before they got married, she told him, if my country calls I will have to go. They loved one another.

Q: When you are playing characters who seem absolutely sympathetic and saintlike, is that not difficult?

Thewlis: Michelle had an antagonist in the regime. And Michael’s antagonism is the separation. His demon was the awful agony of knowing he’d lost her. He knew she was never going to come home. When his visa was refused, and then he started to get sick, he realized he would never to see her again. That’s the antagonism, the turmoil. I don’t like play characters without conflict, but that gave me something to play with.

Q: Michelle, you give a speech in Burmese, but you speak English in most scenes with other Burmese, where you would be naturally speaking in their language. Why’s that?

Yeoh: To some extent we did that naturally. We had 200 extras who were nearly all Burmese refugees, and we wanted you to get a feeling that they could speak English. And English was one of the most widely spoken languages in Burma. She had spent 16 years abroad and one thing she always worried about was her accent, and that she would come across as a foreigner. I took great pains to learn the language. I speak Mandarin and Cantonese and Malay. I thought I’d be able to learn the language, and find similarities like you do with Italian and French and Spanish. I did it in [phonetically], but when you see the text, it’s a whole jumble. I had an amazing tutor, who was Burmese, and she was doing a PhD in the Burmese language. The language is such that I said, “When do you pause? When do you take a breath?” I learned that basically the more you can run it together the more it sounds like Burmese.