Monstrous mash-ups: 'Mirror Mirror' and 'Wrath of the Titans' 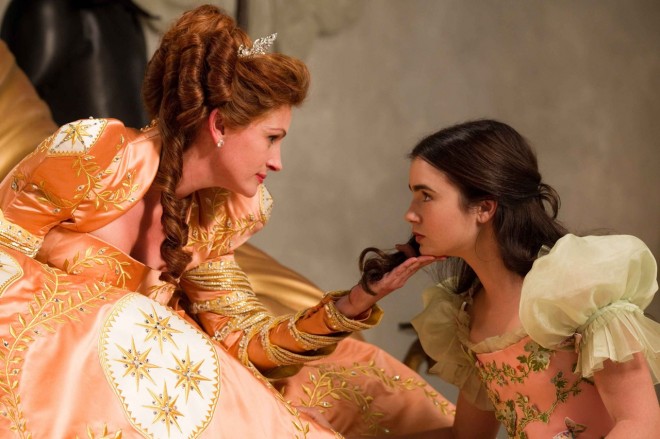 Don’t mess with the classics. That’s one message you could take from Mirror Mirror and Wrath of the Titans, two new Hollywood concoctions that mangle the Brothers Grimm and Greek mythology respectively. Mirror Mirror‘s fractured fairy tale puts a cutesy-poo, post-modern spin on the tale of Snow White and the Seven Dwarves, sapping the venom from its villain and turning its heroine into a pro-feminist princess warrior. Wrath of the Titans plunders Greek myths of gods and monsters to present an overwrought spectacle of volcanic special effects that can be best described as fireball porn. Although it’s difficult to judge which of the two films is more tedious, Wrath of the Titans takes the prize: it’s in 3D, and nothing makes a bad movie worse quite like 3D. And to be fair, although both movies try to make virtues of excess and bad taste, Mirror Mirror‘s assault on the senses is at least esthetically pleasing.

Not unlike the wicked queen played by Julia Roberts, Mirror Mirror is consumed by its narcissism. I can’t remember the last time I’ve seen a movie so obsessed with looking good above and beyond all else. Between the production design and the opulent costumes—which aren’t worn so much as inhabited, like sets—the film is a big, awkward doll house of cartoon fantasy come to life. Filmed on a soundstages in Montreal, it makes Cirque du Soleil look spartan. The actors seem subjugated to the decor, and to a schematic script which denies their humanity at every turn. Julia Roberts plays the wicked queen as if she’s a Hollywood diva trapped in a Vanity Fair photo shoot. She works hard to act evil, but that’s like working hard to be sexy: unconvincing. It’s as if she’s scared of being scary. Or ugly—heaven forbid. Maybe she’s pulled off more of a meta incarnation of vanity than I’m giving her credit for.

Snow White is played by Lily Collins, daughter of Phil Collins, who has the requisite beauty and poise, but never escapes the generic confines of a character designed to set a feminist example for young princesses everywhere. As the Prince, Arme Hammer (The Social Network, J. Edgar) struggles to salvage some dignity from a sucky role that requires him to be Snow White’s ineffectual suitor. Even lower on the ladder of masculinity is a character that the movie has added to the fable for comic relief—Brighton, a bumbling minion to the Queen played by Nathan Lane acting like . . . Nathan Lane.

And the dwarves? They are reconfigured as a Robin Hood gang of highway robbers who train Snow White in various martial arts. (These days a simple kiss just won’t do.) Apparently the dwarfs’ characters were modelled on the actors who play them, which is perhaps why they’re more engaging than anyone else in the movie. (Between this and Ricky Gervais’ TV series Life is Short, it seems to be a good year for dwarves.)

Mirror Mirror‘s chief problem is that it’s so busy cleverly deconstructing the fairy tale that any magic gets lost. It may work for children, or at least young girls; I have no idea. But I imagine most adults will be bored. But don’t despair. There’s another Snow White movie in the offing this year—Snow White and the Huntsman, starring Kristen Stewart.

As for Wrath of the Titans, I can barely bring myself to review it. The movie took more energy out of me than I’m willing to spend on it. It’s yet another action spectacle about one man battling to save the world from a bad god destroying the world. As Perseus, the human son of Zeus, journeyman action hero Sam Worthington (Avatar), keeps his head down amid a ludicrous barrage of exploding stuff and nonsense. The gods are dying, notably Zeus (Liam Neeson), who is chained up in the bowels of hell. In an odyssey of serious spelunking Perseus has to go down there to rescue him, thereby heading off global annihilation.

In among the raining fireballs, two-headed dragons, and thundering slabs of stone, some of the world’s greatest actors exchange snippets of dialogue. Neeson can make these movies in his sleep, and actually look like he’s relishing a good day’s work. On the other hand, Ralph Fiennes, as the god Hades, looks like he’s been sentenced to an eternity of boredom in Hades.