Mr. Turner's paintings are masterpieces. But what about the film?

J.M.W. Turner gets his due, and actor Timothy Spall is showcased in Mike Leigh's cinematically gorgeous 'Mr. Turner' 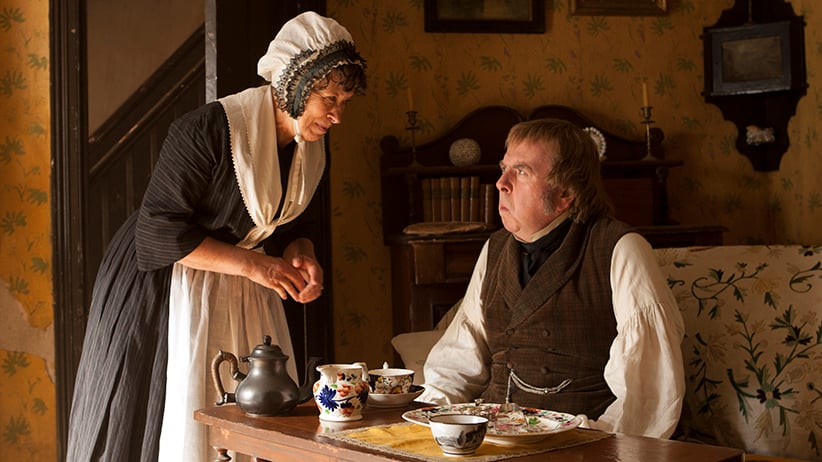 “The sun is God,” were the last words uttered by Joseph Mallord William Turner on Dec. 19, 1851. Now proclaimed as Britain’s greatest artist, his talent is the soul of Mike Leigh‘s new film, Mr. Turner. Coming after his other historical dramas—the effervescent Topsy-Turvy, about Gilbert and Sullivan, and the dreary, bleak Vera Drake, which focuses on an abortionist in the 1950s—this is perhaps his most spare, yet illuminating film to date. He’s certainly picked a perfect subject: Turner was a bona fide genius who never stopped experimenting or challenging convention, yet, as Leigh shows, his personal life was a mess, including unhappy illegitimate children and a rather odd housekeeper who provided à la carte services for her boss.

Though Leigh’s film follows a basic chronological approach, starting when the artist is at the height of his fame, it is arranged as a series of vignettes rather than a completely fleshed out, plot-driven movie. And for someone as complex as J.M.W. Turner, that is perhaps the best way to capture the dichotomy of the man. Coddled by his father, who runs his household, sells his paintings and even mixes the valuable pigments and colours used to create those spectacular works of art, Turner is a crude, driven man comfortable in his selfishness. His world revolves around his ability to translate three-dimensional vistas into two-dimensional paintings. He thinks nothing of dropping everything, and everyone, for a painting excursion.

It’s actor Timothy Spall who brings what could have been a two-dimensional caricature to life. Spall immersed himself in the Dickensian world of Victorian London, even spending two years learning to paint. His every twitch, lumpen step and grunt—dialogue is at an absolute minimum—conveys more than the wordiest of scripts. After winning at Cannes, Spall is all but guaranteed to get an Oscar nomination.

The other force behind Mr. Turner who should earn an Oscar nod is Dick Pope, the movie’s cinematographer, who turned film into a work that would rival any Turner painting. From the very first scene in the Dutch countryside, to the last of the dying artist, the lush visuals—especially its raw landscapes and delicately gorgeous sunrises and sunsets—celebrate the artist.

Turner lived in a time of deprivation and enormous wealth, an era when constant work and graft was the only way the son of a barber could rise to be one of the art world’s greats. Yet, for all his achievements and financial security, the unpolished, slovenly genius constantly chafed against convention. The scenes of Turner sizing up his competition, including John Constable, at the Royal Academy, are deliciously subversive.

Ironically, as his works become less recognizable and more and more evocative—Rain, Steam and Speed: The Great Western Railway breathes the disruptive fury and power of the new-fangled trains—his personal life became more pedestrian, even happy. He settled down with a widow, Sophia Booth, who fussed over Turner with the same un-awed affection of his father. Even after his death, Turner was anything but normal: He gave most of his fortune away, and donated his collection of his own, best works to the nation. Even today, his namesakes—the Turner Prize, for example—conjures up images of innovation and experimentation.

As the Guardian stated, “If the sun is God, as Turner is supposed to have said, this incandescent painter was the sun’s high priest and art is indebted to him.”