I rode my bike a lot, ate a ton of free food, and became best friends with Angelina Jolie 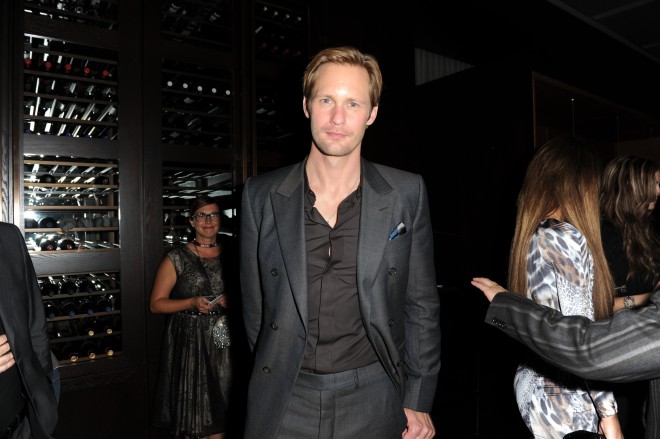 Here's Alexander Skarsgard and me, hanging out like old friends.

TIFF caused major downtown traffic mayhem. It was so nuts that my well-tempered colleague Brian D. Johnson even blogged about how annoying it was trying to travel from event to event. Not for this gal, though. I rode my bike to every downtown press conference, interview, film screening and red carpet and then hauled myself back uptown to the Maclean’s office, sometimes clocking in more than 25 km a day. I even biked to all the parties all dolled up in a dress and heels. And didn’t I feel oh-so-smug while I passed gridlocked cars! That is, until I fell off my bike standing still at an intersection. That’s right, I was stationary before I fell.

Free food usually tastes loveless, which makes it easier to pass up. Maybe it was all the biking I did (see above) or the fact that I’m lying about it being easy to pass up free food, but TIFF made me hungry. Stellar treats included the oyster bar at the Hello! party. An actual oyster bar! Can you imagine? I couldn’t! That’s why I filled up my little plate two or three times with samples of those tasty little bi-valves.

At the amFAR charity gala, little crostini topped with mascarpone, champagne grapes and ice wine jelly were not to be missed during cocktail hour. Neither were the spicy chickpea fritters and the goat cheese poutine at the after party for Sarah Polley’s Take This Waltz on the rooftop of the Bell Lightbox. This took some of the edge off of not being at the Grey Goose Soho House, where I missed out on tasting a little Hamm, not to mention some Gosling with a side of Clooney.

Taking the culinary cake was Scarpetta, who provided platters of lovingly prepared antipasti at the Vanity Fair-Belvedere-Fox Searchlight party: I’m talking balls of burrata with heirloom tomatoes, generous wedges of parmigiano reggiano cheese and the best little taralli crackers this pseudo-Italian has tasted in a long time.

After interviewing Whit Stillman (whose Damsels in Distress, his first film in 13 years, played at TIFF) and the film’s star, Greta Gerwig, I took a moment to collect myself (and have a cigarette–but I’m so done with that nonsense post-TIFF) outside the Intercontinental Hotel. Gerwig, looking every bit a star dressed in a creamy Prada dress with an open back and a butter yellow leather Miu Miu purse, walked by a sea of photographers undetected. She passed me and then double-backed and asked if she could sit and have a cigarette with me. Er, yeah!

Turns out the indie darling, whose big break was in Noah Baumbach’s Greenburg, was on her way to explore the city. She’d already discovered a great Indian restaurant and was enroute to the AGO later that day. “I’m not interested in going to the parties so much,” she confessed.  “If I’m going to be in a new city, I don’t want to just see a hotel room–I want to explore!” I mumbled something about visiting New York this week for a short little vacation and before I knew it, Gerwig had my notepad and pen in hand and was making a list of her favourite food places. (It’s already laminated.)

Hundreds of accredited media types descend onto the city to cover TIFF, and I met so many interesting and funny folks from the likes of CNN, BBC, Fox, IndieWIRE and Time. (Particularly charming was a Chicago-based freelancer, who went on about how the movie The Raid blew his mind: “It was like someone gave my adreneline gland ‘a handy’ for 90 minutes. It’s the best action movie since Die Hard.”)

But some of the local media (by no means, all), weren’t quite as welcoming to this wide-eyed newcomer as I’d imagined they’d be. Maybe there’s an unspoken competitive code that I don’t know about. And maybe they were just working really, really hard. But oh lordie, there are only so many times you can be introduced to the same people, night after night, without feeling a little dismayed when they physically bump into you at the bar, you smile and apologize to them for almost knocking you down and then say, “Oh hello again!” and they look up from their BlackBerry just long enough to frown at you and then walk away.

Even Alexander Skarsgard was more cordial when I accidentally humped his leg (I went in for the hug but he’s so tall!) Restoring my faith in good media manners and decorum was none other than Vancouver-based gossip queen Lainey Lui, who routinely applauded the efforts of TIFF reporters via Twitter, including a tweet that said Maclean’s provided some of the most hilarious coverage of the festival.

I realize the unlikelihood of really getting to know somebody in 10 seconds. But it happened to me. With Angelina (Jolie).

She was being hurried down the Moneyball red carpet while her husband Brad spoke to the press. There was a bit of a traffic jam getting her through and the woman beside me from Associated Press asked Jolie who she was wearing. “Vivienne Westwood,” she called back. Then, time stood still for a moment and it was like the two of us were the only ones there and I whispered to her, “You look really pretty!” What happened next is difficult for me to write about, but let me try.

She looked me in the eyes. No, she stared at my soul, touched her slender hand to her chest, and as her face lit up with enough wattage to power all the Playstations belonging to all the young men who’ve ever played Tomb Raider, she said, “Thank you!” I’m telling you, she was genuinely pleased that I thought she looked pretty. How do I know? Because when you’re best friends with somebody, you can read their body language. And Ang’s body said, “Oh, look at you, you chubby little thing with the eyeglasses and the special looking hands!”

Then, I caught her eyes again and eagerly waved good-bye, like an unsophisticated child might do to an adult. And she waved right back in the same way! But she wasn’t mocking my funny-looking wave or my stupid little hands: she was saying, “I wish we could be friends, because you get that I’m just a girl, like you, but 35 lbs lighter, eight feet taller, three years younger and whatnot.”  Like a seasoned pro I turned back to my videographer Tom and yelled, “TELL ME YOU GOT THAT!”  He didn’t. You’re just going to have trust me.