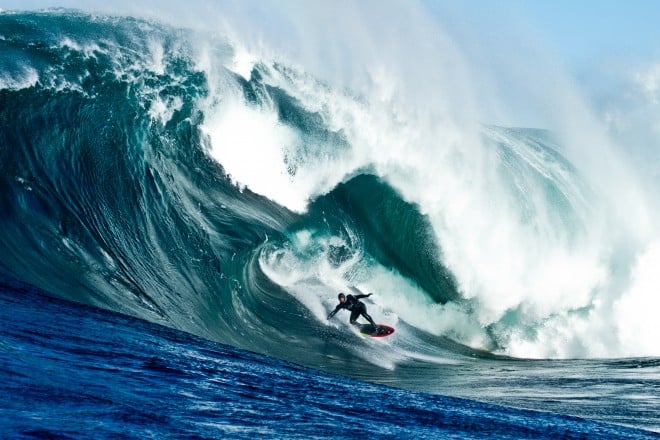 Now that summer’s officially here, it’s silly season at the movies. The time is right for dumb comedy, mindless action and … surf porn. We’re talking about movies that make Man of Steel and World War Z seem intellectually challenging. The Heat and White House Down don’t even go through the motions of being credible. But hey, neither are sequels. No aliens were hurt. And just when you were convinced Hollywood couldn’t offer anything new, both do modify the conventional weaponry of studio formula with novel twists. The Heat may be the first profane, R-rated female buddy comedy, a descendant of Bridesmaids that shatters the glass ceiling of a male genre with a crowbar. It makes you wonder: what took them so long? Ever since the milestone of Thelma & Louise (1991), the female buddy movie has lain dormant as an unfulfilled promise. 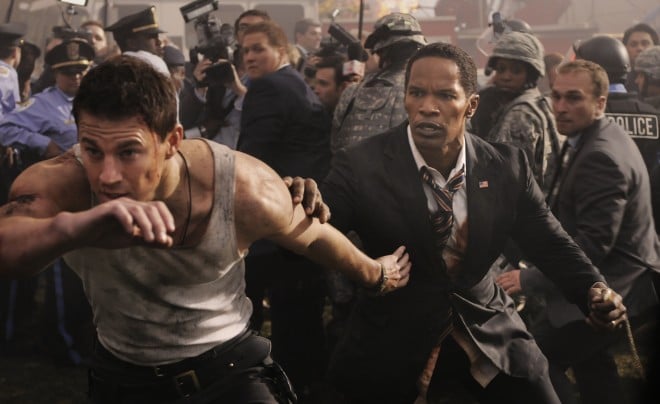 White House Down, meanwhile, may seem like a total throwback. It’s  almost exactly the same movie as the recent Olympus Has Fallen—another Die Hard invasion spectacle that makes a mess of the Oval Office while a rogue security agent on the inside attempts to redeem himself by trying to save the President, an innocent kid, and the free world. Yet there are some telling variations. The terrorists are not North Koreans but an unholy coalition of right-wing neo-Nazis, corrupt officials and something quaintly called the military industrial complex.  Also, the White House is a fantasy-camp version of the current one. Jamie Foxx plays a leftish American president who’s an Obama with more balls and tougher lingo. He’s a Lincoln-worshipping liberal who infuriates his military by pulling all U.S. troops out of the Middle East, but who can talk dirty and kick ass like nobody’s business when he’s handed a machine gun in his own home.

I expected to hate both The Heat and White House Down. But The Heat is better than you might expect: it made me laugh, and it’s hard to argue with laughter. As for White House Down, though it’s dumb, ludicrous and vile, I found myself enjoying its old-school barrage of military fireworks more than I dare to admit. Even critics succumb to the odd guilty pleasure, and for me this movie, which doesn’t bear thinking about, crosses over into the so-bad-it’s-good department. 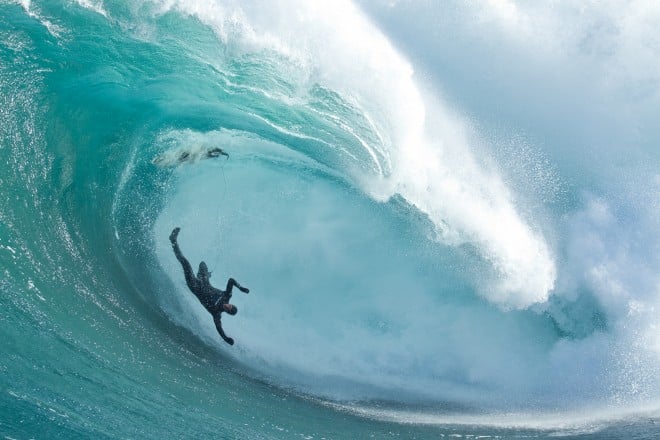 For pure summer action, however, you can’t beat state-of-the-art surf porn.  Storm Surfers 3D is not a great movie, but its pleasure is guilt free. Directors Justin McMillan and Christopher Nelius takes the camera deeper inside an ocean wave than it has ever gone before. Unlike World War Z, with its entirely gratuitous use of 3D, this earnest documentary shows just how effective that extra dimension can be in the right hands. When used properly, 3D is an immersive medium, not an invasive one, and what on earth could be more immersive than water? Hey, the ocean is built for 3D, as Ang Lee showed with Life of Pi. And I challenge anyone to find a more essentially stereoscopic shot than a surfer corkscrewing through the tube of a massive wave. The other innovation that revolutionizes surf photography in this film is the ultra-small and portable GoPro 3D camera, which is worn and held by surfers from every conceivable angle. Along with five other camera formats it allows directors Justin McMillan and Christopher Nelius to take surf cinematography to a whole new level.

I use the term with affection; I love surf porn. But as a documentary, Storm Surfers lacks the strong narrative and characters that distinguished Riding Giants, Stacy Peralta’s definitive 2004 doc about the history of big-wave surfing. A movie consumed by its own POV, Storm Surfers is about a trio of wave “explorers” on a quest that is, in essence, the making of the film at hand. The team consists of two Aussie surf legends, former world champion Tom Carroll and big-wave pioneer Ross Clarke-Jones, along with surf forecaster Ben Matson. The characters are intriguing, up to a point. There’s some suspense as Carroll, a family man now pushing 50, tries to regain his mojo and lose his fear, while gonzo daredevil Clarke-Jones throws himself down walls of water as big as buildings. But surfers talking about the thrill and the challenge and the ineffable mystery of it all gets tired. Also, as the boys use jet-skis to get towed out to ever bigger waves, the ocean doesn’t always co-operate with the escalating narrative—the climactic expedition, to a never-surfed break 75 km offshore doesn’t quite live up to the billing. But even if Storm Surfers 3D smacks of a vanity project, the footage is astounding and well worth the ride. 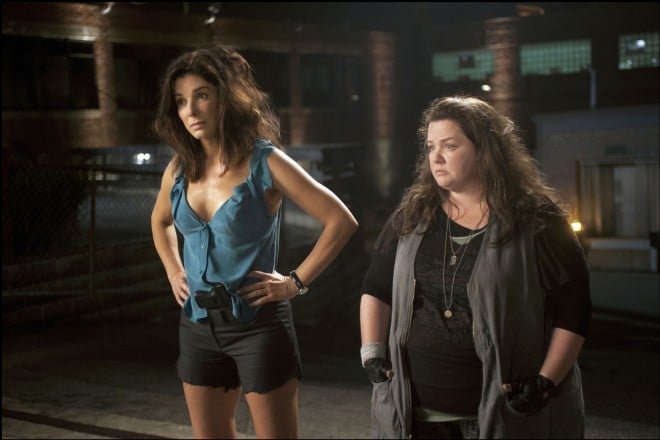 The Heat throws a distaff spin on a well-worn trope—the good-cop/bad cop chemistry that comes from an unwilling partnership between a snotty, by-the-book officer and a raunchy blue-collar thug. Sarah Ashburn (Sandra Bullock) is an uptown special agent for the FBI who has an unrivalled record but gets no respect from her colleagues because she’s a prissy over-achiever. Shannon Mullins (Melissa McCarthy) is a low-life Boston cop who drives an old rust-bucket, swears like a sailor, and pursues pimps and drug dealers with a ball-busting relish for police brutality. She’s so embedded in the local crime scene that she lives next door to scumbags she’s chasing. As these two characters are forced to become partners in a hunt for a drug lord, they hate each other from the get-go. At first it’s just a slapstick comedy of errors. But after Mullins literally dresses down Ashburn, tearing her clothes to shreds in a nightclub washroom, a brash sisterhood begins to take shape.

The movie comes from Paul Feig, director of Bridesmaids, the movie that ushered in the female gross-out comedy and made $300 million. It also kick-started McCarthy’s career with an Oscar nomination. Here McCarthy is perilously close to digging herself into a typecast rut as a hell-on-wheels bully avenging every fat joke ever made, while making a few herself. (One of the funniest scenes involves her parking in a spot so tight she has to squeeze herself through two car windows to get out.) But McCarthy is hilarious; she delivers her profane gags and insults with explosive timing, raising the stakes each time out to untold extremes of gonzo behaviour. This is an actor in pocket, and the movie belongs to her. But Bullock is a great sport, underplaying her role as the sheepish straight woman with a deadpan charm.

The screenplay is not as rich as the one Kristen Wiig wrote for Bridesmaids, and the story follows a predictable arc. But it’s the product of one woman, not a screenwriting cabal—Katie Dippold makes her feature writing debut with The Heat after scripting Parks and Recreation for three seasons. There are some sharp, observational touches behind the antic comedy. And during the lulls in the action there are some sensitive time-outs between the co-stars that almost feel they belong in another movie. 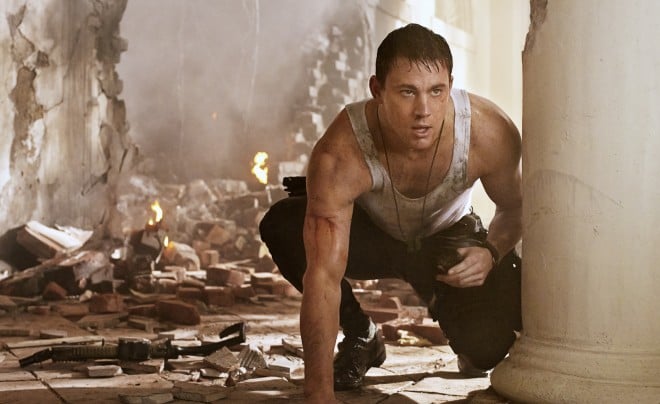 Channing Tatum in 'White House Down' / courtesy of Columbia Pictures

There’s not a glimmer of intelligence in White House Down, which is not to say it’s all mindless action. Like a visual equivalent of the nacho extravaganzas they serve at the multiplex these days, this movie is dripping with cheesy sentiment and fake substance. And there are some semi-automatic bursts of comedy, notably a running gag involving a White House tour guide who’s terrified that the invading terrorists will damage some priceless antiques. Then there’s the egghead hacker in a black leather jacket, who seems inspired by Mike Myers’ SNL ‘Sprocket’ character, and who hijacks the White House computer system while playing Beethoven’s Fifth. But as farce and serious drama attempt to co-exist in an implausible plot, the most improbable construct is the president himself, the kick-ass pacifist. When POTUS first picks up a gun, we get the impression that he’s a firearms virgin, but like every red-blooded American, he’s a natural-born killer who finds his inner NRA.

Director Roland Emmerich, who first destroyed Washington in Independence Day (1996), is an old hand at obliterating national monuments. In fact, during the White House tour that precedes the invasion, the guide  pays homage to that very movie, explaining which part of the building got blown up. Emmerich has assembled an overqualified cast of Oscar-pedigree talent for his live-action cartoon. Jamie Foxx is wildly un-presidential as James Sawyer, a Democratic president struggling to win a second term. Channing Tatum keeps his head down and does the job as John Cale, a B-list bodyguard who fails a job interview for the Secret Service conducted by a former classmate (Maggie Gyllenhaal), then has the dumb luck to be trapped with the man he’s dying protect when the White House is attacked. Cale’s 11-year-old daughter, a precocious fan of everything presidential, tags along to the job interview and ends up a hostage—which leads to tasteless scenes of the villain (Zero Dark Thirty‘s Jason Clarke holding a gun to her head.  As the Secret Service director, James Woods is suitably snaky. And Richard Jenkins does his best Hollow Man number as the Speaker of the House.

But going to White House Down for the actors is like reading Playboy for the articles. It’s all about the action, which leaves a massive body count and demolishes enough federal property to create that apocalyptic frisson now integral to every action movie’s DNA. But I have to admit I enjoyed the fact that no aliens or robots were involved. Small mercies, I know. Call me old-fashioned but I was happy just to watch a trio of Black Hawk helicopters perform a convincing ballet around D.C.’s landmarks (though less enchanted by the armoured-limo car chase churning up the White House lawn).

Trying to rationalize this guilty pleasure is like trying to defend the unsung virtues of crack cocaine. But one last note: I was blown away by a soundtrack choice in the final minutes of the movie—warning: this is the only spoiler alert really necessary in a film that unfolds with crushing inevitability—but amid the patriotic swoon of the movie’s final shot, I don’t think anyone would have expected to hear Street Fighting Man by the Rolling Stones.

Everywhere I hear the sound of marching, charging feet, boy / Cause summer’s here and the time is right for fighting in the street . . .

I guess even Roland Emmerich has fantasies of being Scorsese. But what can a poor boy do but to make another dumb-ass action movie? Summer’s here and the time is right.