Of pedals and metals: In search of bike maestro Giuseppe Marinoni 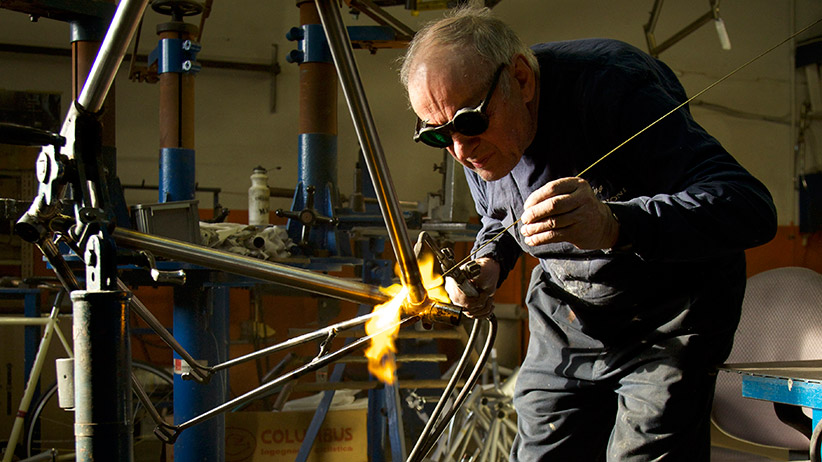 Giuseppe Marinoni’s 75-year-old body is bent over a bicycle frame, teasing tubular steel with a welding torch. He heats the rear dropouts, the rear brake mount and the the bottom bracket till they are red hot. Save for the hiss of the torch, there is no noise to his art. Then Marinoni opens his mouth. “If you are here to film me to learn how to make bicycles, that’s fine,” he bellows at the camera, his shirt smeared and his hair a mess. “But you do it once and that’s it, because since you’ve been filming I’ve never welded so badly in 20 years. It’s stressful. The welds feel the stress.” The camera stays on and Marinoni goes back to work, muttering something in his heavily Italian-accented French joual, about young people not willing to work for their Technicolor dreams.

Yet as Montreal filmmaker Tony Girardin shows in Marinoni: The Fire in the Frame, a quirky and uplifting character study of a cycling legend, Marinoni is blessed with a huge heart that has pumped the passion and poison of bike racing for four decades.

A bike collector, Girardin practically tripped over his subject about six years ago, when he discovered a Marinoni frame in the basement of a bike shop in Drummondville, Que. “The bike spoke to me somehow: the curves, the colour, the detail with which it was built,” Girardin says, echoing the sentiment of road cyclists and fixed-gear buffs the world over. He figured it was built in Italy; with a little research, he found out all Marinonis come from the Montreal suburb of Lachenaie.

The film follows their designer for a year in his adopted home of Montreal and in Italy, where Marinoni attempts to break the “hour record” for his age category—the longest distance pedalled around a velodrome track in one hour. Both pursuits require a stubborn constitution. There are few people building steel frames by hand in an age of machine-pressed carbon fibre. Fewer still would try to break a cycling world record at 75.

“It took me about three years to convince him to let me make a film about him,” Girardin says. The biggest obstacle, not surprisingly, was Marinoni himself, who bristled at the prospect of being followed around by this 39-year-old filmmaker, amateur architect and bicycle aficionado. The breakthrough came with the record attempt: Girardin convinced Marinoni and his wife, Simone, of the worth of filming it. “Very quickly they realized that my documentary intentions were much broader in scope than just his record attempt,” Girardin says. Girardin rarely turned off the camera once he’d wedged himself into Marinoni’s life. He set up an office in the Marinoni factory, to be around when his whimsical subject did something film-worthy. “His random nature is the reason why I decided to do the film myself. It would have been impossible to coordinate filming with a camera operator or a sound person,” Girardin says.

This partnership gives the film a buddy-flick feel, in which Marinoni’s reluctance gradually fades and he reveals more and more of himself, including how he sweated red for two years when he took up cycling after a 20-year hiatus—he maintains it’s all the paint and welding fumes in his guts—and his wishes for his remains once he passes away. (Spoiler alert: he’s not particularly sentimental.)

But its most poignant moments come when Girardin turns his camera on Jocelyn Lovell. One of Canada’s most celebrated cyclists, Lovell won drawerfuls of medals, including a silver at cycling’s UCI World Championships in 1978, on which he rode a custom Marinoni. In 1983, while on a training run, Lovell was struck by a truck, leaving him paralyzed from the neck down. Lovell was once larger than life with an ego to match; the accident has reportedly left him bitter. Yet in the film he is wistful about his accomplishments and humbled by a visit from Marinoni, who used Lovell’s frame in his attempt to break the hour record.

Marinoni has (reluctantly) toured with Girardin on the documentary circuit; it was a top-ten audience favourite at Toronto’s Hot Docs festival. And the old man will be there when Marinoni premieres in Montreal in November—a homecoming for a reclusive local hero who builds bikes and outraces time.