Remembrance daze: 42, The Place Beyond the Pines, and Trance

Despite the fact that Hollywood has harnessed its fortunes to the blockbuster engine of sci-fi futurism, our love of the movies is fundamentally a romance with the past. The Dream Factory traffics in memory and myth. Sometimes a film feels like the fabric of memory itself.

Opening this week are three films of radically different genres that frame the past: 42, which enshrines baseball legend Jackie Robinson; The Place Beyond the Pines, a tale of crime and punishment that bleeds through generations; and Trance, a riddling intrigue of amnesia and mind control. Maybe I’m feeling especially charitable to movies that are not about heavily armed Americans saving the world from foreign megalomaniacs bent on world domination, but I happen to like all three of these films—up to a point.

This inspirational story of Jackie Robinson, the first black baseball player in the major leagues, does justice to one of America’s most beloved and essential heroes, a heroic athlete who became the lead-off hitter for the civil rights movement. It’s styled as a history lesson wrapped in an old-fashioned Hollywood motion picture, a moral drama that swings for the fences in big, broad strokes and hits the message right out of the park. And the style feels utterly appropriate. With a subject so deserving of mythology, a figure plucked by history to be a hero in a brutally uncomplicated era of black and white conflict, it’s a movie that makes us want to cheer.

It’s really the story of two men. Brooklyn Dodgers GM Branch Rickey, portrayed by a crusty Harrison Ford, is the instigator. He decides he wants a black ball player on his team and goes about casting one, knowing full well that havoc will ensue. After a talent search in the Negro league, he picks Robinson, and gives him a spot on the Dodgers’ Montreal farm team, then the Dodgers, to the consternation of virtually everyone in baseball. He tells Robinson, somewhat disingenuously, that his motives are financial. “New York’s full of Negro baseball fans,” he growls. “Dollars aren’t black or white.” But Rickey is a deeply religious Methodist, and a crafty apostle for civil rights. He knows he needs a black player who can both hit, run and turn the other cheek under the inevitable storm of racist abuse. “I want a player who’s got the guts not to fight back,” he tells Robinson.

There’s a sweet synchronicity to the casting. As Robinson, the rookie designated to make history, Chadwick Boseman, a rookie actor, make his own impressive debut in Hollywood’s major leagues. He’s surrounded by big, flashy scenery-chewing performances. But just like his character, he can’t respond in kind; he has to keep his cool. Boseman radiates intelligence, charisma and athletic prowess. He holds down the lead role with the most natural and unadorned acting in the picture. And it’s a star-making performance. He’s well complimented by Nicole Beharie, who plays the resolute Rachel Robinson. Every mention of “Mrs. Robinson” may carry an unfortunate echo of Anne Bancroft, but this Robinsons’ affair is a fairytale marriage, as ideal and debonair as that of the Obamas.

A hero without imperfections can be problematic. But Jackie’s nobility is more than well-earned, and tarnishing it for the sake of balance would be churlish. Besides, there’s enough evil at loose among the white characters. Although 42 is a deeply conventional studio picture on many levels, what’s shocking and almost without precedent are the racist diatribes that are unleashed against Robertson, especially from Philadelphia Phillies manager Ben Chapman (Alan Tudyk)—a vile torrent of bigotry that’s painful to watch. It’s a paradoxical sign of progress that, in movies like 42 and Django Unchained, it’s now permissible to portray blistering volleys of the n-word onscreen.

Writer-director Brian Helgeland doesn’t have an impressive box score—he wrote Mystic River and directed A Knight’s Tale. But he establishes a strong, consistent tone for 42, which unfolds with the relaxed pace of a ballgame. Smartly, the script doesn’t try to package Robertson’s entire life in a single biopic. It focuses on his recruitment, and his first year breaking the colour bar on white teams. Although 42 is not as far inside baseball as, say, Moneyball, it seems to get it right, with a flurry of exciting and graceful plays that honour the poetry of the game. And for a movie so consecrated to the heroic partnership of two men (Robinson and Rickey), Helgeland has fielded a rich team of supporting players, notably Christopher Meloni (Oz, True Blood), who gives an explosive performance as Robinson’s first Dodgers manager, who is forced to give his racist players a brutal lesson in tolerance. By contrast, Andrew Holland is smoothly understated as Wendel Smith, a black reporter who offers to be Robinson’s African American media coach, his “advance man”—Smith has to perch his typewriter on his knees in the stands because he’s not allowed in the press box.

As for Harrison Ford,  I worried about him at first. He has a chronic propensity to overact eccentricity, and was scenery-chewing from the word go. But he sinks his teeth into the role with such gruff gusto that he turns excess to his advantage. It’s a kick to see this retired action hero remake himself as a grumpy old man. He’s right at home in a film that’s boldly unafraid of cornball sentiment, embracing it as a god-given right, as native to baseball—and Hollywood—as peanuts, popcorn and Cracker Jacks.  Add soundtrack and stir: nothing enhances the heroism of baseball quite like an anthemic surge of French horns. 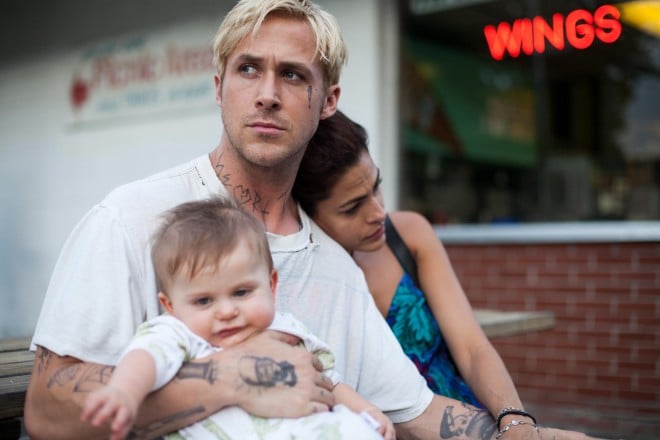 The Place Beyond the Pines

It’s become known as the latest Ryan Gosling movie. And Gosling’s latest incarnation—as a bleach-blond, heavily tattooed motorcycle-riding bank robber—is certainly the more flamboyant role. But the movie belongs equally (at least) to his co-lead Bradley Cooper, who’s cast in a less sensational but more complex part. To have Hollywood’s two Hottest Actors and Sexiest Men Alive cast in the same indie movie seems like an embarrassment of riches. But there’s little opportunity for them to go mano-a-mano. They inhabit separate stories, separated by a 15-year gap, and joined in the middle by a fateful scene in which their lives collide.

The movie is written and directed by Derek Cianfrance, who teamed up with Gosling for Blue Valentine, another narrative split between two eras. But in this case he doesn’t toggle between the time frames; they’re laid out sequentially as distinct acts. You wouldn’t want to give away much of the story. Suffice it to say that we meet Luke (Gosling) as a stunt motorcycle racer who performs in a traveling carnival. Passing through Schenectady, N.Y., he reconnects with Romina (Eva Mendes), who has mothered his child without letting him know. Luke quits the carnival, gets hired by a low-life auto mechanic (Ben Mendelsohn), and in a naive attempt to provide for his son, starts robbing banks, using his motorbike as the getaway vehicle. That  puts him on a collision course with Avery (Cooper), a rookie cop. As for the second act, let’s just say it belongs to Avery, the over-educated cop, who is the son of a judge, and whose ambitions lead him to clash with a corrupt police force in the persons of Ray Liotta and Bruce Greenwood.

The performances are uniformly superb. If anything, Gosling is the weakest link. When you’ve got a smart actor playing a dumb guy decked out in a lot of punk regalia, he can’t help but seem a bit mannered. Still, even if his portrayal of a stunt rider is a feat of stunt acting, it’s engaging. And Cooper is terrific in ways I can’t begin to describe without spoiling the movie.

And after watching Gosling then Cooper, a couple of phenomenal teenage actors come out of nowhere to drive a third act—Dane DeHaan and Emory Cooper as the sons of Gosling and Cooper.

Tautly directed by Cianfrance, The Place Beyond the Pines evokes a haunting sense of character, mood and location—while offering hope that over-celebrated Hollywood stars can still find room to take risks, with the right filmmaker.

Danny Boyle’s latest midway ride has more twists and turns in the first half hour than most movies offer from beginning to end. Starting out as a heist movie, then somersaulting through a cirque of reveals, trysts and betrayals, Trance is a shape-shifting harlequin of a movie that doesn’t add up–but is fun while it lasts. James McEvoy stars as Simon, an art auctioneer who teams up with a gang of thieves to steal a Goya painting. As the plan hits a snag, Simon receives a blow to the head, then wakes up with no memory of where he hid the painting. Led by Franck (Vincent Cassel), he tries torture, and when that doesn’t work they hire a hypnotherapist (Rosario Dawson) to mine the depths of his subconscious.

That’s just the start of a preposterous narrative that doesn’t know when to stop turning tricks. But I have to say, I was never bored. Trance may not be believable, but in the spirit of its conceit, it is hypnotic. Ever since Trainspotting, Boyle has shown a knack for seducing us with trippy visuals that simulate various states of delirium, paranoia and euphoria—whether drug induced or (in the case of 127 hours) hallucinated by a man pinned by a rock in a cave. Boyle pursues filmmaking as an extreme sport, and his appetite for euphoria is contagious. Although it never achieves grace or coherence, Trance—whose title could refer to the musical genre as easily as the hypnotic state—plays as  a disco inferno of stray ideas about art, eros and crimes of the heart, all set to a soundscape that makes you wish you were in the movie, on some impossibly good designer drug, rather than merely watching it.

McEvoy plays the anti-hero at the heart of the movie’s existential riddle. And he does the job. But thanks to Cassel and Dawson, Trance is also pretty damn sexy. Cassel is a the kind of sleepy-eyed predator who makes a fine art of holding his cards close to his chest, while Dawson is an Everymale fantasy of a foxy therapist dressed to coax your innermost secrets right out of your skin. 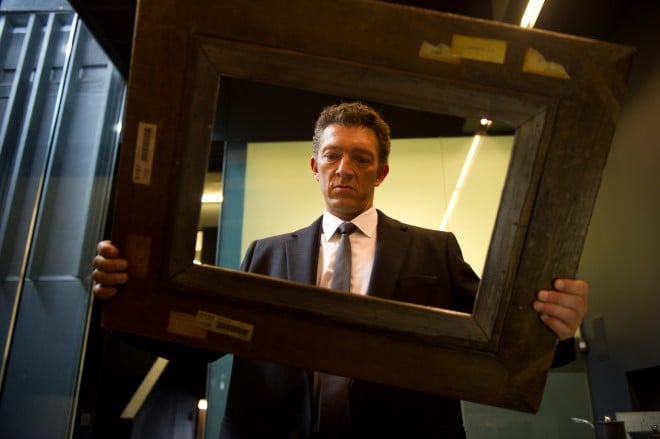