Finally, a buddy movie with a narrative arc built around chemo 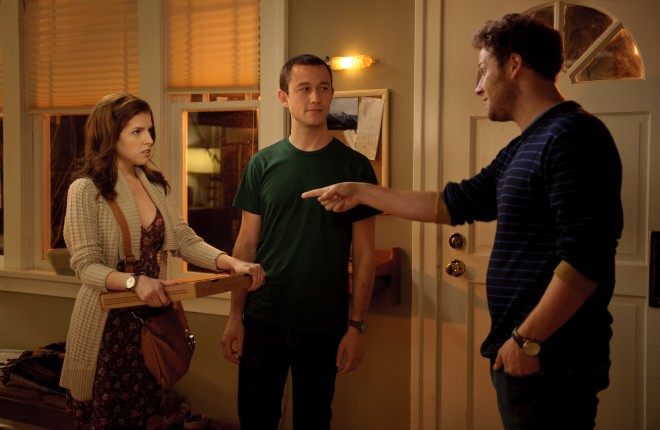 Cancer comedy. Now there’s a genre you don’t run across every day. In fact,  50/50 may well be the first  of its kind—a buddy movie with a narrative arc wrapped around chemotherapy sessions. Not that it’s all laughs. The comedy/drama ratio is about 50/50, the odds that Adam (Joseph Gordon-Levitt), the story’s shy and charming protagonist, is given to survive after a large and rare tumour is discovered next to his spine.

Although the script is apparently not autobiographical, it was inspired by screenwriter Will Reiser’s own experience as a young cancer survivor—he was diagnosed with just such a tumour after working as an associate producer on Da Ali G Show with Vancouver writers Seth Rogen and Evan Golberg (the Vancouver high-school mates who would go on to make Superbad.) The film is not just shot in Vancouver, by the way, but explicitly set in Vancouver.

Directed by Jonathan Levine (The Wackness), 50/50 is essentially a buddy movie, with Rogen co-starring as Kyle, Adam’s best friend and ebullient wing-man. As soon as the diagnosis drops, Kyle is whipping out the upbeat one-liners: “Every celebrity beats cancer! Lance Armstrong, he gets it all the time. . . Patrick Swayze . . . Oh, he’s dead? . . . 50/50! If you were a casino game you’d have the best odds!”

After Adam’s girlfriend turns out to be an unsupportive bitch, Kyle tries to get him laid, coaching him to use the C-card to pick up girls—”Get to the cancer thing faster. That’s your hook man.” That, of course, takes a bit of practice. Adam, meanwhile, as a young patient in an old man’s game, latches onto a couple of older cronies in chemo, all of them smoking their blues away with prescribed pot.

Insofar as 50/50 is a romantic comedy, Anna Kendrick (Up in the Air) provides the spark. As Adam’s therapist, a rookie who hasn’t yet learned to draw boundaries, she emerges as a cutely inappropriate love interest in a courtship so shy it’s virtually Victorian. As in any buddy movie, however, the main love story is between the guys. And there’s rich odd-couple chemistry between the raw, irrepressible Rogen and the wry, repressed Gordon-Levitt.

While some of 50/50 stoner tropes have a familiar ring,  I can’t think of a film that has explored cancer treatment in such clinical detail, never mind one that still manages to be entertaining. Much of the humour exploits the sad ineptitude of friends and family who don’t have a clue how to behave—Angelica Huston is priceless as the mother who manages to make her own distress more traumatic than her son’s condition. In the end, the tears of laughter and sadness meet halfway and merge, with billows of medicinal marijuana easing the pain. As Rogen might say, this is one cancer movie that’s not a bummer.