Sinister depths: 'Stoker' and 'The Gatekeepers' 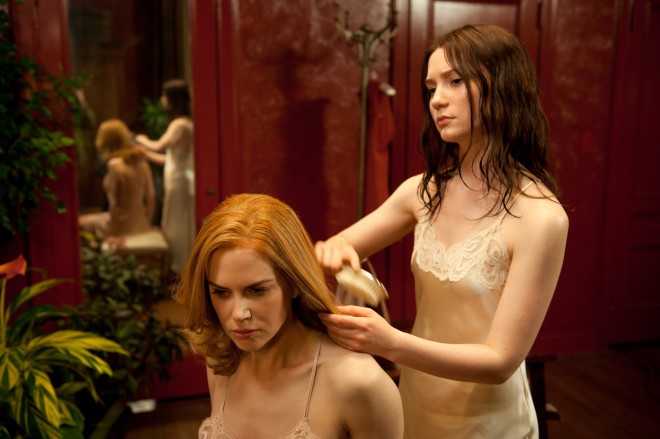 Opening this week are two very different movies about killing. Stoker, a diabolical thriller about a toxic family, is an acquired taste. The Gatekeepers, an Oscar-nominated documentary about Israel’s war on terror, is required viewing. Both explore the banality of evil.

If you want to replace the grey winter chill with something closer to the marrow—a bright, cold shock of beautiful cruelty—you might consider Stoker, an ultra-stylish horror movie for those who can handle a frisson of incest and like to see their blood splattered with sparse, painterly precision. Stoker marks the English-language debut of Korean filmmaker Park Chan Wook (Old Boy, Lady Vengeance) whose refined sadism has made him a cult favourite, and prize winner, in Cannes.

Mia Wasikowska (Alice in Wonderland) stars as a privileged young woman named India, whose world is shattered by news that her father has been killed in a car crash on her 18th birthday. Uncle Charlie (Matthew Good), a mysterious man she didn’t know existed, shows up the funeral, acting strange and far too pleased with himself for someone who has just lost his brother. Before long, he has enchanted India’s unhinged mother, Evie (Nicole Kidman), while pursuing her anxious daughter with predatory gleam in his vacant gaze. Directed like Hitchcock on acid, Stoker unfolds from the teenager’s point of view as a perverse coming-of-age story, while Goode, who bears a marked resemblance to Tony Perkins, plays the crazy uncle as if channelling Norman Bates. But as the sexual tension heats up in this incestuous love triangle, it becomes clear that Uncle Charlie is not the only one who’s crazy. The whole family is psycho.

The film is billed as a psychological thriller, but Park’s operatic style ensures that it never sinks into anything so mundane as realism. The story’s plausibility is often risible, and the director’s archly esthetic flourishes routinely upstage the characters, along with compulsive detours into camp comedy. But each of the actors is a treat to watch. As the charming psychopath with a bottomless stare,  Goode is wildly creepy. Kidman, who seems in the mood to take risks with off-the-wall roles these days—most recently in the noir train wreck of The Paperboy—plays a bad, brittle, sex-starved mother with a brio that’s almost too convincing.  And Wasikowska, who anchors the story as its only restrained and complex character, keeps us guessing every step of the way.

Park’s exquisite visuals are so stagy and meticulous he could be accused of simply showing off, and burdening the story with much beauty. Yet the movie’s brazen mix of eros and violence casts a genuinely disturbing spell. The violence, when it comes, is acute, but also acutely originally—right from its first wince of pain, a shot of India pricking a blister on her toe. Park directs with such lyrical assurance that, even as we’re conscious of being coolly manipulated, this narcotic thriller gets under the skin and arrests the pulse, like an injection administered by a night nurse with a deeply sinister sense of humour. 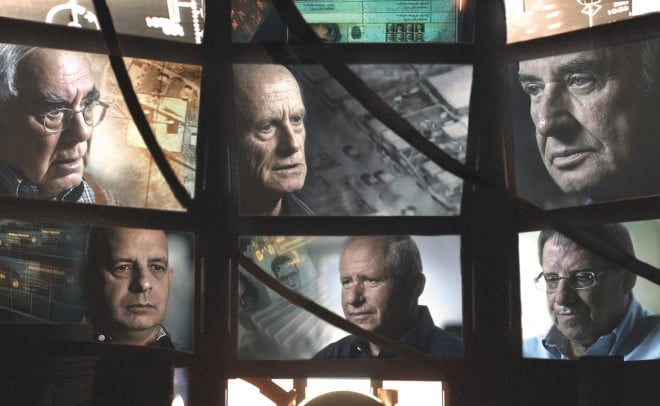 The Gatekeepers, which opens in Toronto, Montreal and Vancouver this week, is one of two Oscar-nominated documentary features about the Israeli-Palestine conflict. The other is 5 Broken Cameras. These pictures come from absolute opposite ends of the telescope, yet they reach a surprisingly similar conclusion—that Israel’s escalating campaign of homeland security is ultimately futile and absurd. 5 Broken Cameras is a Palestinian farmer’s video chronicle of five years in his village of Bil’in, in the Israeli-occupied West Bank. It plays like a homemade movie, as each of his cameras is destroyed in mid-shot, sometimes by bullets, by Israeli soldiers attacking peaceful demonstrators.

The Gatekeepers is a more sophisticated work. Directed by Israeli cinematographer Dror Moreh, it’s constructed around interviews with six former chiefs of Shin Bet, Israeli’s secret service, who have all come to relax their hard-line views and take a more conciliatory approach to their enemies. In fact they all now believe in a two-state solution. The film, which spans three decades of Shin Bet’s operations, serves as a capsule history of Israel’s war against terror, viewed though the eyes of the men who were most intimately involved. These are intelligence experts, and the intelligence of their own reflections, filtered through the long lens of age and retirement, is palpable.

As these spymasters look back over their roles in massive campaigns to infiltrate, imprison, interrogate and destroy an uncontainable, endless enemy, they display degrees of remorse. But their common attitude is more one of deadpan despair, and frustration with the political process. “The Shin Bet has interrogated tens of thousands of people, if not hundreds of thousands,” says one of its former directors, implying that the sheer scale of its operation was evidence of its futility. All six men seem to agree that trying to contain an entire population was, in retrospect, absurd, and that the conflict has been fed by an inexorable feedback loop of terrorism and counter-terrorism. “There was no strategy, just tactics,” says one. “The tragedy of Israel’s public security situation is that we won the battle but lost the war.” As for ethics—”forget about morality.”

The film tracks the progress of terrorism from the relative sane PLO to the fanatics of Hamas, from rock-throwing mobs to suicide bombers. But some of the most dramatic moments come as Shin Bet confronts the enemy within—the right wing Jewish extremists bent on their own course of terrorism against those seeking peace. As they plot to blow up the Dome of the Rock, it becomes clear that they, even more than Arabs, could ignite a total conflagration in the Middle East.

The Gatekeepers is reminiscent of post-apartheid documentaries in which former South African secret police look back on their legacy. It also recalls The Fog of War, Errol Morris’s documentary profile of former U.S. Defense Secretary Robert S. McNamara. When the men look back on their role in dispassionate killing, they can’t help but be haunted, no matter how justified they felt at the time. As we watch aerial footage of surgical bomb strikes on terrorist targets, a former Shin Bet director talks about the sad inevitability of collateral damage. But even the most pristine assassinations of those who would murder Israelis do not leave the conscience clean. And amid the current debate about U.S. drone strikes, the issue couldn’t be more timely.

Moreh conducts an implicit an interrogation of the interrogators. And though his film is built around half a dozen talking heads, like Morris, he frames his group memoir with eerie visuals and a fugue-like soundscape. The result is a mesmerizing documentary that distills some simple, devastating truths from a vast swath of complicated history.