Slapstick birding? 'The Big Year' is a big turkey 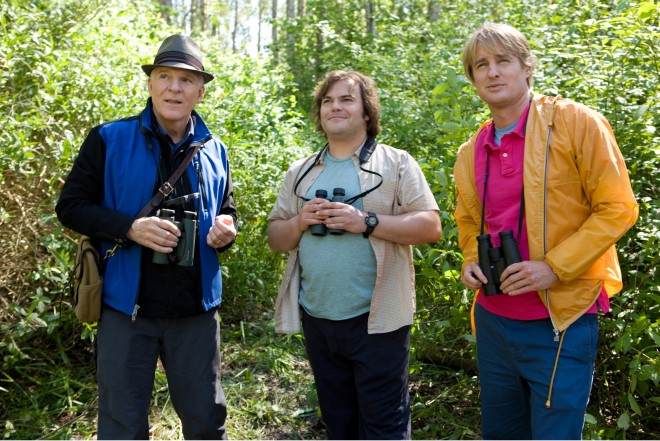 (from left) Steve Martin, Jack Black and Owen Wilson in 'The Big Year'

Superlatives are all too tempting in this business. But honestly, I can’t remember the last time I saw a movie so crammed with talent that was such an unmitigated mess as The Big Year. Just take a look at the roster. Aside from the three iconic amigos who star as duelling birders—Steve Martin, Owen Wilson and Jack Black—the cast also boasts Dianne Weist, Anjelica Huston, Rosamund Pike, Brian Dennehy and Tim Blake Nelson. Even John Cleese shows up for a cameo voice over. The director, David Frankel, is also a proven quantity, having brought an assured touch to both The Devil Wears Prada and Marley and Me. So what the hell went wrong?

From what I can gather, the filmmakers simply didn’t trust the material, and torqued it so far into farce that it flew right out of control. The movie is based on Bob Obmascik’s non-fiction book, The Big Year: A Tale of Man, Nature and Fowl Obsession (2004), a fascinating glimpse into the arcane world of competitive birding. It focusses on a group of men battling for the title of sighting the most birds in a single year, a contest based on an honour system without referees. Right off the bat, a title card tells us the movie is “a true story,” and that just “the facts have been changed.” That’s one of the film’s better jokes. Not that there’s anything wrong with demolishing facts to make a good movie. But The Big Year‘s facile plot, clichéd dialogue and hectic pacing destroy any glimmer of credibility. This is a movie that asks us to believe that birding is a slapstick world of squealing car chases and diabolical dirty tricks—roller derby with binoculars. Within the first few scenes, a car crashes into a tree and a toilet flies through a window.

Our three fanatical birders—Owen Wilson plays the reigning champion trying to defend his title; Steve Martin is a high-flying CEO who’s playing hookey from his corporate empire; and Jack Black is the underdog hero who’s trying to log a Big Year—are tearing around the continent and racking up debt while working at a full-time job. Wilson’s character is a complete snake, willing to betray his long-suffering wife (Rosamund Pike), who’s undergoing fertility treatments. Martin’s character is also willing to desert his wife, but she doesn’t seem to mind one bit. And Black’s character is longing to score with a fellow birder who seems way out of his league (Rashida Jones). None of these relationships seem plausible. Black is his usual mugging self, doing fat-boy pratfalls and making goo-goo-eyed appeals for our sympathy. Wilson is always watchable, but his attempt to bring warmth to such a venal characters seems pointless. Martin, who takes Black under his wing, is Mr. Nice Guy, but he’s so ingratiating that his charm falls dead. It’s strange to see him appear so unattractive. And unfunny. There’s more wit in any one of Martin’s tweets (@SteveMartinToGo) than in this entire bird-brained movie.