Spike Lee's anti-Trump masterpiece: 'This film is a wake-up call' 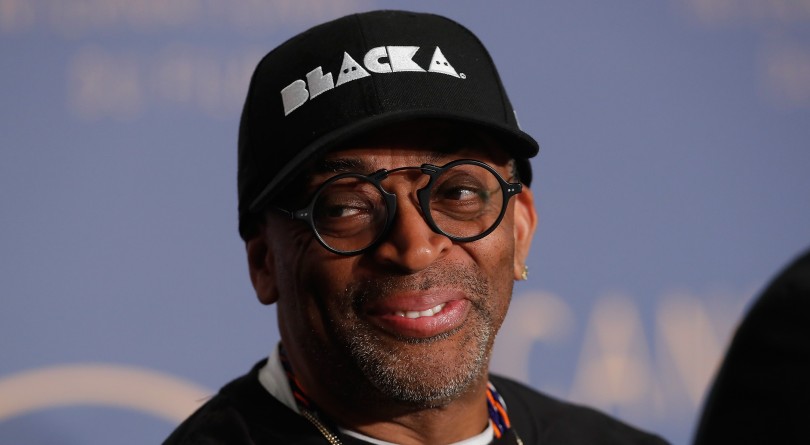 Spike Lee speaks at the press conference for 'BlacKkKlansman' during the 71st annual Cannes Film Festival at Palais des Festivals on May 15, 2018 in Cannes, France. (Photo by Sebastien Nogier/EPA Pool/Getty Images)

It’s rare to see a director compelled to spoil the ending of his movie. But the morning after the world premiere of BlacKkKlansman sent a shock wave through Cannes, that’s exactly how Spike Lee greeted a press conference before anyone even had time to ask a question—explaining how he came to end his movie with an epilogue of harrowing footage from last August’s deadly white supremacist rally in Charlottesville, Va.

Set in the early 1970s, BlacKkKlansman is based on the stranger-than-fiction true story of Ron Stallworth (John David Washington), an African-American undercover cop in Colorado Springs who infiltrates the Ku Klux Klan by phone, and becomes a registered member, while a white fellow officer, Flip Zimmerman (Adam Driver), impersonates him in the flesh.

Much of the movie plays as a richly entertaining period film, juiced with broad comedy and Shaft-like heroics, but it’s framed with chilling flashbacks to a racist Hollywood, from Gone With the Wind to Birth of a Nation, and riddled with allusions to the white-supremacist origins of Donald Trump’s America First sloganeering.

BlacKkKlansman, which triggered a tumultuous standing ovation in Cannes and an initial volley of positive reviews, is being hailed as a serious comeback for Lee. Extending the militant promise of Do the Right Thing (1989) and Malcolm X (1992), it arrives as a major landmark in the history of American movies about racial injustice. It’s a picture with operatic sweep and virtuosic swagger and with a wild story that whipsaws between comic scenarios of nut jobs in a KKK clubhouse and visceral depictions of racial violence. Also, it blithely reclaims the giddy soul of Blaxploitation pics for a higher purpose, as it lays down a Black Panther gauntlet on the doorstep of Donald Trump.

Lee credits a younger African-African filmmaker, the Oscar-winning director of last year’s horror comedy Get Out, for initiating the project. “Jordan Peele called me out of the blue and told me the story of the real-life Ron Stallworth, and it sounded like a David Chappelle skit,” he said. “Our job was to connect this period piece to the present day. What’s happening now did not just pop up out of thin air.”

Which brings us back to film’s incendiary coda. (This calls for a spoiler alert, even though we’re dealing with non-fiction and the director has already revealed the ending). As the story reaches its electrifying climax, Lee allows us to revel in Stallworth’s slam-dunk triumph against the bigots he has been baiting. It’s the ultimate feel-good moment. But then he abruptly changes channels—to the horrifying images of carnage in Charlottesville. The sequence is composed of documentary footage showing white supremacist violence in all its brutality, including a graphic scene of the car plowing into a crowd of protesters, killing 32-year-old Heather Heyer and wounding 35 others. It’s one thing to watch fragmentary clips of the event on CNN, but quite another to see a real-life murder play out on the big screen as an uncensored, seamlessly-edited sequence, framed with Trump’s fatuous declaration about “very fine people on both sides.”

“That ending was not written,” Lee told the press conference. He explained that he had finished making the film, and was in Martha’s Vineyard when he saw the news of Charlottesville. He immediately decided it should be added to the ending. But he first sought permission from Heather Heyer’s mother, and would not have included it “without her blessing.” Having won her approval, his team put ads in newspapers and social media, soliciting footage of the event from multiple angles and countless sources.

Lee has also persuaded the film’s Hollywood distributors to release BlacKkKlansman worldwide on Aug. 11, the anniversary of the Charlottesville tragedy. “It was an ugly, ugly, ugly blemish on the United States of America,” he said. “This was like a mini civil war battle without the guns. It was fists, sticks and bats. Where the f–k were the police?”

“That scene had to go in,” insisted Lee, which makes you wonder if he met some resistance. Then he launched into an enraged manifesto: “The United States of America was built upon the genocide of native people and slavery. We look to our leaders to give us direction, to make moral decisions, and this is not just something that pertains to the U.S.A. This right wing bulls–t is all over the world and we have to wake up. We can’t be silent.  It’s not black, white, brown, it’s everybody. This film is a wake-up call. Stuff is happening, it’s topsy-turvy, and fake has been trumpeted as the truth. That’s what this film is about. I don’t care what the critics say, we’re on the right side of history.”

Lee was so intent on excoriating Trump and the state of world democracy, that sadly he had little chance to talk about the particulars of his film, which is ground-breaking in so many ways. It’s not just a movie about racism, but about how racism has been represented in American movies—right from the opening sequence, an SNL-worthy bit that casts Alec Baldwin as an early KKK demagogue fluffing his lines as he struggles to make a propaganda film.

Compounding the meta nature of the story is the fact that the undercover cops played by Washington and Driver are essentially actors trying to pass themselves off as outrageously toxic bigots. Here the comedy gets complicated. Quentin Tarantino notwithstanding, there has never been a mainstream American movie fueled with such an extravagant volume of profane racist invective—toward Blacks and Jews—as this one. The n-word is spat out dozens of times, as the cops try to outdo the white-supremacist bozos they’re working to impress. These scenes have some hilarious moments, but they go so far over the line, they take your breath away. You don’t know if it’s safe to laugh. And that’s part of the tension that makes Lee’s film so powerful.

While the movie ridicules the KKK rank and file as a moronic gang that couldn’t shoot straight, a young David Duke (Topher Grace), the organization’s Grand Wizard at the time, emerges as a coolly insidious customer, intent on legitimizing the far right. “We need people like you and me in public office for America to achieve its greatness again,” he proclaims in a speech that’s clearly a winking nod to Trump. But unsurprisingly, the most powerful speeches in the film attack racism, including a stunning oration by Harry Belafonte as an elder statesman, describing the 1916 lynching, dismemberment and burning-alive of Jesse Washington, a 17-year in Waco, Tex., convicted of murdering a white woman.

With BlacKkKlansman, Spike Lee’s career comes full circle. His dynamic star, John David Washington, is the son of Denzel Washington, and he made his screen debut in Lee’s Malcolm X, playing the nine-year-old version of Denzel’s protagonist. And Lee first vied for the Palme D’Or in Cannes 21 years ago with Do The Right Thing, only to be beaten out by a young white novice named Steven Soderbergh, who took the festival’s big prize for Sex, Lies and Videotape. Lee was outraged at the time, and claimed he’d been robbed.

This time around, there’s no question that BlacKkKlansman is a leading contender for the Palme. On face value it would seem an irresistible choice for Cate Blanchett’s jury—an opportunity to strike a public blow against Trump while giving Spike Lee some poetic justice and enshrining his status as Black America’s most essential filmmaker. But you never know. Cannes is in the habit of favouring high art over commercial potential. One thing that might be held against the movie is that doesn’t need a prize to succeed. It’s a crowd pleaser, backed by a Hollywood studio that will send it around the world. Spike has already got our attention.