Squandering Anne Hathaway and Jim Sturgess 'One Day' at a time

Lone Scherfig's One Day is sad and frustrating 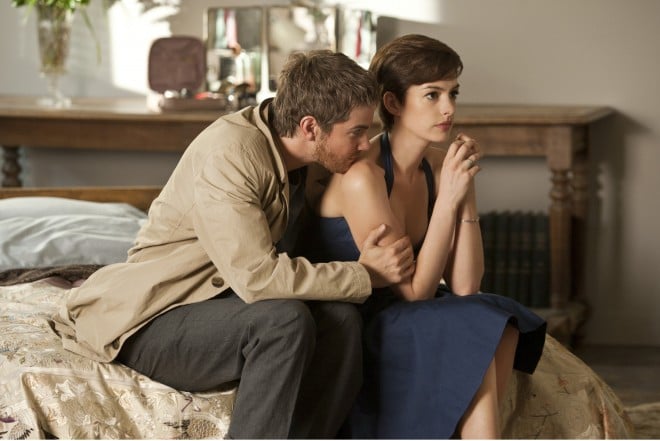 Sometimes, one day can last forever. One Day is a bittersweet romantic comedy that lasts about two hours and feels interminable. This tale of  unrequited love is more like an unrequited film. Set in mostly England, the story is stretched over two decades. Dexter (Jim Sturgess) and Emma (Anne Hathaway) meet cute’n’drunk on their graduation day, then hook up again on the same date (July 15) each year, morphing into sexless best friends—obvious soulmates who routinely fail to nail the romantic destiny that is staring them in the face. It’s a Groundhog Day of the heart. I came out of the cinema sad and frustrated, not by the lovers’ missed opportunities for romance, but by the missed opportunity of the movie. It’s a crying shame.

I had high hopes. There’s a lot of high-pedigree talent at work here. Both Hathaway and Sturgess are witty, charming, attractive actors, and there’s mostly nothing wrong with their performances They acquit themselves with a natural grace. The director is Lone Scherfig, who drew an Oscar-nominated performance from Carey Mulligan in An Education. But One Day is as sprawling and shapeless as An Education was perfectly modulated. The problem lies in the script, which David Nicholls based on his own best-selling novel. Letting an author adapt his own book is usually a mistake. Few writers are willing to perform the kind of radical surgery required to turn a book into a film: there’s nothing more lifeless on screen than a literally faithful adaptation. One Day unfolds as an episodic slog through 20 years of misfiring courtship, a romance rationed out on the installment plan. With clever calendar graphics ushering in each year, the One Day conceit soon wears thin. And the maddening twist in the final act, which I won’t reveal, seems utterly unearned.

Emma is a bookish working-class gal who spends most of the movie stuck with loser jobs and loser guys. In this role, Hathaway is woefully miscast. It’s simply not credible that such a smart, gorgeous, and apparently flawless woman would spend years serving tacos at a Tex-Mex restaurant while settling for a creepy failed comedian as her default boyfriend (Rafe Spall, son of actor Timothy Spall). With schematic symmetry, Dexter is her polar opposite: a spoiled rich kid who gets trapped in a vacuous career as the host of a cheesy TV show, his moral compass washed away by endless alcohol, cocaine and bimbos. This degenerate detour lasts for many years as Emma waits for the love of her life to become human again. Sturgess is unconvincing in the bad boy role. The bad boy act comes across as impersonation, which the actor would no doubt rationalize by saying that his character has become encumbered with a shallow, ill-fitting persona, but that makes it no less annoying.

One Day has lofty ambitions, and there are pleasures to be had as it struggles to fulfill them. There is genuine chemistry between the two leads, no matter how perversely thwarted. Hathaway, who masters an impeccable English accent, is never less than radiant, an Audrey Hepburn redux. Ken Stott and Patrica Clarkson bring nuanced detail to their minor roles as Dex’s distraught parents. And the film is beautifully shot, with a sharp eye to the ever-changing periods. But the richness of the palette and the performance only compound the ultimate sense of loss.

When you see a great movie, it often feels like a miracle—so many things have to go right, and so much can very easily go wrong. But One Day is a rare example of a miraculous failure. It’s astonishing that so much talent could produce such crushing tedium.