Straight outta their element? The high stakes of the N.W.A. biopic

There's more nostalgia for hip-hop's halcyon days than ever—and, as a result, a lot of pressure on 'Straight Outta Compton' 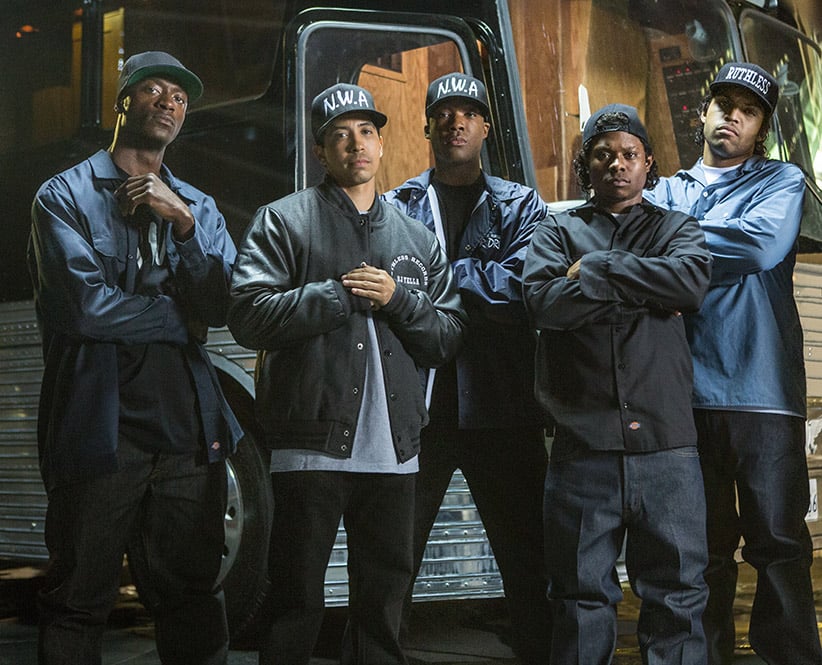 (L to R) MC Ren (ALDIS HODGE), DJ Yella (NEIL BROWN, JR.), Dr. Dre (COREY HAWKINS), Eazy-E (JASON MITCHELL) and Ice Cube (O’SHEA JACKSON, JR.) in “Straight Outta Compton”. Taking us back to where it all began, the film tells the true story of how these cultural rebels—armed only with their lyrics, swagger, bravado and raw talent—stood up to the authorities that meant to keep them down and formed the world’s most dangerous group, N.W.A. (Jaimie Trueblood)

The making of Straight Outta Compton has been embattled, to say the least—a fitting reality for a movie about N.W.A., the L.A. gangsta rap crew consisting of Ice Cube, Dr. Dre, Eazy-E, MC Ren and DJ Yella, a group that rose in a gleeful eruption of id and violence before quickly combusting amid beefs and betrayal. Filming in Compton, a neighbourhood still riven by gang violence, cost a man his life over the course of the movie’s production. A casting call was accused of being racist (it ranked girls from A to D, with “D Girls” described as “African American girls… Poor, not in good shape”). Movie theatres have been under scrutiny for decisions to hire additional security during screenings, a visible double standard for a movie about black men, and a particularly sad one, given the group’s railings against police and their treatment of black people. And MC Ren, one of its original five members, has complained bitterly and loudly about the movie’s depiction of his role in the group.

But there is one character who was even more marginalized than him.

“Compton is the sixth member of N.W.A.,” Ice Cube said in an interview with Power 105’s Breakfast Club. “Compton is a part of the movie, it is the backdrop; you do feel like this is why these youngsters from this area decided to go at it this hard.”

And yet, despite his adulations, Compton is merely sketched out in stray brushstrokes: a quick shot of glistening candy-coloured low-riders, bouncing on hydraulics; a darkened street suddenly awash with the red and blue of police lights. A plurality of the non-N.W.A. songs aren’t even from L.A.-based artists; there was as much Run-DMC and Wu-Tang Clan than there was, say, West Coast pioneer group Uncle Jamm’s Army, or the sun-dappled funk sounds of a budding West Coast scene.

A portrait of Compton is hardly the only thing missing. Most notably, before he was a hip-hop mastermind and mogul, Dr. Dre also assaulted hip-hop journalist Dee Barnes in 1991; that incident mysteriously never makes the cut. (Dr. Dre and Ice Cube are executive producers and were heavily involved in the making of the movie.)

But hip-hop in biopic form is still a new frontier for a genre still trying to find out what it means to be at the centre of pop music. And Straight Outta Compton, a very good film on its own, proves that it’s willing to play by the biopic rules and concede things that could have made it truly great amid the expectations around it.

The pressure on it is, after all, enormous. The fervour over hip-hop nostalgia is at an all-time high in 2015. Earlier this summer, the movie Dope, a modern-day bildungsroman steeped in ’90s rap, came out to critical adulation. Ed Piskor’s excellent comic book series Hip-Hop Family Tree blends history with traditional superhero stylings. And there’s been plenty of buzz around the 2016 Netflix series The Get Down, a fictionalized retelling of hip-hop’s earliest days, from Oscar-nominee Baz Luhrmann. Famously, Adam Gopnik of The New Yorker established a 40-year rule for when cultural touchstones become cool again—though given our proclivities for ’90s pop and Buzzfeed quizzes, that timeline has shortened. And hip-hop, whose golden age came 25 to 30 years ago, is right in the thick of it.

And a hip-hop biopic is still a novelty. If you ignore 8 Mile, the thinly veiled Eminem biopic-or-isn’t-it, and the TLC biopic CrazySexyCool, which was straight-to-TV, the most significant to date has been 2009’s mediocre Notorious, about the New York City legend Notorious B.I.G., which had a rather successful opening weekend before losing steam at the box office. There hasn’t been another effort since. So given the big-time expectations on this film—behind a massive promotional push, including a (gasp) new Dr. Dre album inspired by the film, the initial box-office take is expected to win the weekend—there is the sense that Straight Outta Compton‘s success will dictate the future of the form.

So it’s little wonder that Straight Outta Compton tries to be a more universal film in its storytelling; it tries to be the hip-hop film, rather than the N.W.A. film, a specific film about a time and a place. There are benefits to this: A film about a response to violence against black people, amid the Black Lives Matter movement, is particularly timely. But there are some things that are lost in this telling; the rise of the West Coast from a hip-hop backwater to an essential mecca is a crucial turning point in the genre, for instance, and a deeper telling of N.W.A. as essential drivers to wider change.

But these are the kinds of concessions you have to make for a big-market major-studio film to become reality. Hip-hop has definitively become the centre of pop music, but that’s not the case for movie studios. And when you’re among the first, the onus is on you to be good—and therefore, be inclusive. In this way, Straight Outta Compton is a victory: in turning an sprawling narrative into a movie, when there aren’t many like it, the best thing to do is follow the rules of a by-the-numbers biopic.

So here is the hater who tells the group that rap will never work, the cop that says bluntly that “rap isn’t art,” the losers we laugh at because we know how this story turns out, and that history proves them wrong. Here are the often mawkish Eureka moments, like the one where Dr. Dre noodles at the keyboard until he just happens to come across the famous snaking riff on Snoop Dogg’s Nuthin’ But a G Thing, and oh, here comes Snoop down the stairs, freestyling the first verse right away. And then here are the exceptional performances from stunning look-alikes: Jason Mitchell, who nails the oozing charisma of Eazy-E; Corey Hawkins, whose broad features lend his Dr. Dre an accurate gravitas; and O’Shea Jackson Jr., who doesn’t just look like he could be the son of Ice Cube—which, in fact, he is—but rather a person who budded off the original, like a Jheri-curled hydra.

There’s not a lot that it does differently from other biopics, but what it does, it does very well. And yes, it smoothes over controversial issues that would derail the easy telling of a redemptive rags-to-riches tale, but then, that’s the biopic trope.

Yes, it’s hagiography—but then, that’s the nature of the form. And it’s a logical fit for a genre built on hagiography and braggadocio, too.

Follow the rules: It’s advice that N.W.A., in their ferocious peak, never would have taken. But then again, Ice Cube is now a caricature in big-budget comedies, and Dr. Dre is in the mogul business (as the credits remind you, with an unsubtle boast about Apple’s purchase of Beats by Dre, and indeed, it’s perhaps a sign of restraint that there wasn’t a Eureka moment with a young Dre looking at the shape of a large pill, and nodding his head solemnly as he invents an overpriced, flimsy, capsule-shaped speaker).

Hip-hop biopics, moving ahead, will be better off that they did. Straight Outta Compton is a good movie that will pave the way for better ones in the future.

Listen to The Thrill, Maclean’s culture podcast, discuss Straight Outta Compton (and more) here. Subscribe for free now on iTunes or on Stitcher.