The Butler: Hit and miss, though Oprah steals every scene 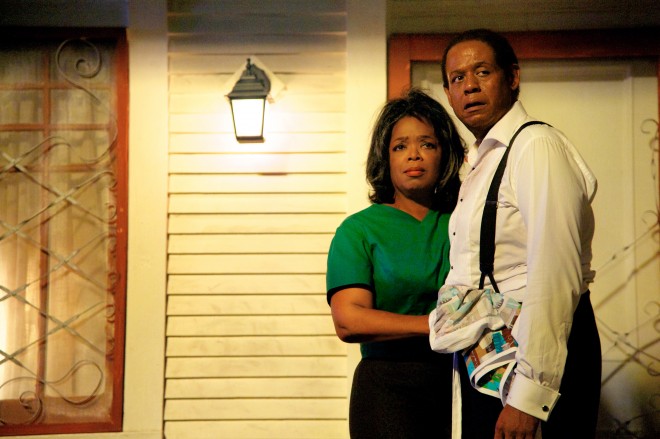 This is turning out to be an exceptional year for black filmmakers mining true stories of race and violence in America. Last month saw the release of Ryan Coogler’s Fruitvale Station, an explosive drama about the last day in the life of Oscar Grant, a 22-year-old black man who was shot dead by police while handcuffed in an Oakand subway station on New Year’s Day in 2009. At next month’s Toronto International Film Festival, one of the most hotly anticipated premieres is Steve McQueen’s 12 Years A Slave, about Solomon Northrup, a free-born African American who was kidnapped in 1841, sold into slavery, and rescued by a Canadian abolitionist (Brad Pitt). And opening this week is Lee Daniels’ The Butler, a star-studded epic inspired by the life of a dedicated butler who served under eight presidents in the White House while the civil rights movement raged outside its walls.

Unlike the other two movies, The Butler is fiction, although its audience may assume otherwise. Those cagey words “inspired by a true story” can be deceptive. The script was triggered by Wil Haygood’s 2008 Washington Post article “A Butler Well Served by This Election.” Published after Obama’s landmark victory, and later spun into a book, it unearthed the story of former White House butler Eugene Allen, who served American presidents for 34 years. But screenwriter Danny Strong (HBO’s Game Change) has created a fictional butler named Cecil Gaines (Forest Whitaker), whose life mirrors the drama of the civil rights movement with cut-glass symmetry.

Straining to serve an overcharged agenda, The Butler is a broadly entertaining, bluntly inspirational history lesson wrapped around a family saga that gives new resonance to the term “domestic drama.” Director Lee Daniels (Precious, The Paperboy) is not known for subtlety, and this movie is no exception. But at the heart of its sprawling narrative, he has corralled some fine performances. Whitaker navigates gracefully between his public and private personae—White House butlers he says, have two faces: their own “and the ones we got to show the white man.” As Cecil stoically weathers the upheavals of history, and his splintered family, we can feel him being gradually crushed under the weight of his own quiet dignity, yet mustering shy increments of resistance over the decades. Between his role as a virtually mute servant/sage in the White House and a beleaguered patriarch trying to hold together his middle-class family, this a character with a lot on his plate. The real surprise is Oprah Winfrey, who’s blessed with a juicy, freewheeling role, and shows once and for all she can really act, stealing every scene with a saucy gravitas, if there can be such a thing. With a performance that’s charismatic yet deeply grounded, she sails through a character arc that ranges from drunken feints at infidelity to ferocious loyalty—undercut with droll asides that are impeccably timed.

The story’s long march begins with Cecil’s boyhood on a cotton plantation in the South in 1926, where he sees his father shot dead in a field for looking the wrong way at a white man. Cecil is adopted by a thin-lipped matriarch who tells him, “I’m going to teach you how to be a house nigger.” Which sounds strange coming from the mouth of Vanessa Redgrave. The term “house nigger,” and the n-word in general, recurs again and again, shocking us each time, and never letting us forget that there’s no higher house than the White House.

A model of shrewd obedience, Cecil learns to make the perfect martini, to be invisible in a room, and to overhear affairs of estate in stony silence—unless asked for his opinion, which he’ll pretend to offer with a wry, Delphic diplomacy that makes the questioner feel validated. The script goes out of its way to ennoble Cecil’s work, plucking a quote from Rev. Martin Luther King Jr. —”the black domestic defies racial stereotyping by being hardworking and trustworthy … though subservient, they are subversive without even knowing it.”

The Uncle Tom issue is front and centre, especially in Cecil’s feud with his radicalized son Louis (David Oyelowo), who rejects his father as a race traitor. The conflict comes to a head amid a family debate about the merits of Sidney Poitier, a legendary actor brashly dismissed by Louis as “a white man’s fantasy of what he wants us to be.” The fondly nostalgic references to In the Heat of the Night and Guess Who’s Coming to Dinner may fly over the heads of younger viewers. But it’s a lovely scene, mixing rancour and wit and a deft touch. Although this is a movie on a mission, it does have a sense of humour. When Cecil’s eldest son, shows up to dinner in his Black Panther beret and black leather, with a girlfriend sporting a vast Angela Davis Afro, it’s pure caricature as Daniels presents a whole other take on Guess Who’s Coming to Dinner, played as both drama and farce.

The story is a bit of a slog. It unfolds against a parade of presidents that amounts to a clumsy sideshow of cameos. Some are dismal, beginning with a ludicrous incarnation of Dwight D. Eisenhower by Robin Williams desperately trying not to look like Robin Williams. John Cusack’s Nixon is a bad joke. James Marsden’s John F. Kennedy is too young and callow—JFK as just another pretty face. But Liev Schreiber throws some mustard on a snappy portrayal of Lyndon B. Johnson. And an almost unrecognizable Allan Rickman creates a masterful Ronald Reagan, complemented by Jane Fonda’s brief, brilliant turn as Nancy. First The Newsroom, now this; Hanoi Jane has grown up to be an expert at playing ballsy Republican grand dames.

Despite the film’s shortcomings, it does its job. The tragic events of America’s race war, no matter how schematically presented, burn through the narrative with potency. Intercutting horrific scenes of bigots disrupting a lunch counter protest in the South with shots of a black butlers setting fine china for a White House dinner may be contrived, but they’re brutally effective.

With his hit-and-miss direction, it’s as if Daniels is the movie’s ultimate butler, juggling an overloaded tray as he tries to serve all sides of history at once. He’s most assured in the scenes of Cecil’s extended family, which swing from rollicking banter to bitter conflict, and least comfortable in his role as history teacher.  Every so often I kept wishing Spike Lee were behind the camera, cutting through clichés. Though The Butler‘s tidy sentiments can be  cloying, it’s hard to remain unmoved—and unimpressed by the stubbornly authentic performances by Whitaker and Oprah, which will likely be remembered at Oscar time.