The Lone Ranger: Pirates of the Wild West

Johnny Depp's Tonto is a lost cause, a slapstick noble savage chasing his own authenticity 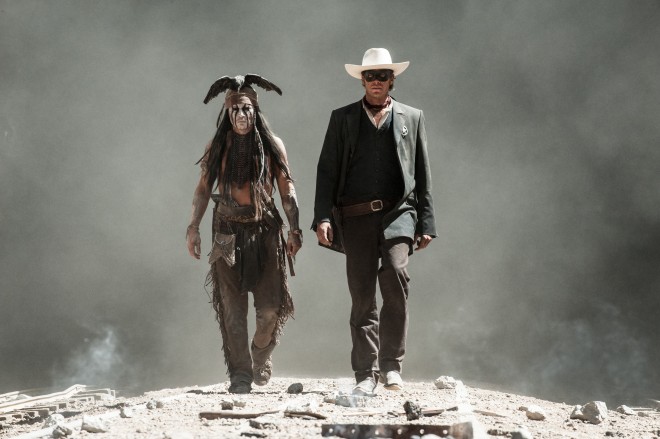 I’m old enough to remember watching The Lone Ranger on TV as a young boy in the 1950s. It was one of two western buddy series that were popular in the extremely limited universe of this new black-and-white miracle called television.  The other was The Cisco Kid. Both involved a cartoon-like minority sidekick—Tonto, the The Lone Ranger‘s virtually mute Native companion, and Pancho, the jolly Mexican who served as the Cisco Kid’s second banana. (I assume both Tonto and Pancho are uncredited clones of Don Quixote‘s Sancho Panza.) Now Johnny Depp tries to turn the old cowboys-and-Indians business on its head with a blockbuster adventure that elevates Tonto from silent sidekick to the story’s true hero. He is introduced with a corny framing device. In a natural history museum, a young boy in a Lone Ranger costume stumbles across a diorama of “The Noble Savage in His Natural Habitat,” featuring a relic of an aged Tonto, who suddenly comes to life and starts to tell the boy the “truth” about the legend of the masked man.

It’s an awkward set-up for an overcharged agenda—an attempt to correct a cliché of frontier history and create an all-you-can eat western stocked with every cliché in the book. At the heart of it, Depp takes on an impossible task, trying to breathe life into the wooden stereotype of Hollywood’s noble savage with an oddball mix of hocus pocus and deadpan farce. His newly empowered Tonto, of course, is no mere sidekick. He actually creates the Lone Ranger, as he rescues an earnest lawman named John Reid (Armie Hammer), the sole survivor of a criminal ambush, and hands him his mask and his outlaw mission. Throughout the movie, Tonto is in charge behind the scenes, while the blustering Lone Ranger serves as his not-too-swift straight man. In the blockbuster biz, this is known as an origin story—designed to originate a hero, and maybe a franchise.

But it seems doubtful this $250 million epic will do well enough to justify sequels. There’s no modern precedent for a blockbuster western. The landmark westerns of the past few decades have been high-pedigree Oscar dramas, such as Dances With Wolves, Unforgiven and True Grit. As for a western franchise, there hasn’t been one in living memory, unless we count Star Wars. Of course, this isn’t just a western. The movie’s transparent intent is to cast Depp as the outlaw anti-hero of a frontier Pirates of the Caribbean, a Pirates of the Wild West. But the actor seems to be in over his head, as he struggles to to restore the dignity of a Native character who never had any dignity in the first place—though in the TV series he was at least played by a Native, Canadian Mohawk Jay Silverheels.

In an previous piece—A white man as Tonto—is that kosher?—I speculated about Depp’s latest trickster incarnation, wondering if he could get away with playing such a meta stereotype. I’m not sure he does. He’s dancing as fast as he can, trying to animate a wooden Indian, but he only seems to dig himself in deeper with every move. Depp never seems fully comfortable in the role, and not just because he’s got a dead bird on his head. Tonto, who is so clearly akin to Pirates‘ Jack Sparrow, lacks Sparrow’s blithe authority and stumbling self-possession. As his anxious eyes dart from whiteface warpaint (a more impenetrable mask than the Lone Ranger’s), Depp seems to be hiding behind a cautious reverence for a mystical Native America. His Tonto, a trickster/sage willing to play the white man’s fool, is more of a totemic construct than a character, a slapstick Indian chasing his own authenticity. And when he speaks—something the original Tonto rarely did—his “accent” sounds contrived, still rooted in a toxic stereotype. (The formula: speak perfectly good English with a halting cadence and omit the articles.) It’s unoriginal, and a far cry from the brilliant, rubbery diction that Depp pirated from Keith Richards to create Jack Sparrow. Hammer, in fact, shows more wit and poise than his co-star, even though his character has been demoted to a bit of dufus.

And the movie? Produced by Pirates mogul Jerry Bruckheimer and directed by Pirates veteran Gore Verbinski, it’s a rollicking action adventure that leaves no trope unturned. This is a western made by a guy who wants to pay tribute to every western ever made, in case he never gets another chance. Verbinski cooks up a dog’s breakfast of styles, with homages running the gamut from John Ford to Sergio Leone. And in case you don’t catch the Leone references, the score generously quotes Morricone. There are also bouts of antic comedy that owe a grand debt to Buster Keaton, plus enough special effects and impossible stunts to qualify our heroes as bona fide superheroes, though they have no special powers aside from mythic branding.

The philosophy behind the movie, which stretches to two-and-a-half hours seems to be the same one that inspired the all-you-can-eat Vegas buffet. Just give ’em lots of everything. There’s a full declension of villains, including a railway baron (Tom Wilkinson), a cavalry officer (Barry Pepper)—and a butt-ugly cannibal played by a snaggle-toothed William Fitchner. This western is no place for a woman, but a couple of actress flit in and out in thankless roles, including Helena Bonham Carter as a sharp-shooting peg-legged madam. Oh, I almost forgot. A horde of rabbits with fangs also make a brief and mysterious appearance in the desert. Why? Who knows. The filmmakers have boasted that this movie, unlike Pirates of the Caribbean, takes place in the “real” world, without supernatural elements. But I guess when someone suggested rabbits with fangs, they just couldn’t help themselves. There’s no logic to the story, just a bunch of stuff. Even the Lone Ranger’s eventual transformation from bumbling greenhorn to virtuosic cowboy action hero just happens, with no real explanation .

On the plus side, the movie offers ample spectacle, with stunning vistas that give Utah’s iconic Monument Valley a starring role (though the story is set in Texas). And much of the action is thrilling, if preposterous. A lot of it takes place on a train, an iron horse that absurdly competes with the flesh-and-blood variety as the Lone Ranger rides Silver along the top of the rail cars. Overall, I have to admit enjoying the stunts, the horses and some of the extravagant set pieces—just grateful to be watching humans and animals tearing up a natural landscape, rather than aliens and zombies warring over the apocalypse. The movie’s pièce de résistance is a climactic action sequence set to a rousing, marathon version of the William Tell Overture, the TV’s show theme that made everyone forget William Tell. It’s a fabulous payoff to a shambling mess of a movie. Having watched the TV show so often, and at such a tender age, I felt as if my entire DNA was joining in. How younger audience might respond, I have absolutely no clue. And I suppose that’s true of the whole picture.