The spirit of the rainforest is ready for her close-up

A new IMAX film displays the splendour of B.C.'s Great Bear Rainforest, the risks it faces and the vital relationship First Nations groups in the area have with the ecosystem—and the mystical spirit bear 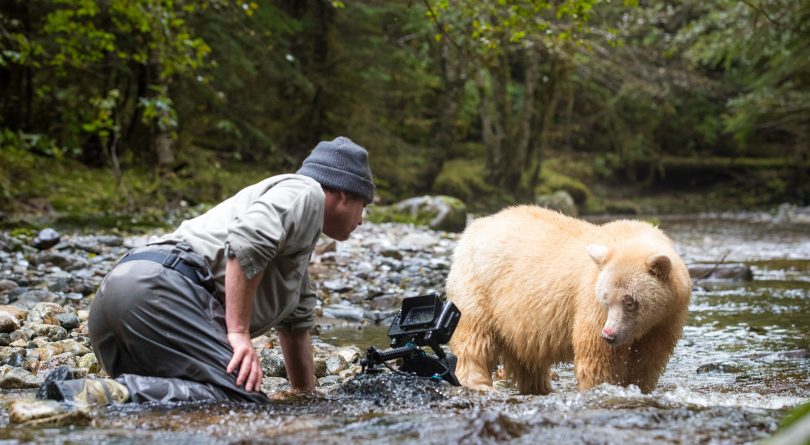 Don’t be fooled by the cream-coloured coat; that’s no polar bear. A Kermode or “spirit” bear, is a subspecies of the North American black bear. It owes its colouring to a rare genetic mutation, and can be found in British Columbia’s Great Bear Rainforest. Climate change and ocean pollution are threatening to upset the delicate ecosystem of the temperate rainforest. The region’s ecological fragility and its symbiotic relationship with the area’s Indigenous groups are the subject of conservationist Ian McAllister’s new film, Great Bear Rainforest—Land of the Spirit Bear.

The film is interspersed with intimate shots of Moks, the spirit bear with the doleful gaze pictured here. (Moks is short for Moksgm’ol, Tsimshian First Nation for “spirit bear.”) McAllister was crouching in the pool, originally waiting to capture shots of salmon. “I looked down the creek and around the bend comes walking this beautiful spirit bear.” Moks was hunting for lunch, roughly two feet from McAllister. If you look closely, you can see a daub of bright red on her nose–evidence of a salmon feast. “To be sitting side-by-side with this incredible bear, watching it fishing for salmon… it’s a wildlife filmmaker’s dream.”

Such nonchalance, while astonishing, is commonly seen in the film, which follows spirit bears that have lived in harmony with First Nations groups in the area for thousands of years. If the animals’ food supply is secure, says McAllister, they tend to regard humans as part of the landscape.

Moks, a central figure in the film, is an older matriarch who’s had many cubs. But she’s still an adept fisher. “She’ll sit there patiently, forever, and you think she’s almost fallen asleep standing up,” says McAllister. “Then she jumps at this high speed and scoops up the fish right in front of you. In some ways it was difficult to film her catching salmon because you never knew when she’d jump into action.”

The film is out now. See where it’s playing here.

Photos from “The Great Bear Rainforest – Land of the Spirit Bear” 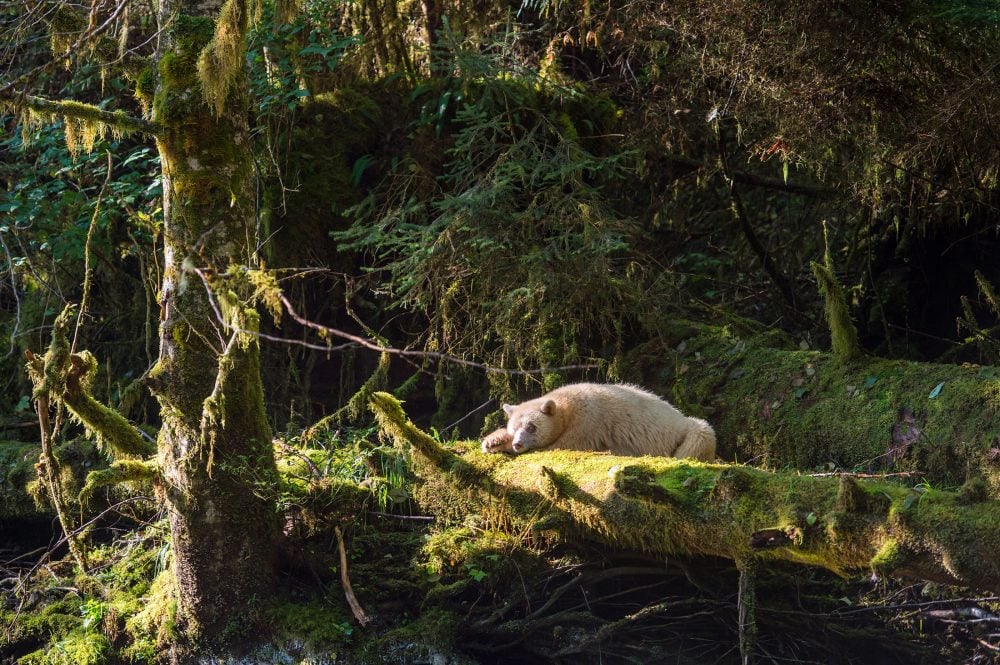 Moks has a snooze.