Three classic dystopian flicks were set in 2019. Did they hit the mark?

Blade Runner, Akira, and The Running Man all offer dystopian views of 2019. That says something about the present we're currently living—but not in the way you think 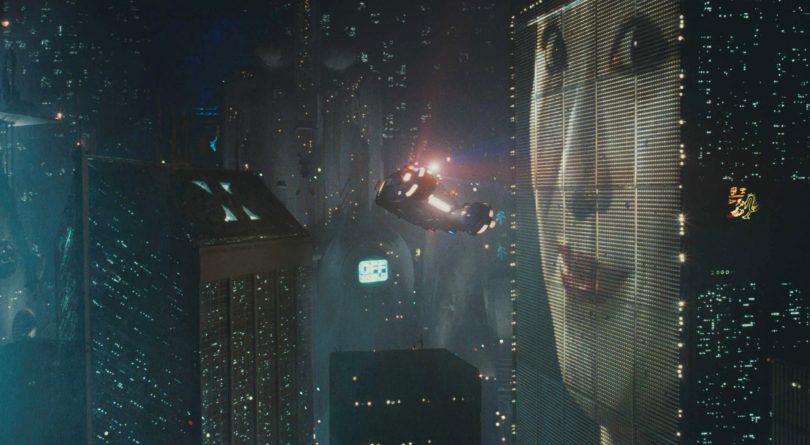 Not far from his California home, Steven E. de Souza—the writer of such Hollywood blockbusters as Die Hard, Commando and 48 Hrs.—strains to see the sun.

Smoke from a deadly fire that has raged for weeks has choked the sky into a yellow pall, and he shakes his head as he bemoans the explanation from the reality-TV host who is now president of an increasingly riven United States. “Between the drought, the hot summer, the global warming and everything, it’s worse every year,” says the 71-year-old. “It’s not mismanagement of forests, as someone might say.”

It’s just dystopian enough to sound like a plot ripped from one of de Souza’s scripts; in fact, it’s eerily reminiscent of his 1987 film The Running Man. In the movie loosely adapted from a Stephen King novel, economic devastation has led the American government to quell dissent with a glitzy, gladiatorial reality show. While a resistance works to undermine a powerful, hammy network president, technology that’s able to seamlessly doctor any video threatens to upend lives by making fiction look like fact. The movie even takes place in 2019. But rather than exult in his fortune-telling prowess, de Souza demurs. “I’d rather less of it came true. I’d rather that a reality-show host wasn’t president,” de Souza says. “It’s not my fault! I know I wrote it, but it’s not my fault!”

The Running Man joins two other brooding science-fiction classics—1982’s future-noir Blade Runner and 1988’s cyberpunk bloodbath Akira—as movies with 2019 as the backdrop. And watching them now feels coincidental, if not providential: Blade Runner, with its gritty Asia-inflected aesthetic, considers the ethics of enslaving and killing robots—a timely issue given advances in artificial intelligence. In Akira’s 2019 Tokyo, which is racked with anti-government protests and cults, the titular character—a godlike psychic—is awakened from beneath a stadium under construction for the following year’s Olympic Games; Tokyo will actually host the Games in 2020.

Science fiction from the past has long inspired the present. Captain Kirk’s communicator on the TV show Star Trek drove Martin Cooper to develop the handheld mobile phone in 1973; Stanley Kubrick’s 2001: A Space Odyssey influenced the first tablet computers. The inventor of the electric stun gun loved the Tom Swift science-fiction books that he read as a youth, and in tribute to one of those stories, he named his device “Thomas A. Swift’s electric rifle,” or taser for short. By witnessing fiction become reality, we became hopeful about the future. After all, if the future inevitably delivers the technological bounties promised by sci-fi, won’t it keep delivering?

“Science fiction premediates our relationship to this idea of the future and the different possibilities for the future,” says Baryon Tensor Posadas, a faculty member in the University of Minnesota’s Asian languages and literatures department who specializes in Japanese cinema and science fiction. “It anticipates how we might respond to different kinds of social upheaval and events, almost scripting it in advance for us.”

But loving science fiction’s fortune-telling properties ignores the fact that the genre is really a reflection of the world in which it was created, rather than a prediction of what’s coming. While the collision of show business and politics in The Running Man seems to predict Trump, de Souza’s dog-eared copy of The Selling of the President—a 1969 book that details Roger Ailes’s efforts to market Richard Nixon’s election campaign—and the presidency of Hollywood cowboy turned politician Ronald Reagan were much more direct reference points. “All these things were in my mind as subtextual ideas, but as I thought about concepts for the movie, they came closer and closer to the surface,” he says. “I’d like to say, ‘Oh, it was all my genius,’ but it was actually a lot of low-hanging fruit that was already in the world in that long-forgotten era of 1987.”

Moreover, how we interact with these artifacts actually tells us much about how we’re feeling about the present. These movies were made in the 1980s, when sci-fi took a dystopian turn. By finding resonance in them, we reveal that our optimism about society’s trajectory is dying. “We’re now more ingrained to imagine the world ending than any kind of social change,” says Posadas. 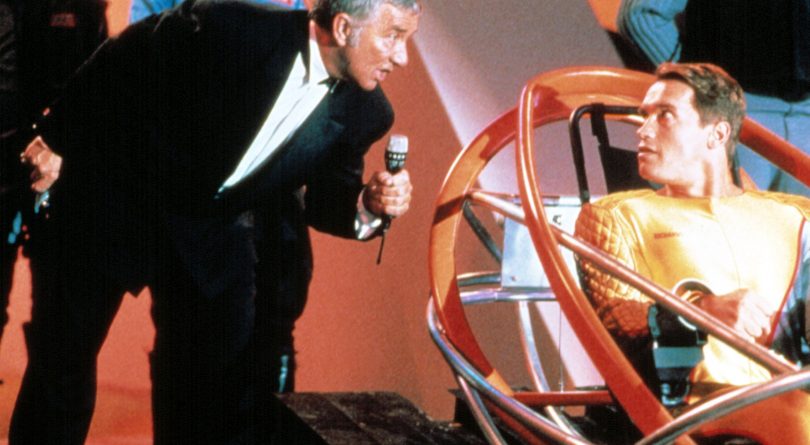 Made in 1987, “The Running Man,” with Richard Dawson and Arnold Schwarzenegger is set in 2019. (Everett Collection)

Still, sometimes, science fiction literally does create the worlds it invents—and in stranger ways. The Running Man is, after all, about a future in which politics and entertainment have become one, and two of its stars—Arnold Schwarzenegger and Jesse Ventura—actually went on to become governors of U.S. states. And it was during a conversation in Schwarzenegger’s trailer during the shooting of The Running Man that de Souza actually encouraged the star to consider politics.

“There was some California representative who was a complete nutjob on TV, and Arnold said, ‘This guy should be banished from the Republican Party,’ ” de Souza says. “I said, ‘Well, Arnold, instead of just giving them money, why don’t you run for something?’ He said, ‘Yeah right,’ and I said, ‘No, seriously!’ So I’ll take some blame for that—or credit.”

An Austrian bodybuilder going from powerlifting to taking power in America’s most populous state, thanks in part to a film vehicle that skewered the blurred line between celebrity and politics? Some things are stranger than science fiction.