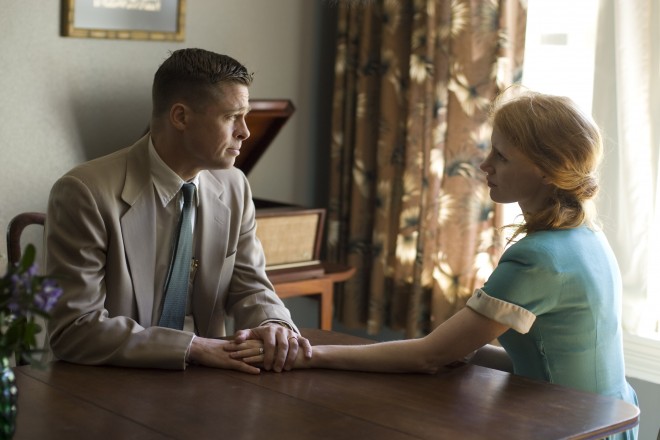 Brad Pitt and Jessica Chastain in 'The Tree of Life'

Breaking news from the Toronto Film Critics Association. (Full disclosure: I’m TFCA president, so if  much of what follows may appear to plagiarize the official press release, that’s because I can write this stuff only so many times.)

Two cosmic dramas about stubborn American patriarchs emerged as the biggest winners of the 2011 TFCA Awards. The Tree of Life, Terrence Malick’s transcendental epic about boyhood and the end of innocence in 1950s Texas won Best Picture, while Malick was named Best Director. Also honoured with two TFCA awards was Take Shelter: Michael Shannon won Best Actor for his portrayal of a father plagued by apocalyptic visions, and Jessica Chastain was named Best Supporting Actress for her role as his conflicted spouse. (Chastain was also a runner-up in the Supporting Actress category for The Tree of Life.)

By championing The Tree of Life, the TFCA diverged from the New York and Boston critics groups, which both chose The Artist, and from the L.A. critics, who picked The Descendants—two films that ranked as runners- up among the TFCA’s three Best Picture nominees.

Michelle Williams was voted Best Actress for her seductive, in-the-moment portrayal of Marilyn Monroe in My Week With Marilyn. Canada’s Christopher Plummer won Best Supporting Actor for his role in Beginners as an elderly man who comes out of the closet after learning he has terminal cancer. And Best Screenplay went to Moneyball, the story of Oakland A’s general manager Billy Beane, written by Steven Zaillian and Aaron Sorkin, story by Stan Chervin, based on the non-fiction book by Michael Lewis.

The TFCA honoured two movies by Chilean directors. Mysteries of Lisbon was named Best Foreign-Language Film. Adapted from the classic Portuguese novel, this epic four-country odyssey is one of the final works of Chilean master Raul Ruiz, who died last August at the age of 70. Winning Best Documentary Feature was Nostalgia for the Light, Patricio Guzmán’s meditation on Chile’s Atacama Desert, which draws links between the stars viewed by the desert’s astronomers and the search for buried remains of General Pinochet’s victims.British writer-director Joe Cornish’s Attack the Block, a thriller in which a South London gang battles an alien invasion, won Best First Feature.

The TFCA Awards will be presented at The Carlu in Toronto Jan. 10, 2012. There the TFCA will also reveal the winner of the Rogers Best Canadian Film Award, which carries a $15,000 cash prize. The three pictures nominated by TFCA members are: Café de Flore, directed by Jean-Marc Vallée, A Dangerous Method, directed by David Cronenberg, and Monsieur Lazhar, directed by Philippe Falardeau.

Here’s the full list of TFCA winners and runners-up: