Two Adam Sandlers are worse than one

In 'Jack and Jill,' Sandler's idea of playing a woman is to shriek with a lisp; Pacino dishes up self-parody 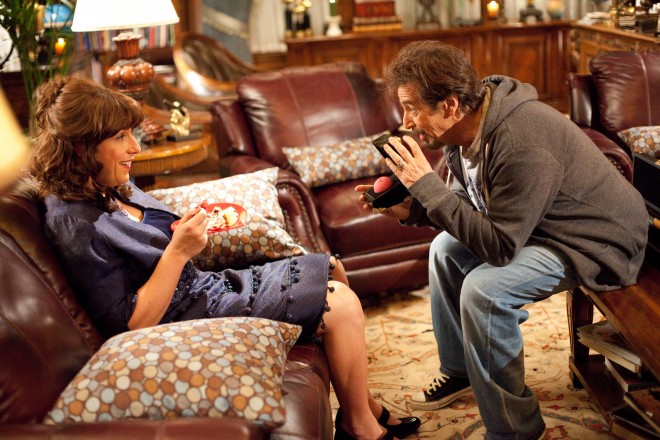 Adam Sandler and Al Pacino in 'Jack and Jill'

Full disclosure. I’m not an Adam Sandler fan. As a comedian, I think he’s smug, vain, mean-spirited . . . and not funny. As an actor, he can be pretty interesting. In fact, the only time I’ve really appreciated Sandler is when he’s not in an Adam Sandler movie. Like when he played a disturbed obsessive in Punch Drunk Love, or in Funny People, in which he seemed to be playing himself—a famous comedian who’s smug, vain and mean-spirited.

So I found Jack and Jill especially hellish, because it’s an Adam Sandler movie with two Adam Sandlers. He plays twins. Jack is a successful L.A. commercial director; Jill is his abrasive, incredibly annoying, impossibly homely failure of a sister who lives alone and desperate in the Bronx. Playing twins is a show-offy thing for an actor do. So is cross-dressing. Sandler is not convincing for a second at either. His idea of playing a woman is to shriek with a lisp.

I know, I know . . . it’s farce, not Masterpiece Theatre. But the formula is so moronic. And it all seems designed to serve Sandler’s I-am-smarter-than-the-movies-I-make mix of self-loathing and narcissism. Jack’s cutely contrived family are Norman Rockwell cut-outs right out of central casting, led by Katie Homes. Getting let out of the Tom Cruise cage to serve as Sandler’s bland helpmate is a mixed blessing indeed.

The comedy consists largely of physical gags that seem designed for the trailer, such as Jill tearing up Jack’s pool with a jet-ski. I almost walked out of the movie. No one was forcing me to watch it. But once I got my gag reflex under control, I found things actually picked up a bit, first with the bemused Johnny Depp cameo at the Lakers game, and then when Al Pacino comes aboard for what turns out to be a substantial supporting role.

Pacino plays himself in a hammy, scene-stealing performance. Al, you see, is inexplicably smitten with Jill, which is supposed to be a big joke, because she looks like a guy in unconvincing drag. Tootsie, she’s not. Jack, however, is keen to exploit Al’s lust, because he’s dying to cast him in a Dunkin’ Donuts commercial promoting a new Dunkaccino drink.

Dunkaccino? OK, that’s funny. But a little too close to the bone. It’s a fine line between Al doing a Dunkin’ Donuts commercial and Al doing an Adam Sandler movie. As much as we get a kick out of seeing Pacino pump some life into this moronic farce, the laughs come at a price. It’s like when De Niro started sending up his gangster thing. Or when Orson Welles became a pitchman for Paul Masson. It’s sad to watch a great actor cashing in his legend, doing sophomoric impressions of himself. On Saturday Night Live, no problem. That’s cool. But personally, I don’t want to see Pacino slumming, stealing scenes served up on an all-you-can-eat platter, as he parodies of all his trademark tropes and destroys whatever mystique he has left. I’d rather watch Adam Sandler play himself in a dramatic role as total jerk.