A virtuosic return to form by Jean-Marc Vallée, with a ferocious performance by Vanessa Paradis 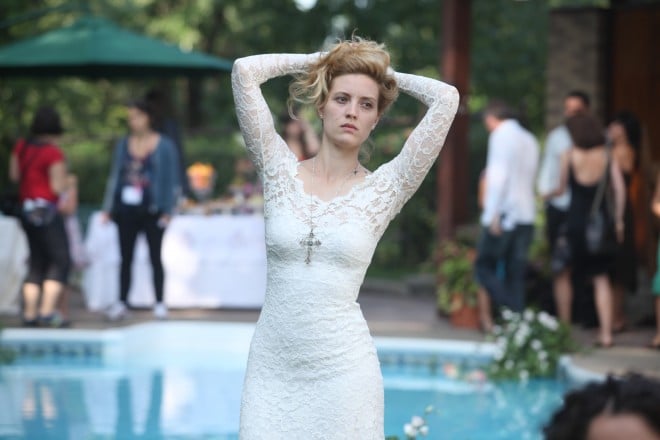 Of all the films I saw at TIFF in September none had a more electrifying impact on me than Café de Flore. The film’s ending, which I could not begin to divulge, hit me like a hammer to the chest. I walked out of the cinema physically transformed, still feeling goosebumps. As a critic, I’m wary of succumbing to that kind of extreme response during a festival. It’s like getting sucker-punched—the last time I was knocked for such a loop was at a TIFF screening of Black Swan, and I’ve been struggling to defend that film ever since. And while I “fell” for Café de Flore, I also felt I’d been drawn into something wild and outlandish, a metaphysical leap of faith. But when a movie hits you with a such a visceral punch, you have to go with your gut. I haven’t seen a more powerful Canadian film all year.

Café de Flore comes from Quebec writer-director Jean-Marc Vallée. After The Young Victoria (2009), his restrained fling with British royalty, Vallée re-embraces the French language, the musical euphoria, and the cinematic virtuosity that made C.R.A.Z.Y (2005) such an intoxicating triumph. It’s a daredevil drama of shattered love that dances a tightrope between two far-flung and seemingly unrelated storylines: a single mother (Vanessa Paradis) struggles to raise a Down Syndrome boy in 1969 Paris; a celebrated DJ (Kevin Parent) in present-day Montreal navigates a painful divorce while sharing custody of two resentful daughters. (For my interview with Paradis, a French chanteuse who has two children with Johnny Depp, go to: Vanessa Paradis on motherhood, Johnny Depp and Café de Flore).

It’s hard to talk about Café de Flore without discussing the 11th-hour hook that finally brings these two worlds into a shattering collision, but to do so would be criminal. For most of the movie, the tension between them remains purely mysterious. Paradis gives a ferocious performance as woman who pushes maternal devotion into dangerous overdrive as she fights to protect her handicapped son. In the Montreal story, Parent’s character is struggling with the consequences of leaving his wife and lifelong soul-mate (Hélène Florent), after falling in love with another woman (Evelyne Brochu). He wonders if it’s possible, or fair, for a man to have two soul-mates (his daughters certainly aren’t buying it).

The passion and energy of Vallée’s direction are extraordinary. And it marks a bold return to form after his strangely subdued Young Victoria, which the filmmaker now admits was a compromised movie-for-hire. “It was 2008, the economic crisis,” he told me in an interview last September, when the film premiered at TIFF. “There were decisions to make it more polished and do without things that could disturb, like original music and longer scenes. The Hollywood thing is get in late, get out early. You enter the scene as late as you can and get out of it as soon as you can. It gives it a fast pace. I prefer to get in early and get out late.” Like C.R.A.Z.Y., Café de Flore is fueled by music. The director explains that his script was triggered by a theme that was composed for the real-life Café de Flore in Paris.  When I discovered it in 2004, I couldn’t stop listening to it,” he says. “It made me want to make a film and come up with a story as epic and crazy and beautiful as this theme that was inspiring me. It’s as simple as that.” Like his Montreal protagonist, the filmmaker has two children, but he says the story is “totally invented.” Then he adds, “Of course, I went through a separation. I’d just gone through a divorce when I discovered this music. There’s a melancholy to it. But it’s not about my separation.  I wanted to believe in love, I guess. I wanted to write myself something that would make me feel good about what was new in my life.”

Repeatedly surging into the foreground of the film are three tracks from Pink Floyd’s Dark Side of the Moon. Vallée made Sympathy for the Devil a cornerstone of  C.R.A.Z.Y., but failed to buy the U.S. rights from the Stones because they were too pricey, which made an American distribution deal impossible. This time he made sure he had world rights to the Pink Floyd tracks. The movie’s other musical link is singer Vanessa Paradis, a superstar in the francophone world. As an actress, she displays a scary power.“I was concerned in the beginning with her beauty,” says Vallée. “She’s so sensual.” But like Charlize Theron in Monster, Paradis did her best to dull down her glamour. “She accepted no make-up and boring hair.”