What to watch for in Cannes

In an age when Hollywood has turned the movie biz into moneyball—an escalating numbers racket of sequels, franchises, reboots and spin—those of us who watch films for a living feel we’re caught in an endless loop, a Groundhog Day of déjà vu. As marketing and movie-making become indistinguishable, opening weekend is just another iteration of something we’ve seen before.

That’s why Cannes is a thrill. It’s a place of cinematic privilege where the usual rules don’t apply. Every year we make the pilgrimage to the French Riviera not knowing what to expect. Well, with one glaring exception. The festival’s May 15 opening night gala, The Great Gatsby, is by now old news. Weird. I’ve been coming to Cannes for 14 years, and it’s unheard of for the festival not to open with a world premiere. But almost a week after Gatsby’s North American debut, Warner Bros. will use Cannes for its European launch. One can only assume the festival was desperate to have the stars on its red carpet but didn’t have the clout to the force the studio to hold back its North American release. That’s an indication of how regimented global distribution has become. But it also doesn’t bode well for the regal status of the world’s most prestigious film festival.

On the other hand, opening night has always been largely ceremonial. More often than not, Cannes opens with Versailles-scale confections that turn out to be duds; and The Great Gatsby—which few critics have deemed good, never mind great— should at least serve as fodder for a lavish party. Besides, we don’t really come here to see Hollywood movies, but to get away from them. This, after all, is the Olympics of world cinema, and for those who like that sort of thing, nothing rivals the anticipation of watching the Cannes competition unfold from one day to the next. There tends to be refreshingly little advance hype about the films, so each time the lights go down it’s a journey into the dark on every level.

There are 20 features vying for the Palme D’Or this year. As we watch them, we’ll be second-guessing a heavyweight jury chaired by Steven Spielberg, whose eight cohorts includes Oscar-winning director Ang Lee (Life of Pi), and Oscar-winning actors Nicole Kidman and Christoph Waltz. Sadly, there are no Canadian features in the main competition. Apparently both Denis Villeneuve’s An Enemy, starring Jake Gyllenhaal, and Atom Egoyan’s The Devil’s Knot, featuring Reese Witherspoon, were rejected—especially baffling in the case of Egoyan, a longtime Cannes favourite who has even served on the jury.  There is, however, a Canadian first debut premiering in the sidebar program Un Certain Regard, Sarah préfère la course (Sarah Would Rather Run), directed by Quebec’s Chloé Robichaud. Its cast includes Micheline Lanctot, who co-starred with Richard Dreyfuss in 1974’s The Apprenticeship of Duddy Kravitz, which, coincidentally, will be shown in a gorgeously restored version as part of the Cannes Classics program.

Here are the dozen films I’m most looking forward to, all entries in the main competition except the final two:

1. Inside Llewyn Davis
Any Coen brothers movie is an event, even if you never know if it will be a major one or an idiosyncratic detour. Set in the ’60s folk scene of New York City, the film is loosely based on The Mayor of MacDougal Street, a memoir by singer Dave Van Ronk, whose influence on Bob Dylan was so seminal there have been allegations that Dylan plagiarized him. Oscar Isaac stars as fictional singer Llewyn Davis, with co-stars John Goodman, Justin Timberlake, Garrett Hedlund and Carey Mulligan. Marcus  Mumford of Mumford and Sons (and Mulligan’s husband) produces the soundtrack. 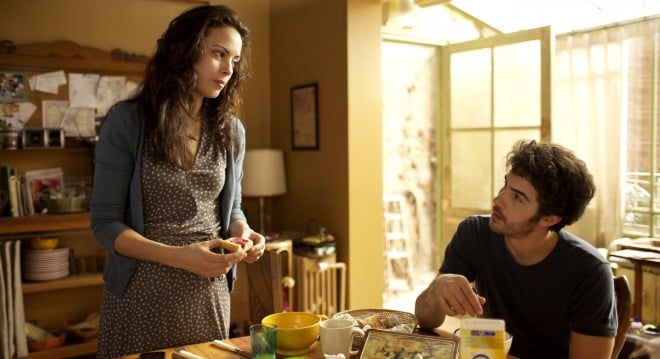 Bérénice Bejo and Tahar Ramin in 'The Past'

2. The Past
This French-Italian co-production comes from Asghar Farhadi, the Iranian writer-director of the Oscar-winning masterpiece A Separation. Once again, the premise is marital estrangement. The Artist’s Bérénice Bejo stars as a French woman who summons her Iranian husband (The Prophet’s Tahar Ramin) to visit her in Paris after a four-year separation. A domestic tango in Paris with these two actors and such a potent director sounds irresistible. 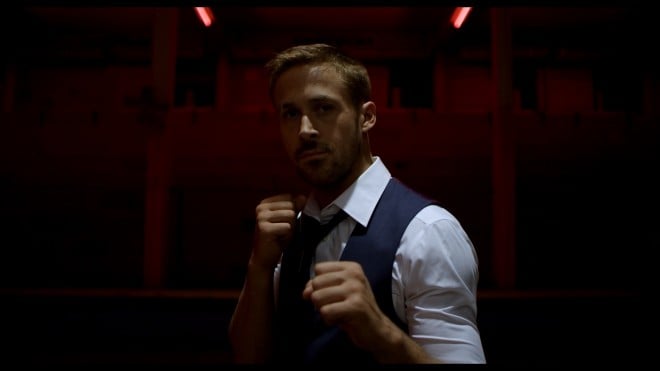 Ryan Gosling in 'Only God Forgives'

3. Only God Forgives
It’s a rematch between Danish director Nicholas Winding Refn and Ryan Gosling. After starring as a dead-cool tough guy in Refn’s Drive, the Canadian actor portrays a Muay Thai boxing club manager in this French-Danish copro, which was shot in Bangkok. With a style that seems to resemble Drive, this is the kind of unofficial sequel to an arthouse action movie that you have to go abroad to make. 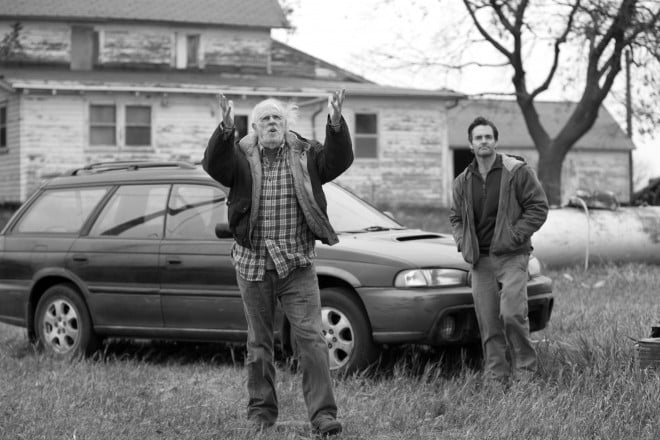 Bruce Dern (left) and Will Forte in 'Nebraska'

4. Nebraska
No one can accuse American writer-director Alexander Payne (The Descendants, Sideways) of selling out. With Nebraska, which is set in his home state, he dares to shoot in black-and-white, and to cast Bruce Dern (Coming Home), an aging actor Hollywood has long forgotten. Dern co-stars with Will Forte in the story of a father-son road trip that transpires when Dad sets out to Nebraska to claim a Publisher’s Clearing House prize. 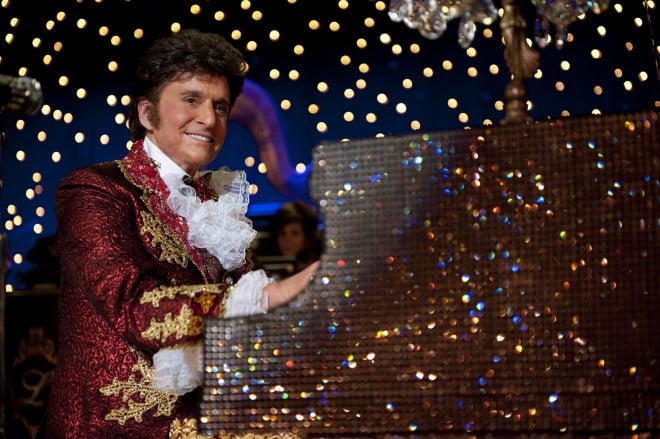 Michael Douglas in 'Behind the Candelabra'

5. Behind the Candelabra
Steven Soderbergh launched his career in Cannes in 1989 with sex, lies and videotape, a low-budget first feature that won the Palme D’Or and set a new template for American indie cinema. And now he delivers what he claims is his swan song as he retires from movie-making, while delivering blistering lectures on how Hollywood has abandoned art in favor of money. Michael Douglas stars as Liberace, America’s iconic piano queen, in a story that focuses on his love affair with Scott Thorson (Matt Damon). Soderberg couldn’t find a studio to distribute the movie, but HBO came to the rescue, and will air it May 26. 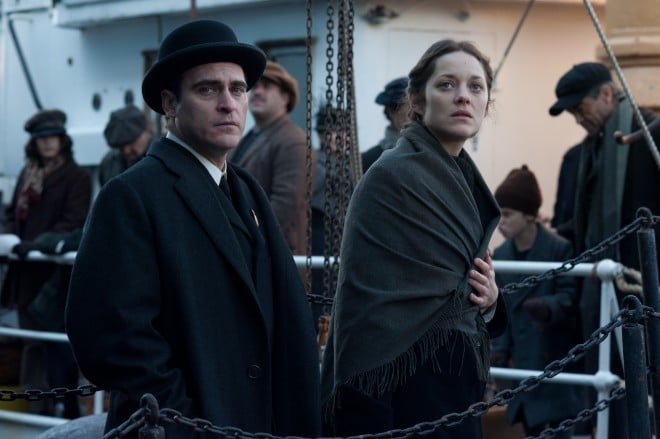 Joaquin Phoenix and Marion Cotillard in 'The Immigrant'

6. The Immigrant
Directed by American filmmaker James Gray (Little Odessa, The Yards), it’s the story of a Polish immigrant (Marion Cotillard) who comes to New York in the 1920s, falls into the hands of brutal pimp (Joaquin Phoenix) and seeks salvation with his cousin, a magician (Jeremy Renner). Gray’s simmering career has yet to explode, but with such a dynamite cast, this movie could be the one. 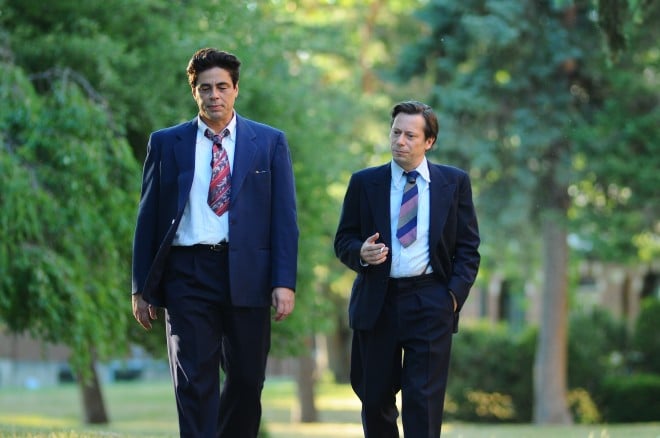 7. Jimmy P. (Psychotherapy of a Plains Indian)
With his fifth entry in a Cannes competition, French director Arnaud Desplechin (A Christmas Tale) looks like a contender with Benicio Del Toro starring as a Blackfoot veteran of the Second World War who’s struggling with metal illness—and Mathieu Amalric playing his psychoanalyst. The strength of the theme, plus a one-two punch from a couple of powerful actors, and a score by Canadian composer Howard Shore makes this sound like ideal Oscar-bait. 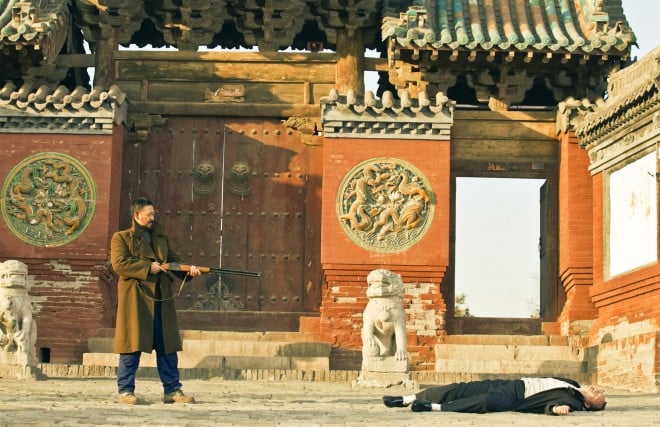 A scene from 'A Touch of Sin'

8. A Touch of Sin
China’s hottest director, Jia Zhangke (Still Life, 24 City) makes complex, contemplative tapestries of contemporary life in his country that have a sly, subversive touch. A Touch of Sin interweaves four stories to create portrait of “an economic giant being eroded by violence.” In the face of Chinese censorship, the Jia’s eloquent, independent voice takes on increasing importance. 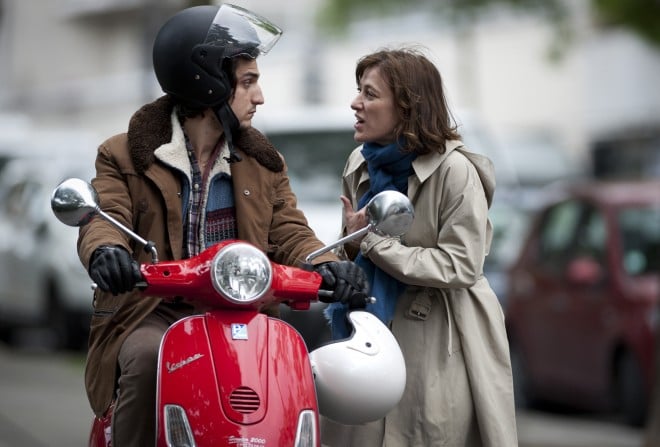 9. Un Château en Italie (A Castle in Italy)
This film by actor-director Valeria Bruni-Tedeschi, Carla Bruni’s older sister, is the only entry in competition by a female filmmaker. (Both Sofia Coppola and Claire Denis were shunted off to the sidebar program with the oh-so-patronizing title Un Certain Regard. And Bruni-Tedeschi’s competition status seems begrudging: her film, unlike the others, rates only one press screening, which is cruelly timed to conflict with the Behind the Candelabra press conference featuring Steven Soderbergh, Michael Douglas and Matt Damon. Bruni-Tedeschi’s acting career, which has included a role in Spielberg’s Munich, has garnered numerous awards. She’s less celebrated as a filmmaker, but here she directs herself in a romantic drama with her real-life partner, Louis Garrel (The Dreamers), so we might hope for some sparks to fly. 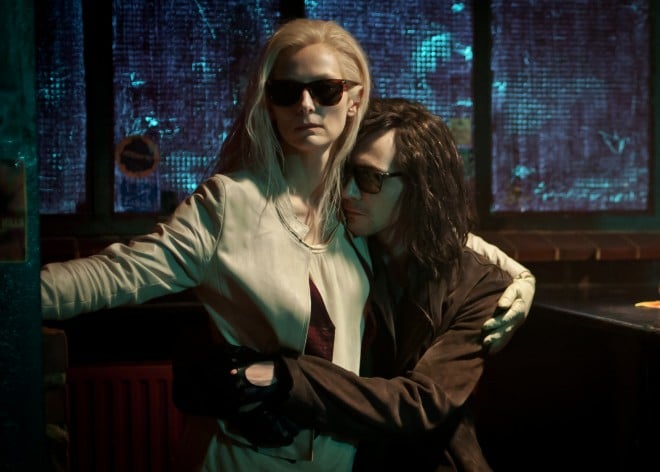 Tilda Swinton and Anton Yelchin in 'Only Lovers Left Alive'

10.  Only Lovers Left Alive
Though I’m a fan of Jim Jarmusch, he has been a bit off his game recently. Both Broken Flowers (2005) and The Limits of Control (2009) gave the impression he was beginning to suffocate in the closed universe of his signature style. But let’s hope he’s ready to break out of that self-imposed box, and this vampire romance might be just the ticket, especially with such a seductive cast—it includes Tilda Swinton, Mia Wasikowska, Anton Yelchin and John Hurt. 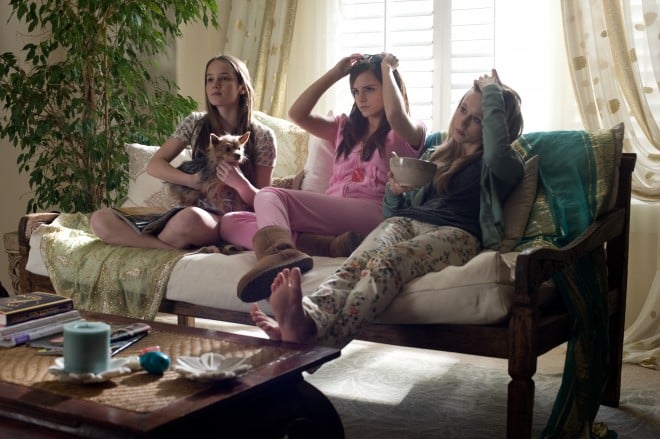 11. The Bling Ring
With only one female director in competition, it seems criminal that Sofia Coppola was not allowed into the boys’ club with her latest feature. Instead, she’s been given the blue-carpet honour of opening the Un Certain Regard sidebar. The Bling Ring certainly sounds tantalizing. Based on a true story documented in Vanity Fair, it’s about a gang of young burglars who use Google maps to track down and rob the houses of the famous, luminaries ranging from Nicole Hilton to Orlando Bloom. With a cast that includes Isabelle Broussard and Emily Watson, the movie is being sold with the slogan “Living the Dream, one heist at a time.” Sounds like a real-life Hollywood High version of Spring Breakers. 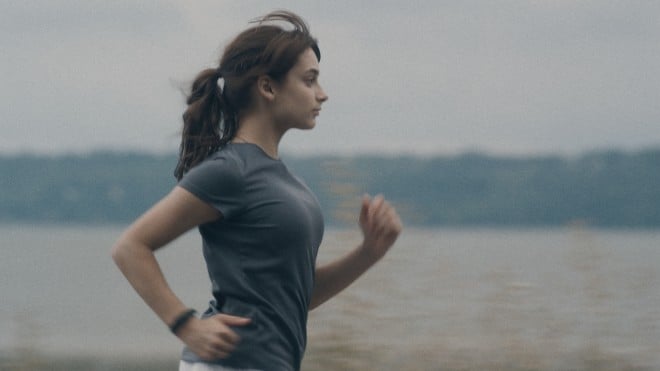 12. Sarah préfère la course (Sarah Would Rather Run)
It’s the story of a gifted middle-distance runner (Sophie Demarais) whose life changes when she’s gets an offer to join Quebec’s top university athletics program, but lacks the money or support she needs. As a first feature from an unknown director—25-year-old Chloé Robichaud—it’s hard to know what to expect. But Quebec has a knack for generating prodigious young talents, most obviously Xavier Dolan. And there’s no better place to launch a career on the world stage than Cannes. 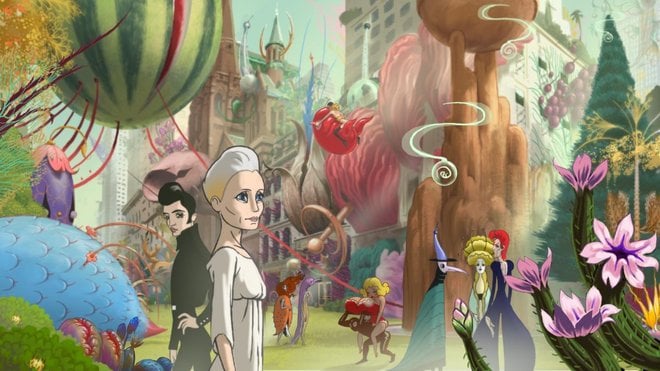 A scene from 'The Congress'

And, to make it a baker’s dozen, I’m tossing in a midnight addition to the list, which I compiled this morning. It’s easy to forget about the Directors’ Fortnight, because that parallel program of indie alternatives has been pretty dry in recent years. But there’s a lot of advance buzz around The Congress,  a partly animated, partly live action feature from Ari Folman, the Israeli director of Waltz With Bashir. It stars Robin Wright, playing herself as an actress who gets an offer from “Miramount” to be scanned. As the synopsis explains, this means “her alias can be freely exploited in all films the Hollywood major decides to produce, even the most downmarket ones, the ones she has turned down until now.”  The cast includes Harvey Keitel, Jon Hamm and Paul Giamatti. They had me at “Miramount.”

That’s not all. I’m also looking forward to new work from a number of solid auteurs, notably Roman Polanski, François Ozon and Claire Denis. Not to mention entries from less known filmmakers who could surprise us. We come here praying to be surprised. All in in all, this year’s program appears most promising.

If you’re looking for a comprehensive guide to all 20 features competing for the Palme D’Or, check out the superb work done by Toronto film critic Jake Howell (son of veteran Star critic Peter Howell) for Movie City News.