Why 'The Interview' is a satire very much of our time

Against long odds, 'The Interview' isn't an awful movie. But more than that, it also serves as a subtle kind of satire—if we let it 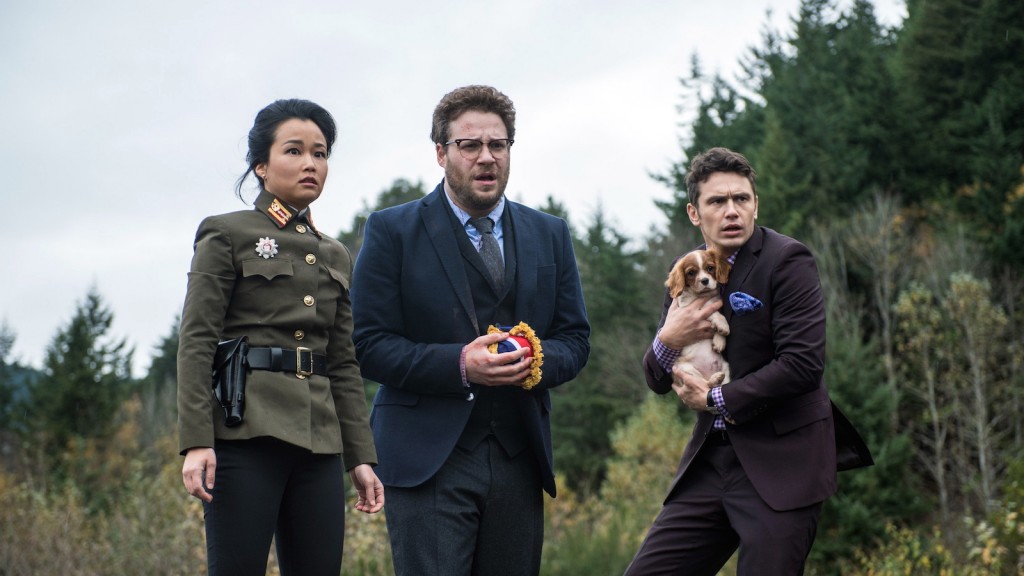 To read Paul Wells’s take on the film, click here.

To begin, here’s a cringe-worthy confession. For my Grade 12 politics class, I decided to make my final project a musical— North Korea: The Musical, I’m pretty sure I titled it. The plot: An American girl goes to North Korea and falls in love with a young Kim Jong Il, showing him the error of his father Kim Il Sung’s ways and ushering in a more peaceable country—essentially, it’s the already fairly problematic plot of The King and I, except with a slew of puns and the kind of awkward shoehorning of information and statistics to qualify it as a final project in a Grade 12 politics class. It came with real melodies and actual songs; standout titles included the linchpin track I’m Feeling Kim Jong Ill, as well as The Political Dance, a sassy merengue that featured Kim and my fictional American protagonist doing a tango that writ physical the abstract notion of international diplomacy.

It was bad, obviously. I haven’t thought about it in the intervening years, other than to bring it up for a chuckle. And so it goes—life went on.

No such luck, though, for the makers of The Interview, the once-nixed movie, as a result of potential terrorist attacks on theatres that showed it, released on streaming services on Christmas Eve. In a better world, The Interview should’ve been launched in theatres, tittered at by the same high school crowd at which I targeted my own musical, and then consigned comfortably to drug-store bargain bins and the dustier crannies of Netflix.

But we’re not going to let it be merely bad and forgotten – really, we no longer can. We can’t talk about The Interview without talking about what Sony did, about the freedom-of-speech enthusiasts lining up to see it as a political move, or about those among us who would snarkily laugh at them for their ardour.

We should know that that’s not the movie’s fault. Let’s remember that the legacy of Vladimir Nabokov’s Lolita is, really, as much about its storytelling as it is about the furor it generated; let’s not forget that The Satanic Verses, the book that launched a fatwa against its author, isn’t close to Salman Rushdie’s best work.

So let’s do what we’re going to have to do, which is read into it. If anything, that’s to its benefit: it’s actually a decent movie, but it has some serious filmic problems. Let me get them out of the way here by quickly naming them: a rushed, inexplicable, surprisingly joyless first 20 minutes; a promising premise that’s eventually forgotten; some needlessly discomfiting racial quips; female characters that don’t so much fail the Bechdel test as they don’t even show up with the right kind of HB pencil. And, of course, it doesn’t meaningfully reveal the real atrocities being committed in North Korea.

But then, the movie also never promised to throw real light on those crimes, and many of those same criticisms can be levied at other Rogen/Franco vehicles. Criticizing them more in The Interview simply because of its raised profile is unfair—but if people will, anyway, let’s at least give The Interview the benefit of ascribing it artful characteristics. Under the right light, The Interview is an essentially modern satire, such as it is—and a halfway decent one, at that.

The film couldn’t help but remind me of an article I wrote in the summer, when it was revealed that Facebook was toying with the idea of creating a “satire tag” so that the social network could protect its users from the public humiliation of being lured in by stories from the likes of The Onion. At the time, I interviewed Gerald Lynch, a professor of English at the University of Ottawa who researches humour and satire in Canadian literature, and he talked about Henri Bergson’s 1901 book, Laughter. “He argues that the function of such prime producers of laughter as satire is social,” said Lynch: “To laugh to scorn extremes of behaviour, and so to pull such behaviours back toward the centre, the norm, so that in Bergson’s view satire ultimately serves a normalizing function.”

That’s just what The Interview is doing: normalizing the extremes of Kim Jong Un. The joke, after all, is that Kim Jong Un is in this movie at all. This joke is buried in the movie’s opening scene, when North Korea isn’t the mostly annoying flea it is in real life, but rather a country with genuine nuclear capability. The joke is that Kim, after a series of long-play setups about the fact that he doesn’t need to urinate or defecate because he lacks an anus, angrily shoots someone in their rear and squeals, “Your butthole is ironic.”

The joke is that a real-life dictator is squealing about buttholes.

Butt jokes, after all, are core elements of what constitute mainstream North American comedy, if box offices are to be believed. So by pulling Kim back to the norm, these jokes makes him something we can fathom, something we can laugh at, something we can disabuse. It may not be in the form we expect it, and it may be essentially inelegant, but it’s what we’ve got.

Many have compared The Interview, often sneeringly, to Charlie Chaplin’s The Great Dictator, a movie unafraid of skewering Adolf Hitler (as the thinly disgused Adenoid Hynkel) at the peak of his powers. But that classic actually does much of the same thing as The Interview—it normalizes a monster. There is a balletic scene about halfway through the film where Chaplin (as Hynkel) cradles a balloon of the globe as he prances about, letting it float and then fall, occasionally bouncing it upon his raised bottom. The joke, though subtler, is effectively the same: normalizing him, making him one of us by unleashing the same absurd mockery. In that moment, Hynkel/Hitler is more vaudevillian than villain.

Chances are when Rogen, Franco and co-director Evan Goldberg set out on this film that they did not mean to deliver a searing treatise on the absurdity of villainy, only use it as a springboard for butt jokes. But inadvertently, this movie has become culturally significant not just because it inspired the Sony hacks, or even because, despite this meek retroactive move to stream it, those hacks caused America to kneel. This movie became significant because it ends up working as a subtle-by-way-of-being-uncouth satire of Kim before his actions became even more extreme, (allegedly) putting the kibosh on the film with terrorist threats.

It also, in a way, becomes a document of a different time. The power of its satire is the gleeful high ground upon which it stands, so as to normalize Kim’s extreme. But the confidence needed for a film to gleefully submit a real world leader to puerile jokes and a brutal killing—this essentially modern kind of satire—is that of a world that wouldn’t have, even for a second, considered pulling it from theatres.

FILED UNDER: The Interview