Why the Oscars mix-up was the Academy's worst-case scenario

It’s only right that a night devoted to celebrating a highly manicured kind of movie magic was lost in an act of live TV mayhem. The lyrical black gay American coming-of-age flick Moonlight won the Oscar for best picture, which would have been a shock on its own—defeating frontrunning musical La La Land—if it didn’t come before the most epic gaffe in Oscars history, the night’s top prize being handed to that very frontrunner for a few confusing minutes before the record could be corrected, dramatically shattering those hearts on stage. But it was more than just a mere mistake: It was an excruciating nightmare scenario that even the finest Oscar-winning screenwriters couldn’t have penned for a much-assailed award show. On a night when the Academy actually got it right, one irrevocable Chekhov’s-gun envelope put two films—including one freighted with every cultural signifier of note in 2017—in horrible positions, and cast into doubt what the Oscars are even supposed to mean anymore.

Let’s start with how we got here. The reporting will surely come out in due time, but the footage itself tells a story: Warren Beatty and Faye Dunaway, the stars of Bonnie and Clyde, took the stage to announce the Best Picture winner, but appear to have been given the envelope for the Best Actress award, which had just gone to La La Land‘s Emma Stone. (A story on the Huffington Post, amazingly up two days before the awards, explains the failsafe measures that did not appear to go off; a separate Oscars explainer at the L.A. Times reports that the two PricewaterhouseCoopers accountants in charge of the cards each have one envelope per category, which explains why Emma Stone and Beatty wound up clutching two of the same cards.)

Beatty then opened the envelope, and started shaking and stuttering, clearly having trouble with both the card and its text. This was the first sign something was amiss—even though he is 79, he remains an unflappable figure. But on such a massive stage, when you are cast under a spotlight and expected to simply read what is on the card, it is a testament to Beatty that he paused, hoping for someone to come to his aid in an impossible situation. When he showed it to Dunaway, quietly muttering “Emma Stone” to her in confusion, she wound up grabbing it and reading the card instead, and she too was blameless; in a moment where she felt her former film partner was succumbing to the moment, and you are impatient during that long moment, it is fair that you would want to grab the card and quickly scan for the name of the movie. The fact that it was a card for an actress from La La Land put the pair in an exquisitely intractable position.

There would be no salvation for them, as social media has already begun to skewer them unfairly. By the time the words were said, La La Land‘s cast and crew had stormed the stage—as one does.

In a way, it feels deserved that this happened to the Academy. The Oscars have long (but not always) treated the night with a gloved-hand reverence, a night of telling itself the story it wants to tell about the importance of the movies. It’s not always the right story, and often, those stories are historical redresses for mistakes of years past. After all, each year, predictions for best actor/actress categories are based as much on talent as whether or not they had already won, or whether the Oscars felt it was “their turn.” Cinema’s biggest night is an evening of storytelling about itself, and that story is often a self-important, smug one that believes that societal change, as host Jimmy Kimmel said in his night-gone-awry, must “start with us,” as if celebrity inherently means moral leadership, and every Oscar-winning movie from Mrs. Miniver to The Lord of the Rings: The Return of the King sparked a revolution.

Donald Trump’s presidency has been a call to arms (or at least passive-aggressive shade) for the Hollywood set—look no further than the standing ovation for Meryl Streep, ostensibly for her 20 career Oscar nominations but more likely for her public spat with the President. So all night, we saw it. The Salesperson’s victory was something of a surprise in the face of clear frontrunner Toni Erdmann, but it felt fated when its director boycotted the show over Trump’s ban. White Helmets took the best documentary short category and the fact that its Syrian cinematographer Khaled Khatib was barred from entering the country surely did not hurt its chances. And for one glorious moment, with the victory of a movie about a gay black American—a beautiful film made even more appealing to the Academy for its one-stop identity shop—the Oscars had an opportunity to erase the moments that Crash beat Brokeback Mountain, and try to slide a lid over the gasoline fire of #OscarsSoWhite accusations.

Now, with one gaffe, the Oscars instead slung a bucket of water on the gas fire. What should have been a capping moment on its careful narrative wound up being knee-capping; the cherry on top of the frilly cake it was trying to build itself wound up being rotten and poisonous. The Oscars got hoisted on its own petard—through no real fault of the Academy itself. 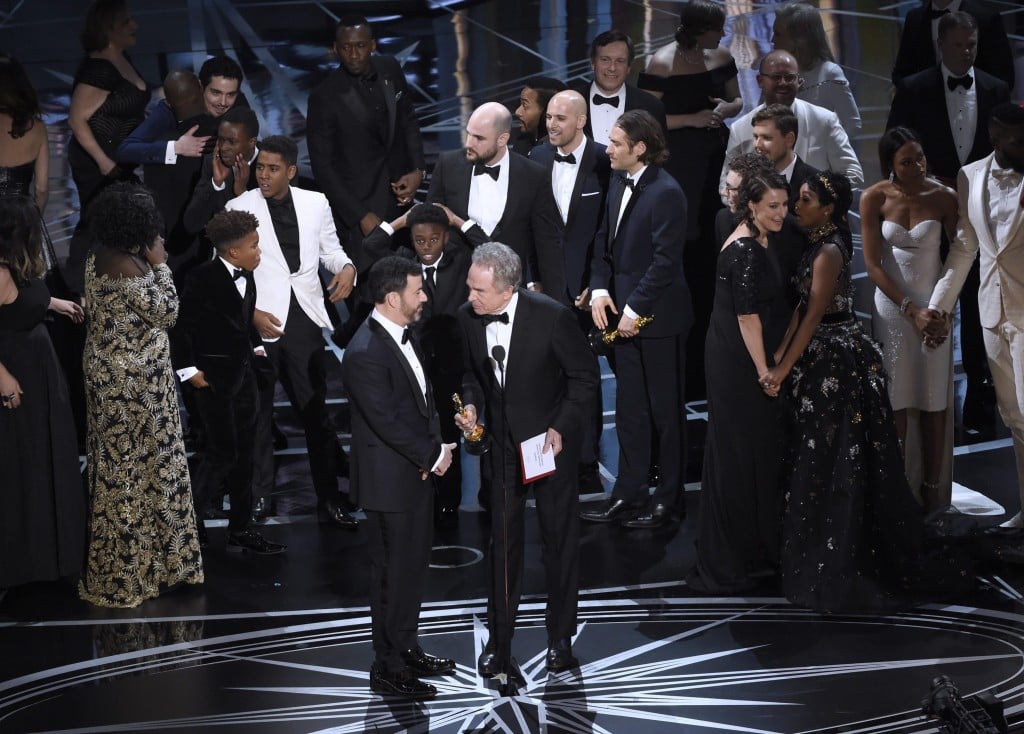 Host Jimmy Kimmel, left, and presenter Warren Beatty discuss the results of best picture as the casts of “La La Land” and “Moonlight,” winner of best picture, react on stage at the Oscars on Sunday, Feb. 26, 2017, at the Dolby Theatre in Los Angeles. (Photo by Chris Pizzello/Invision/AP)

More troubling is how it’s exposed a real, more existential problem. “It’s just an award show,” Kimmel said in a game effort to try to douse the many four-alarm blazes when La La Land and Moonlight‘s crew met, in the ecstasy of highly viewed confusion, on stage. He was wrong and right, and the Oscars are now an impossible situation in between. We have to either believe in the Oscars’ message of self-importance, that there is power in cinema to change society, and therefore read deeply into the meaning of the mistake, or we dismiss this gaffe—and the awards—as being unimportant. We either believe in the Oscars’ claim that representation matters and thus harp on what it means that Moonlight‘s big moment was, or we say the Oscars are just an award show. Either the Oscars are a celebration of self-serious art, or we chalk this up to innocent frivolity. Both are convincing ways forward, but we can’t have it both ways.

So now, the Oscars and Moonlight’s well-earned victory will no longer be a narrative of merits, but instead one of optics and politics. This was the world we wanted, an acknowledgement that the political is everywhere. And that is still true. But it’s no longer mere acknowledgement; it’s become an absorbing obsession. We saw it at the Super Bowl, an orgy of concussions and capitalism that became an indictment of the presidency; we saw it at every step of this year’s movie awards season; we saw it in Adele’s Grammy win over Beyonce; we saw it in the glee some took in La La Land’s unfathomably cruel heartbreak. (Indeed, we should remember that representation goes beyond actors and stories; the Oscars are a reminder that making a movie is a huge undertaking involving the work of massive teams, with cast, crew and tech striving to put something bigger than themselves together. We don’t know how diverse all teams were, but it’s another reason we shouldn’t revel in La La Land’s unique pain.) And there will be people who will feel like Moonlight’s win wasn’t earned, that there is an asterisk on what should have been a purely joyous moment in part because of the politics imbued in it that now threaten to consume it.

On this note, perhaps this nightmare was actually the second-worst possible situation; imagine if Moonlight’s name was wrongly read, and La La Land had won instead. But the horror of that potentiality only proves that, amid Trump’s presidency and the thoughtful debate over identities, the political isn’t just personal, and it is no longer just one way we interpret art—it’s become nearly everything. With this year’s award season now over, it might be useful to take a step back and assess if that’s the single frame through which we want to perceive art.

Yes, Moonlight deserved the win. But La La Land—and Moonlight—didn’t deserve any of this. And, inadvertently exposed and riven, the Oscars—the clothes-less emperor—can really only blame themselves.