The 30-year-old Québécois director has made eight films in 10 years. He may have outgrown the 'wunderkind' label, but he's got plenty of time to reboot his career. 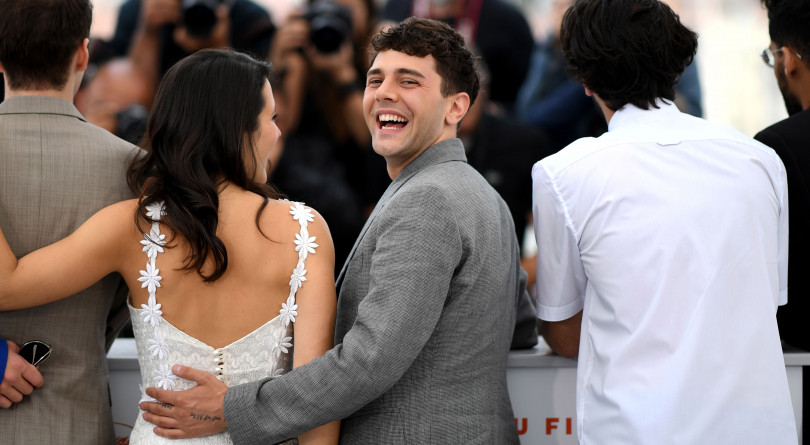 Dolan at the Cannes Film Festival on May 23, 2019. (Loic Venance/AFP/Getty Images)

Xavier Dolan was in tears and the crowd would not stop clapping. The occasion was the Cannes premiere of his eighth movie, Matthias & Maxime, and as the applause rained down for eight minutes, he kept wiping his eyes and hugging his actors, re-baptized in the place where it all started.

This was Dolan’s sixth Cannes premiere, but for this preternaturally talented Quebec filmmaker, who just turned 30, the experience never gets old. “I always cry,” he happily told me the next day. “Making a film, for me, is entirely about emotions. If there’s no emotion, there’s no point. I was crying because I’m surrounded by people I love most. For me, it’s a coherent way of living.”

If Dolan weeps easily, bear in mind that he’s not just a director but an actor, who’s been in the business from the age of four. He’s been a star since he was a child and he’s even more famous in France than in Quebec. There were far bigger names in Cannes. The afternoon of his premiere, I was squeezed like grilled fromage in a crush of journalists waiting to meet Brad Pitt and Leonardo DiCaprio. But they’re from another planet, Hollywood space gods. Cannes loves movie stars but reserves a special place in heaven for the filmmakers it has cultivated. And the French have embraced Dolan as a favourite son, a crown prince who stays forever young in a magic kingdom ruled by aging auteurs.

He made his debut a decade ago in Cannes as the 20-year-old phenomenon who wrote, directed, edited and starred in I Killed My Mother. Since then, the love affair has only grown. Stars have rushed to work with him, especially women, from Marion Cotillard to Adele, who had him direct the video for her hit song Hello. And with each ascent of the red staircase in Cannes, Dolan rose to another level at the high altar of world cinema, falling just short of the Palme d’Or in 2016, when he sobbed his way through a speech on receiving the runner-up Grand Jury Prize for It’s Only the End of the World. What made the award so cathartic and redemptive was that after its premiere, Dolan had been devastated by the film’s scathing reviews.

Since then, unlike fellow Quebec directors Denis Villeneuve and Jean-Marc Vallée, he has been unable make the leap to Hollywood. For his 2018 English-language debut, The Death and Life of John F. Donovan, he recruited three Oscar-winning actresses—Susan Sarandon, Natalie Portman and Kathy Bates—and left Jessica Chastain on the cutting room floor. But the movie’s belated premiere at the 2018 Toronto International Film Festival, after a year of re-editing, was a disaster. The movie has yet to be released outside of France.

With Matthias & Maxime, Dolan has retreated to his home turf and made a modest film with his buddies, an array of Quebec actors that includes local TV stars with no marquee value outside the province. The story revolves around two best friends who freak out about their sexual preferences after they’re asked to share a kiss in a student’s short film. Despite the enthusiasm at its premiere, the film received mixed reviews; even the admiring critics were restrained, unsure if they were looking at a return to form or evidence of a new maturity. And after six Cannes premieres, for the first time Dolan went home without a prize.

A star-is-born fable can last only so long. Dolan, once notorious for his impetuosity and petulance, is finally too old to be called a wunderkind. His meteoric career was perhaps due for a correction. But whether M & M is viewed as a modest comeback or a setback, what Dolan has already achieved is unprecedented. No director of note has made eight feature films before turning 30. And the breadth of his talent is ridiculous. It’s not enough that he writes, directs, produces, edits and acts in his films, but he also designs the costumes—not to mention the dapper grey suit that he was wearing when he arrived for an interview at a beachfront lounge in Cannes.

He didn’t come alone. Dolan insisted on bringing along his posse of young Quebec actors, a rambunctious troupe of five men and one woman who would erupt in laughter as they talked over each in rapid-fire volleys of repartee, much like they do in the movie. It was like interviewing a rock band. Dolan gamely behaved like one of the boys, even though they were all bigger, louder and less boyish, but he was clearly the star and looked the part, a diminutive Adonis with high cheekbones, a knowing smile and charm to burn.

His actors knew he was famous in France but had no idea how famous until they saw him on the red carpet. “It’s one thing to hear people yelling ‘Leonardo,’ ” said one. “But when it’s a friend and everyone’s screaming ‘Xavier, Xavier!’—it’s amazing to see so much admiration on the other side of the world.”

Dolan has spent much of his life in a showbiz bubble. The son of schoolteacher Geneviève Dolan and Egypt-born actor/singer Manuel Tadros, he began acting on TV at four, landed his first movie role at eight, and left school to devote himself to acting, while dubbing French dialogue for TV shows and films from South Park to Harry Potter. Writing the script for his first feature at 17, he invested $150,000 of his savings in a three-year struggle to make I Killed My Mother, the semi-autobiographical portrait of a precocious artist feuding with his single mom. It was the film that ignited his career.

Since then he hasn’t stopped. At 25, as the youngest competitor in Cannes with his intense domestic drama Mommy, he shared the Jury Prize with the oldest, Jean-Luc Godard. Now, after It’s Only the End of the World and The Death and Life of John F. Donovan, two star-studded projects that stalled his career, Dolan has reverted to a more personal kind of filmmaking with Mathias & Maxime, and to the themes of sexual identity and generational friction that define his earlier work. 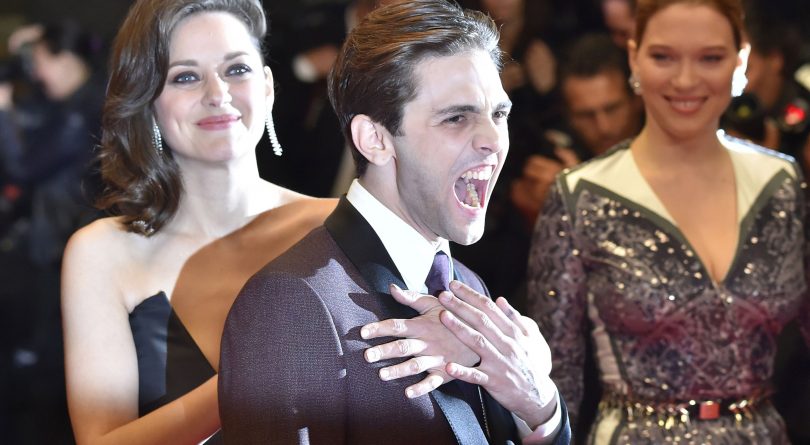 Cotillard, Dolan and French actress Lea Seydoux at the screening of the film “It’s Only The End Of The World” at the Cannes Film Festival in 2016 (Loic Venance/AFP/Getty Images)

Dolan is openly gay and has often been ahead of the curve with exploring gender fluidity. But he rejects being labelled a gay director. “A lot of people say, ‘I recognize your themes, mothers and homosexuals,’ ” he said at his press conference. “But mothers, we all have one or had one. They’re not mothers, they’re women.” As for his movie’s sexual orientation, he adds, “This film is not gay. We never talk about heterosexual films. ‘Oh, I saw this great heterosexual love story. It’s between a man and a woman—it’s a little weird, but after 15 minutes you get used to it.’ ” Meanwhile, he’s amazed at how a new cohort is dissolving boundaries. “The fluidity with which this younger generation approaches sexuality, gender, their identity—is new to us.”

One reason Xavier Dolan is a star is his mix of charisma and eloquence. In Cannes, he even played film critic, posting a rapturous love letter on Instagram to another director in competition (something I’ve never seen here in 23 years). Hailing Céline Sciamma’s Portrait of a Lady on Fire as “magnificent,” he marvelled at “the relief and the intimacy I felt throughout the film watching women, just women, for two hours of my life.”

I don’t know how Dolan felt about being shut out of the awards, but I’d be surprised if he’d take it to heart the way he once might have done. He’s also excited to do more acting. M & M is the first of his movies that he’s acted in since Tom at the Farm in 2013. He kept his cast in the creative loop right from the start, so it feels like a movie written for actors, by an actor. After the premise came to him when he was with his friends at a cottage, he wrote the first 40 pages of the script while in Atlanta playing the role of a gay man undergoing conversion therapy in the movie Boy Erased (2018).

Lacking the director’s usual stylistic flourishes, M & M races along like a raw, unplugged jam by a gang of hard-partying bros. But amid the convivial din, the relationship between the pivotal characters is so repressed that they spend most of the film avoiding each other. In fact, the most intense moments erupt when the story detours into a couple of kitchen-sink battles between Maxime and his alcoholic mom (Anne Dorval, a veteran of domestic title fights in I Killed My Mother and Mommy). Dolan says he saw the film as a transition to a more “restrained” kind of filmmaking. “I don’t want to spend my whole life filming people who fight in the kitchen,” he added, only half-joking.

With maturity, Dolan seems to have discovered the art of self-deprecation, even if it’s mixed with self-absorption, as in his preface to the film’s press notes: “I have, either out of love or trying to remedy a relentless imposter phenomenon, made a fool out of myself more often than not. Success comes with isolation.” He was clearly chuffed to be in Cannes again, hosting his crew. “I had an enormous amount of solitude during my early 20s,” he said. “I never had a group of friends before.”

Now, after making eight movies in 10 years, Dolan says he wants to slow down and devote more time to acting. He’s had a lot of offers lately, including a part in a French film as “a very pretentious auteur.” Glancing at his crew, he pre-empts the inevitable quip: “I started my research right away trying to figure out how to play that.”

Meanwhile, he says he’s dying to make genre movies—“a horror film, a suspense film . . . a magic film?” More guffaws from the boys—“You call that cutting back?” But if Dolan wants to reboot his career, maybe he should stop with all the intense dialogue and make a movie about undead mothers. Most of the films making waves in Cannes—from Quentin Tarantino’s Once Upon a Time in Hollywood to South Korea’s Palme d’Or winner Parasite—revelled in genre, as if bent on turning the art house into a house of horrors. For Xavier Dolan, coming of age in the Cannes casino has had its share of ups and downs. But with most of his life ahead of him, he still has plenty of time to get out of the art house, shed some tears and set the world on fire once again.