The Oscars: 'The Shape of Water' isn't the best movie, but it will win 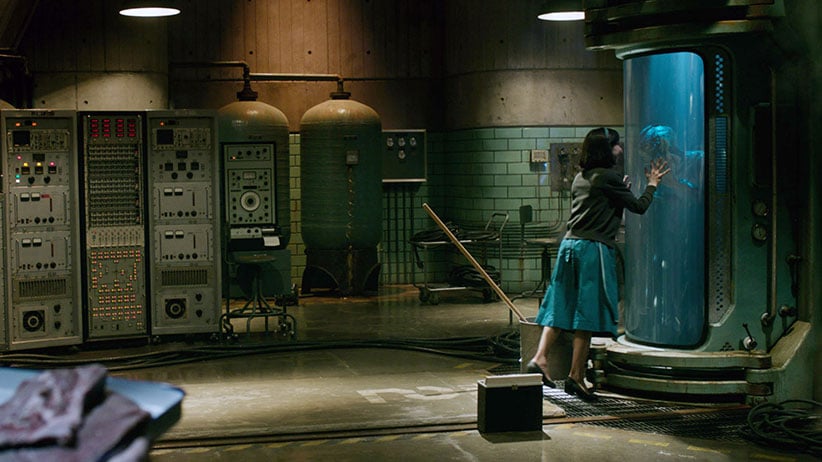 In his fight to make America, well, American again, Donald Trump may want Hollywood to build a wall. This may be, after all, the year America lost the Oscars.

The Shape of Water, an interspecies romance shot in Ontario by a Mexican filmmaker who lives in Toronto, tops the list of Oscar contenders announced this week, with 13 nominations. That’s five more than its closest rival, Dunkirk, a movie about Britain saving the free world from Nazis before the United States got its feet wet. Right behind it, with seven nominations, is Three Billboards Outside Ebbing, Missouri, a movie written and directed by a Brit that presents an acidic portrait of racist policing and sexual assault in a sleepy Southern town.

Only four of this year’s nine Best Picture nominees came from American directors. And aside from Dunkirk, there’s not a studio blockbuster among them; the year’s most costly pictures, Blade Runner: 2049 and Star Wars: The Last Jedi, were recognized only in music and craft categories. As for the others, they include two breakout debuts by writer-directors: Get Out, an eviscerating satire of white liberalism by African-American Jordan Peele, and Lady Bird, a coming-of-age comedy from Greta Gerwig, who becomes only the fifth woman in the Academy’s 90-year history nominated for Best Director.

Rounding out the Best Picture list is a cosmopolitan parade of movies that offer bracing antidotes to Trumpland—The Darkest Hour‘s portrait of Winston Churchill, a political leader who turned the tide of history with complete sentences; Call Me By Your Name, a rhapsodic gay romance from Italian director Luca Guadagnino; Phantom Thread, the subtle yarn of a English fashion designer waylaid by the woman he objectifies; and The Post, Steven Spielberg’s clarion call for freedom of the press in America.

How will the race shake out? Well, I’ve seen all nine Best Picture nominees, so while you spend the time between now and Mar. 4 catching up on what you’ve missed, here are capsule reviews of each nominee, ranked by their likelihood of winning.

The Shape of Water

While themes of identity politics and intolerance are strewn throughout the field, this is the one movie where such issues rise to the surface innocuously—and wrapped in a gorgeous showbiz fable that seems engineered to seduce the Academy. Set in 1962 Baltimore, it’s the story of Elisa (Sally Hawkins), a mute janitor who falls for a humanoid creature from a South American river imprisoned in a high-security government lab. With the help of her spunky African-American co-worker (Octavia Spencer) and her closeted gay neighbour (Richard Jenkins), she tries to save the gentle monster from an evil colonel who wants it vivisected (Michael Shannon). Guillermo Del Toro’s 10th feature is as schematic as it sounds, but what elevates the film from its script and genre is the soaring poetry of its design: it’s a thing of beauty.

Originally inspired by Creature from the Black Lagoon (1954), it culminates Guillermo Del Toro’s lifelong dream to make a movie about a romance with an amphibian creature. With every shot, The Shape of Water is shaped as a passionate ode to cinema—the heroine lives above a vintage movie theatre—and Hollywood likes nothing than better to see its own mythos reflected onscreen. Eleven years after Pan’s Labyrinth—a less genteel horror film from Del Toro—won three Oscars in technical categories, Del Toro seems poised for an artistic triumph. Of the Best Picture nominees, The Shape of Water is not my favourite nominee, but it’s the one I’d bet on—even though I predict it won’t win a single acting award.

READ MORE: The problem with The Shape Of Water and ‘woke cinema’

My favourite. It, too, is laced with melodrama, and unfolds in a contrived, heightened reality. But unlike Shape of Water, Martin McDonagh’s dark comedy surprised me at every turn. Frances McDormand, who seems destined to win Best Actress, burns up the screen as Mildred Hayes, a woman who goes to war against a small-town police department on manic mission to avenge the rape and murder of her daughter. She’s the kind of heroine we love for being so unlikeable. But she’s almost upstaged by Sam Rockwell, who dances a high-wire character arc as a racist cop stumbling toward redemption. Tight-wound with McDonagh’s barbed-wire script, Three Billboards lights up hot-button issues with an incendiary glee. But it has also generated a backlash: A movie about race in America cooked up by a Brit and ruled by white characters who play with the n-word is just asking for trouble. But count on this: McDormand, a Hollywood outsider shuffling through the awards season—resisting glamour with gruff charm worthy of her renegade character—is due for her Oscar moment.

Amid a slate of nominated pictures driven by strong performers and idiosyncratic characters, this is Hollywood’s one opportunity to honour breathtaking spectacle and old-fashioned heroics. Sure, The Shape of Water stands out as a visually stunning homage to cinema, but it’s framed on an intimate, almost cosy scale. Christopher Nolan’s Dunkirk is more on the scale of Lawrence of Arabia, a vast mobilization of manpower and machinery that arrived as a miraculous anachronism in an era of CGI shortcuts. One of the reasons it may have a shot at Best Picture is that, outside of the technical categories, it doesn’t have a shot at much else, except Best Director. But it’s a picture with more steel than soul. Despite a sterling performance from Mark Rylance as the captain of a pleasure craft sailing to rescue British troops, it was shut out of the acting categories—an indication that the most heroic thing about Dunkirk is its epic re-staging of a massive military evacuation, a feat no actor could hope to compete with.

Occasionally Oscar will pull a small, unassuming gem out of the fray, and defy the odds by awarding it Best Picture. That happened last year with Barry Jenkins’s Moonlight, the low-budget first feature that ultimately knocked La La Land off the podium after an envelope mix-up. Lady Bird is one of two first features (the other being Get Out) sitting in that dark-horse spot this year. Unlike Moonlight, another coming-of-age story, it doesn’t venture into unexplored social or sexual terrain, and its style seems conventional. There’s nothing earth-shattering about it. But Lady Bird wins us over by capturing what’s ordinary and familiar with a disarming wit. It seems almost universally beloved, for the smart energy of Gerwig’s direction and script, and the seamless interplay of its two Oscar-nominated performances—by Saoirse Ronan as an impossible teenager carving out her freedom, and Laurie Metcalf as her equally impossible mother. 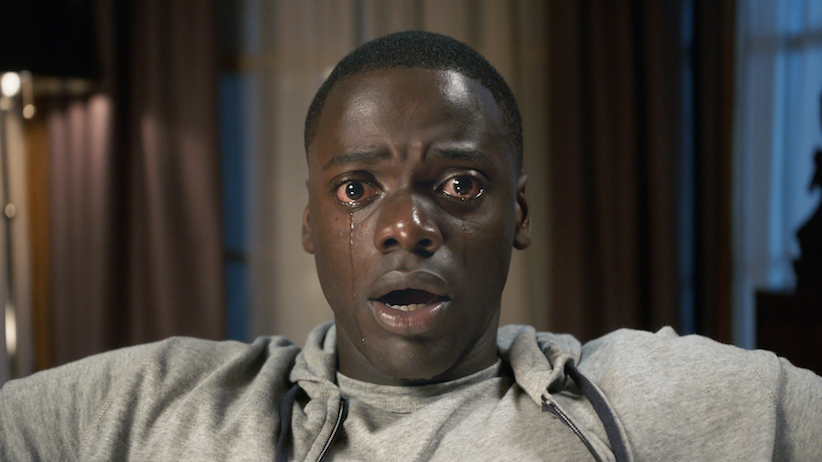 Daniel Kaluuya as Chris Washington in Universal Pictures’ “Get Out,” a speculative thriller from Blumhouse (producers of “The Visit,” “Insidious” series and “The Gift”) and the mind of Jordan Peele. (Universal)

Was there a more shocking and provocative film this year? The social satire of Three Billboards has more symphonic breadth, both in its story and performances. But Get Out is the film that jumped out of nowhere and delivered a knockout punch. Unlike Three Billboards, it never allowed us to feel comfortable for a second. Unlike The Shape of Water, it’s an actual horror film. And though it premiered early in the year, outside the privileged awards pack, it remains acutely memorable. With deft allusions to Rosemary’s Baby, writer-director Jordan Peele recasts white liberal America as an insidious, soul-sucking, contemporary plantation. And as the story’s mortified hero/victim, Daniel Kaluuya is so quietly convincing that his performance becomes almost invisible. So don’t expect him to win Best Actor. That honour will fall to one of the next two contenders.

For some reason this year, the zeitgeist saw fit to give us two Dunkirk movies by two English directors. Nolan’s spectacle is the one that takes place outdoors, in the clouds of war; The Darkest Hour takes place almost entirely indoors, backstage in the cigar-clouded corridors of power. After watching John Lithgow’s quite satisfying portrayal of Winston Churchill in The Queen, it’s a revelation to see Gary Oldman give such added nuance and dimension to the character in Joe Wright’s intensely verbal drama. Almost everything about this movie is overwrought, with exception of Oldman’s Shakespearean performance. After winning both the Golden Globes and the Screen Actors Guild awards, expect him to be anointed Best Actor—the only award this film will win.

MORE: There’s no country for old men in Hollywood—and that matters

If by some fluke, Oldman doesn’t prevail, Daniel Day-Lewis may be next in line for his portrait of a meticulous and insufferable dressmaker. Day-Lewis has proclaimed that this will be his final performance as an actor, and if that’s the case, he has sealed his career with a perversely understated signature. Set in 1955 London, Phantom Thread is a sublimely claustrophobic chamber piece set in a world of aristocratic fashion. Day-Lewis portrays an obsessive artist named Reynolds Woodcock, who seeks truth in the folds of a frock—the last of a dying breed before the art of clothing surrenders to a pop culture of supermodels and designer labels. Flanked by a stern sister who sees right through him (Lesley Manville) and a lovely muse who quietly undermines him (Vicky Krieps), Woodcock is a career misogynist who finally meets his match. Out of this slender thread of a film, writer-director Paul Thomas Anderson constructs a sly domestic thriller—exquisite, but too delicate and austere to win over the Academy.

Call Me By Your Name

There is much pleasure to be had in this bucolic game of gay flirtation and dizzy passion, set in an Italian country villa in the 1980s. This is the only nominated film where the issues of the world simply fall away. With Luca Guadagnino directing a screenplay by James Ivory, adapted from the novel by André Aciman, Call Me By Your Name unfolds as a retro reverie, a vicarious excursion into the lost world of the quintessential European movie. Everyone and everything is beautiful, consequences be damned. Timothée Chalamet richly deserves his Best Actor nomination as a precocious 17-year-old who fights boredom in three languages as he succumbs to the charms of a visiting American academic (Armie Hammer). I wasn’t as enamoured by this film as most critics—I felt it didn’t earn its painless ending, and it failed to address the creepy age difference between the lovers. But it was a nice place to visit.

We feel we’ve been here before. After All The President’s Men, it’s downright nervy to make another movie about journalists at the Washington Post saving America from tyranny. But in the wake of Donald Trump’s electoral victory, and his unprecedented assault on the mainstream press, Steven Spielberg rushed The Post into production. And the energy of his mission is palpable, as if the film itself is a newspaper being rushed to print on deadline. Streep’s performance as Katherine Graham, who inherited The Post after her husband died by suicide, is riddled with brilliant detail, and she is worthy of her 21st Best Actress nomination. And Tom Hanks is predictably solid as the irascible Post editor Ben Bradlee. Spielberg directs with his habitual heavy hand, spelling out his mission in headline-sized bold italics. Still, for an old journalist, the scenes of thrashing typewriters, the pneumatic tube zooming rolled-up copy to the pressroom, and lead type falling into place is the ultimate guilty pleasure. But while old-fashioned journalism may yet save the world, don’t expect it to win any Oscars.

FILED UNDER: 2018 Academy Awards dunkirk Editor's Picks Get Out Lady Bird Oscars 2018 The Shape of Water Three Billboards Outside Ebbing