Mozart meets 'Married At First Sight': a fix for opera?

If we can have opera as funny and contemporary as 'A Little Too Cozy'—'Cosi fan tutti,' get it?—who needs Mozart at all? 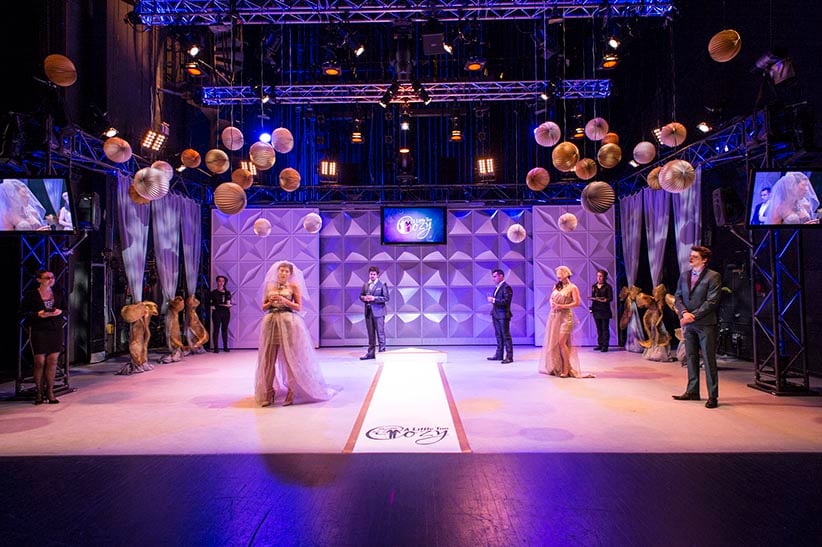 The original plot of Mozart’s Cosi fan tutte makes leaps that may have been difficult to follow back in the 18th century when it was written. Two men bet that their fiancées are faithful, then test the women by trying to seduce them in disguise. When they eventually succeed it proves the saying of the opera’s title, “so do all,” i.e., all women are unfaithful. A nice 21st-century idea.

A brand new adaptation of Cosi just premiered in Banff. A Little Too Cozy proves that a historic work can be translated for contemporary audiences without losing its soul, but it’s so good that it ends up asking another question: is adapting classics the best opera can do today?

The new adaptation is by Toronto-based Against the Grain Theatre‘s Joel Ivany, produced through the Banff Art Centre’s Open Space opera residency. This isn’t Ivany’s first time “transladapting” a libretto by the 18th-century Ventian poet Lorenzo Da Ponte, and he has handily solved almost all of Cosi’s believability problems with his characteristic bawdy wit.

Instead of a bet, the premise is a reality tv show like “Married at first sight ” where couples only meet at their wedding. In Cozy, two couples have texted and emailed themselves into getting engaged; they have fallen in love without ever having met, a love they have to defend against the cynical attacks of the show’s host, Donald Alphonso, and his tough production manager, Despina, over a two hour-long season final. If they pass this final test they get a wedding and $100,000.

It’s a romp. It has lines that, were this an actual reality show, would become classics: “All looky no touchy, no looky all touchy.” But comedy time-travels better than drama, and Cosi’s earnest side needed the most work. Here it’s a story about manipulation. The producers seem to be against the cast and the cast may be against each other, but what’s really going on? The producers are pretending to just deliver messages from those who really make decisions, and the cast justify lies and betrayals by blaming the show. Everyone is acting and everyone pretends not to be acting.

After Figaro’s Wedding (Nozze de Figaro ) in 2013 and Uncle John (Don Giovanni ) last year  Ivany has now done all the operas that Mozart wrote with Da Ponte, which have some of Mozart’s best music, so they have a safe appeal to conservative tastes. “Worst case,” Ivany admits. “It sounds beautiful but you hate everything about it.”

Having finished off Da Ponte, he’d like to go further. “Not just playing with text but telling a new story… What can we do that’s not being done anywhere else? Let’s do that.”

Will he be able to? Open Space has another year and the Banff Centre seems like a dream producer, something between a school and a commune on the mountainside. “Banff audiences start out where Against the Grain audiences end up,” says Ivany. Rehearsal and performance space is plentiful, singers are free (Open Space is a training program so the young cast and crew get room and board). And there are the Centre’s other programs to pick from: dancers, writers, and filmmakers who can be press-ganged over a beer. Outside universities, is there another place like it in Canada? The video spots  and animations for Cozy would have been prohibitively expensive anywhere. In Banff “all the infrastructure is already here… while in Toronto it’s ‘let’s get Steve. He has a speaker,’ ” says Ivany.

While we wait to see how far Banff can go, there’s little hope anywhere else. We’re not even sure what infrastructure for new opera in Canada would look like. Big companies rarely commission because new works are large financial risks for thousand-seat halls. “Commitment to theatres is crippling.” Ivany explains. Vancouver Opera wisely put 2014’s  Stickboy  in the downtown Playhouse where it could actually sell out. But Stickboy  was a rarity in many ways; it was written by local poet Shane Koyczan about childhood bullying in British Columbia. More normal is the Canadian Opera Company’s upcoming Hadrian, a canny response to Canadians’ demand for stories about 1st century Rome, or their Pyramus and Thisbe. You couldn’t sound more dead, white, and European—their choice to make, I guess, but not smart if you’re running a nonprofit based on donations. Or trying keep an art alive in a diverse country.

“Anything having to do with the present is missing from the Canadian scene,” says Michael Mori, the director of Tapestry, an opera company known for  libretto “labs” and “booster shots” that produce new operas in a weekend. He likes the competition in Toronto. “When you have one Calgary opera, one Montreal opera, one Canadian Opera Company… then it’s a museum.” But he makes a distinction between new opera and contemporary opera. “One is just made today and the other has something to do with the times.”

It’s a useful idea to put Cozy in its proper context. Adaptations allow for contemporary audiences to cut through confusing language, outdated dramatic standards, and bigoted ideas. Though they don’t make the bold and necessary claim of a living art—to have something to say and be said in this way—they still put us in an unusual position. Adaptations remind us of the power opera once had.

FILED UNDER: Against the grain Banff Centre Mozart Opera