My monkey could do that

It’s primate art and Pockets Warhol is an international star

Pockets Warhol won’t let you watch him paint. It’s not that he’s self-conscious, but rather that the 22-year-old capuchin is so happy to see a non-monkey at the Story Book Farm Primate sanctuary in Sunderland, Ont., that he immediately runs around, wanting to play. Only when he is alone does the artist go to work.

On Sundays, Charmaine Quinn makes the two-hour drive from Toronto and drops off blank canvases and non-toxic children’s paint for Pockets. Within a few hours, she will have two new pieces by him, which will sell for as much as $370 each. At that price, Pockets is the No. 8 top-selling animal artist in the world, according to the website Pawnation. His work has been featured in art shows as far away as Estonia, Finland and Germany, according to Quinn, and his lifetime earnings to date exceed $25,000.

The art world would have been deprived of Pockets Warhol if it weren’t for Quinn, a volunteer at the sanctuary, who recognized his physical similarities to Andy Warhol when he arrived in 2009. “I looked at the massive white hair around the face, the very white skin, and the nose and mouth,” she says of what inspired her to give him the surname. “I guess it wouldn’t be flattering for Andy Warhol.” Pockets’ paintings, however, bear no resemblance to those by the pop-art legend. He paints with his hands, tail and feet. Sometimes, claw marks will go right across the canvas. “He’s definitely an abstract expressionist painter—very much like Joan Mitchell,” says Scott Cameron, a Toronto-based artist known in the art community as Scotch Camera. “He’s not doing drips like Jackson Pollock and he’s not doing big lozenges like Mark Rothko.”

Animal art, while often compared to work any child could do, is not something collectors stick on their fridges with magnets. Congo the chimpanzee, the top-selling animal artist of all time, had three paintings sell together at a 2005 auction for more than $25,000. His work has been on display at the Art Gallery of Ontario and rumour has it that Pablo Picasso hung one of Congo’s paintings on his wall after receiving it as a gift.

Last month, Brent, a 37-year-old primate from Chimp Haven in Louisiana, won a $10,000 grand prize in a chimpanzee art contest sponsored by the U.S. Humane Society. Jane Goodall, the renowned primatologist, was one of the judges. “A lot of the chimps that are doing art are probably in sanctuaries, in human environments,” says Andria Teather, CEO of the Jane Goodall Institute of Canada. “It’s not something they’d be doing in the wild, but it’s a form of stimulation.”

It’s also a means to help raise funds for sanctuaries. After buying one of Pockets’ paintings, Cameron initiated plans for a collaborative art show with the monkey. Together with fellow human artist Brent Roe, he and Pockets went to work on more than a half-dozen pieces for the Art Pioneers Exhibit opening at the Gladstone Hotel in downtown Toronto this week. Half of the proceeds will go to Story Book Farm, which relies entirely on donations to run the day-to-day operations for its 26 residents—one being Darwin, the Ikea Monkey. “[Pockets] is the only resident in there bringing in any money,” Cameron says.

While Pockets can’t say whether he approves of the final product or not, his collaborators are confident these pieces will sell. “It’s not that big of a stretch between the way he paints and the way I used to do some of my abstract work,” Roe says, noting one difference with Pockets’ workspace. “The straw sticks to the paint and gives it some interesting texture.”

But Pockets’ work is not as random as one might imagine. He is selective in his choice of paints, sometimes throwing away certain colours if they are not to his liking. “It seems he has some awareness of what he’s doing, on some level,” says art blogger Andrea Carson Barker, noting Pockets’ tendency to paint in the middle of the canvas. “It would be possible for him to paint only on the lower left hand corner or even onto the floor beyond the canvas.”

Cameron likens Pockets’ work to another type of art. “This guy just feels it like it’s pure jazz,” he says. “He feels the colour.” 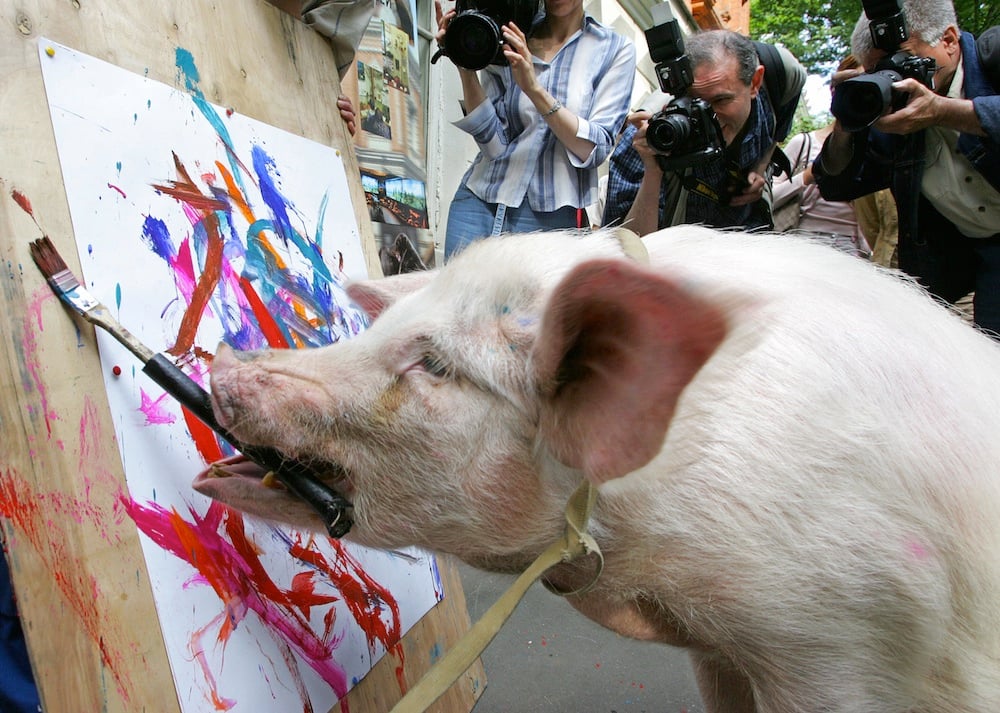 Pockets Warhol is far from the first animal to wield a paintbrush. Here, a pig called Malevich paints in downtown Moscow during an "Animal Arts presentation" by a group of Moscow artists, aimed at demonstrating animal painting skills. (A pig, crow and snails also took part in the performance.)  (Alexander Nemenov/AFP/Getty Images)