Nate Parker, rape allegations and The Birth of a Nation 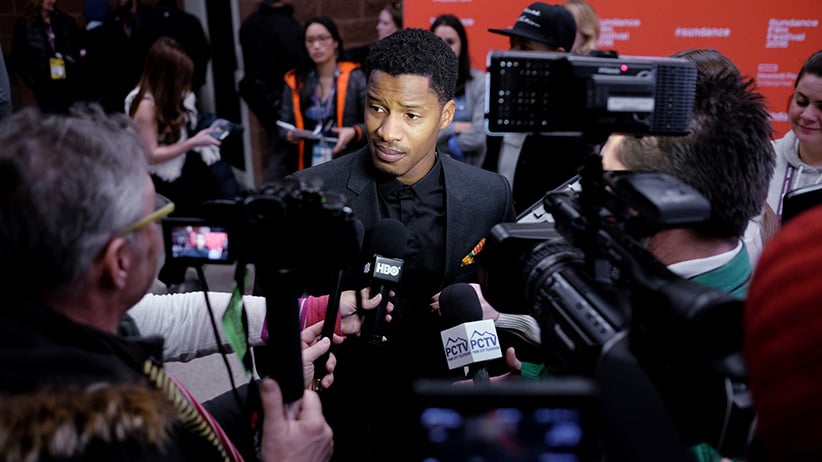 Nate Parker attends the ‘The Birth Of A Nation’ Premiere during the 2016 Sundance Film Festival at Eccles Center Theatre on January 25, 2016 in Park City, Utah. (Nicholas Hunt/Getty Images)

“So you seek revenge?”

The idea of revisiting the past, revising and redressing its wrongs, and especially America’s history of racial injustice, has emerged as a key theme at TIFF 2016. It’s there front and centre in the festival’s opener: a remake of the 1960 western that fits Denzel Washington into spurs previously worn by Steve McQueen.

TIFF’s real test of revenge vs. righteousness, however, is The Birth of a Nation, an American period drama by writer/director/star Nate Parker, who signed a much publicized $17.5-million deal with distributor Fox Searchlight after the film’s premiere at the Sundance Film Festival, a sum cited as the richest in the festival’s history.

The story of Nat Turner (played by Parker), a Virginian slave preacher who led a bloody uprising against white overseers in 1831, The Birth of a Nation had it all: an awards-baiting story of against-all-odds ennoblement, a resounding social resonance in the contemporary moment of Black Lives Matter, even a title that was boldly reclaimed from D.W. Griffith’s “classic” (and wildly racist) 1915 American silent film. The Birth of a Nation seemed poised to propel Parker into the ranks of the Hollywood elite—until Parker’s past starting avenging itself upon him, unfolding its own revenge plot.

In 1999, when Nate Parker was a student at Penn State, a female student accused him and his roommate, Jean McGianni Celestin, of sexual assault.

The accuser maintained that Parker and Celestin raped her while she was unconscious in her dorm room, following a night of heavy drinking. The case was tried and Parker was acquitted, after his defence attorney delivered a closing statement that hinged on an argument about the difference between unconsciousness and not being able to remember, calling the victim’s memory “too convenient.” At the time of the trial, Celestin was convicted, but the case was overturned. As for the unnamed woman: she dropped out of school and twice attempted suicide. In 2012, her third attempt proved fatal.

When these reports resurfaced following Sundance, threatening Parker’s big-ticket golden boy image, he at first seemed indignant. “I will not relive that period of my life every time I go under the microscope,” he told entertainment news website Deadline in August. “What do I do? When you have a certain level of success, when things start to work, things go under the microscope and become bigger and bigger things.” 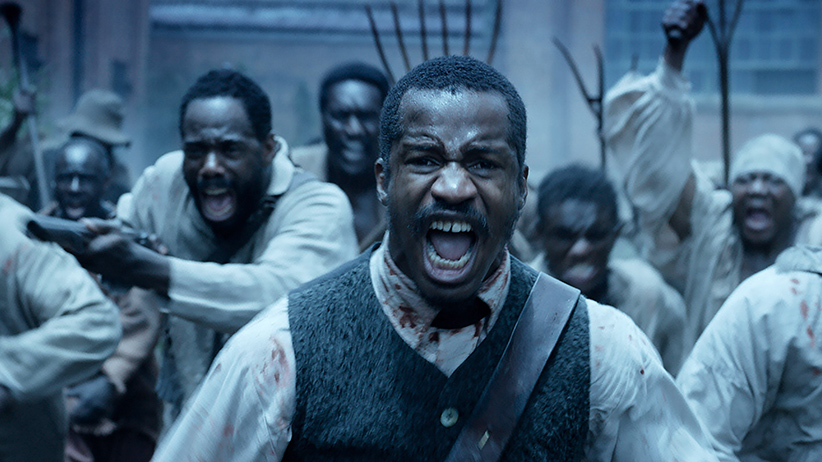 A still from Nate Parker’s The Birth of a Nation. (2016, TM and © copyright Fox Searchlight Pictures. All rights reserved. / Courtesy Everett Collection)

Writing about Nate Parker in the New York Times, Roxane Gay spoke to the difficulty in trying to understand him. “I want to have empathy for him,” she wrote, “but everything he says and does troubles me. You see, what happened in 1999 was a ‘painful moment’ in his life. Most of what he has to say about that ‘painful moment’ involves how he felt, how he was affected. The solipsism is staggering.”

Maclean’s was initially offered the opportunity to speak to Parker. The magazine was told he would gamely respond to questions about his past, and was even encouraged by his staff to raise the subject of his rape allegation and court case—a rarity in a closed-shop media and public relations culture that works diligently to keep both journalists and talent “on-message.”

But as TIFF drew near, denunciatory press mounted, the proposed interview opening narrowed and then vanished altogether. So there was no interview with Parker. But there are still plenty of questions.

The well-worn cliché of “separating the art from the artist,” feels like an unproductive place to start.

History has routinely proven that the morally bankrupt (D.H. Lawrence, Pablo Picasso, Coco Chanel, Joan Crawford, Alfred Hitchcock) are capable of not just good, but superlative contributions to art and culture. The question relies on a kind of bogus semantic equivalency, weighing bad (in the sense of ethics and virtues) against goodness (in terms of aesthetic merit).

“What we want to do is show the film,” says TIFF artistic director Cameron Bailey. “With us, it started with the film and that’s still our focus.”

Other prominent cultural gatekeepers have chosen to proactively shut Parker out. The American Film Institute (AFI) in L.A. recently cancelled a screening and Q&A with Parker, which would have been his first public appearance since the scandal broke. In making the decision, AFI dean Jan Schuette said: “I have been the recipient of many different passionate points of view about the screening, and I believe it is essential that we discuss these issues together—messenger and message, gender, race and more—before we see the film.” The institute scheduled a “special moderated discussion” to discuss the issues surrounding the film, and the politics and ramifications of screening it at all. The implication is that even showing the film is a tacit endorsement of it, and of Parker.

Bailey calls The Birth of a Nation “an important story.” Doubtless, it is. Yet it’s one told with blunted artlessness. Parker’s approach is flat and theatrical, spiked with sporadic second-hand aesthetic flourishes—like a human-suffering diorama depicting a mass lynching that could be an outtake from the 2013 Oscar-winner 12 Years A Slave, directed by (the other) Steve McQueen. It plays like the inverse of the Griffith epic from which it takes its name: a watershed technical and artistic achievement framed around reprehensible material. In a way, that Parker’s The Birth of a Nation isn’t very good proves strangely comforting. Were it some transcendent work of art, perhaps the calculus of squaring it with its creator would be a little trickier.

The controversy around Parker and Celestin (who shares a story credit on The Birth of a Nation) does nothing to enliven the film itself. Unlike, say, Alfred Hitchcock or Roman Polanski—whose well-documented perversions entangle with their films in ways that can potentially deepen an understanding of the nature of male power and obsession—it’s not as if Parker’s depiction of slavery as incontrovertibly awful does much to assuage the allegations levelled against him. Nor does one need to be an accused rapist to deliver the self-evident message that slavery is bad.

If anything, certain parts of the film feel like they’re actively attempting to mend its maker’s image. When Parker’s character first resolves to raise arms against his tormenting white masters, it’s because his wife is savagely beaten (and presumably raped) by sadistic slave hunters, a plot point that casts Nat/Nate as a doomed historical hero, and an avenger of battered women. At its worst, Parker’s reputation and his movie seem to be in direct conflict with one another.

For a film that is explicitly about the necessity of remembering historical traumas, the PR apparatus around The Birth of a Nation has been more about forgetting. Or at least about proving that its maker is a changed man, rueful and ashamed, honest-to-God.

Petra Epperlein and Michael Tucker’s Karl Marx City, screening in TIFF’s documentary program, explains that the Germans, who would know, have a word for this: Vergangenheitsbewältigung—the act of overcoming the past. It’s a process that demands diligence, and constant thought. Is overcoming the past about denying it? Or about critically reflecting upon it, about forcing yourself to reckon without the cheap catharsis of reconciliation?

Still: picking over Parker’s interviews, Facebook posts, official statements, even his face on screen—heavy and sorrowful—yields only bitter fruit. Each show of humility and repentance feels calculated. They betray a sense of nothing more than an actor acting, staying narrowly “on message.” They feel, to borrow his defence attorney’s phrase, a bit too convenient.