How one Newfoundlander revived Blockbuster in his basement

There’s a house in St. John's where the video era lives on in all its grainy glory 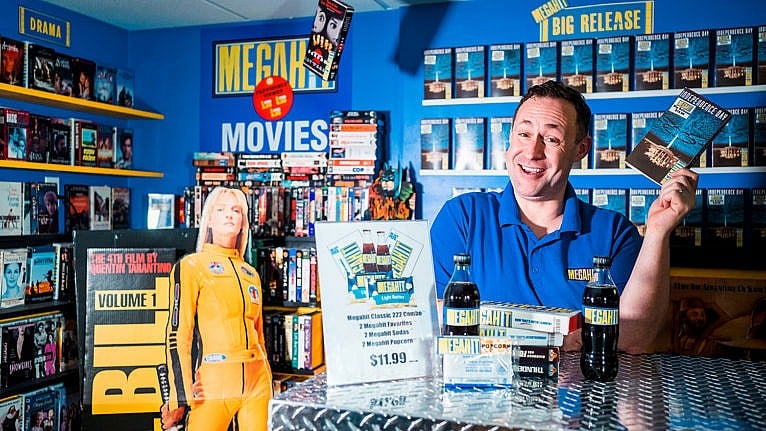 Corey Lynch has built a blue-and-yellow time machine in his St. John’s basement. It’s a portal to his own past, and maybe yours, too.

Welcome to Megahit Video—the alternative universe where it’s Friday night, Netflix doesn’t exist and you need to pick snacks and negotiate with your family or your friends about what video to watch, then hope all the copies aren’t already rented out. In a literal sense, what Lynch has built is a deeply loving homage to the all but defunct Blockbuster Video chain. But in a truer sense, he has created pure, life-sized nostalgic joy. “I am a lover of things,” he laughs, mentioning his extensive VHS and toy collections as evidence.“I’m generally all-in on the things I love. Now, of course I realize this is the extreme. I won’t also build a toy museum next door.”

It all started with a pandemic renovation project and Lynch’s search for a theme for a new basement wet bar. He’s a lifelong movie buff, so the idea seemed obvious, and his wife was game. “It was craving that sense of nostalgia and making sure I had a place to go where I felt comfortable and warm,” he says. “That was the experience of going to the video store when I was young—it was so exciting.”

Lynch doesn’t consider himself a nostalgic person, simply because he never left behind the things he loves. Megahit is stocked with his own collection of 1,000 VHS tapes, with about 350 on display at any one time, along with dummy movie boxes he crafted in Photoshop. This isn’t a store where you can actually rent movies; it’s a monument to that extinct creature, like a museum exhibit. The attention to detail is what makes it all sing: a big promotional cardboard cutout of Uma Thurman in Kill Bill, a “Big Release” wall with 30 (fake) copies of Independence Day, a giant red M&M’s figure holding up a tray of candy, the cobalt blue walls, every item you can see branded within an inch of its life.

Lynch’s favourite detail is the storefront. A contractor friend managed to procure and install a steel and glass commercial door alongside two steel-framed windows, so that when you step outside of Megahit and look back at it from the other side of his basement—Lynch and his family live in his former childhood home—there is the storefront, suspended in time. The windows look out into his daughters’ playroom, but when Lynch films Facebook videos of movie reviews or goofy comedy sketches inside the store, he erases that domestic glimpse with a greenscreen view of colourful St. John’s houses.

And for actually watching movies, it’s all about VHS for Megahit’s proprietor—a little grainy, maybe, with wonky tracking or sound, exactly the way movies feel in his memory. “We are an analogue video store for the digital age,” he likes to say. It’s easy enough to find VCRs these days, but what’s tricky is finding TVs that connect to them, so Lynch has a dongle that connects the VCR to his MacBook so he can stream to his TV inside his Blockbuster “store.” He has four VCRs at the moment, because they are not repairable. “When they go, they go,” he says. “We give them a Viking funeral.” He watches movies, he says, “like I’m 14.” Among his favourites are Big Trouble in Little China, Halloween, Jurassic Park and Raiders of the Lost Ark, which he considers a “perfect movie” that cannot be improved upon.

Lynch sees Megahit as an immersive experience to be shared with everyone who holds warm memories of those Friday night outings (“members” are welcome to join the fun on its Facebook page). The name obviously invokes Blockbuster, but he deliberately gave it a generic tweak so that it would conjure up everyone’s long-ago local video store.

As a teenager, Lynch picked his way through the construction zone of a new Blockbuster about to open in St. John’s, where he found a manager who hired him on the spot. That high school job felt like he’d landed in Hollywood, with the crowd and energy every Friday night feeling like a nightclub. The video store was the place to be, until one day it wasn’t. Blockbuster had 9,000 stores worldwide at its peak, but by 2018 just one remained, in Bend, Ore. Everyone retreated to their couches and their streaming services where they never had to worry about all the copies being rented. Good thing Corey Lynch, like the hero of many a good caper movie, built us all a time machine.

This article appears in print in the February 2022 issue of Maclean’s magazine with the headline, “Rewinding with gusto.” Subscribe to the monthly print magazine here.