Instead of defusing the national anthem debate with its new policy, the NFL has managed to anger parties on both sides of the issue. 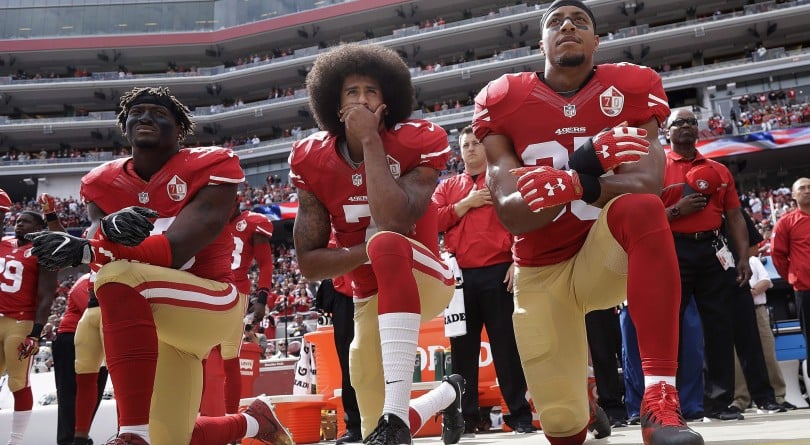 Under the NFL's new policy, players who choose not to stand for the national anthem, like Colin Kaepernic, will force their team to pay a fine. (AP Photo/Marcio Jose Sanchez/File)

In an attempt to defuse its national anthem debate with its new policy unveiled Wednesday, the National Football League has instead managed to upset sides on both sides of the issue.

Flanked by four trusted owners, Roger Goodell delivered the NFL’s new anthem policy. It was agreed upon during the NFL Spring Meetings without consultation from the players.

“We want people to be respectful of the national anthem,” Goodell said in a press conference. “We want people to stand, that’s all personnel, and make sure they treat this moment in a respectful fashion. That’s something we think we owe. [But] we were also very sensitive to give players choices.”

MORE: Why Colin Kaepernick sat down

The basic overview of the new pregame manual rules are as follows:

1.) All team personnel on the field should stand during national anthem.

2.) Personnel who don’t want to stand have the option to stay in the locker room.

3.) Teams will be fined if any personnel on the field decides not to stand.

Previously, all players were required to be on the field for the anthem ceremony, but standing was suggested, not mandatory.

The new rule was billed as a compromise but the players weren’t consulted.

It’s important to note that teams, not individual players, are fined by the league. That’s a loophole to try and get around the fact that this discipline wasn’t agreed upon in the CBA.

The NFL ruling actually leaves room for teams to enact harsher penalties on protesting players at their own discretion.

The term “appropriate respect for the anthem” is often used. Who decides what is and isn’t appropriate? Who is going to be the arbitrator of what is and isn’t respectful? Remember, this controversy originated from the fact that large groups of people had different interpretations of what is or isn’t disrespectful to the American flag.

When asked what “constitutes disrespect,” Cowboys COO Stephen Jones said: “You’ll know it when you see it.”

That’s a fair determining factor for pornography, not protests.

Last season, when Philadelphia Eagles defensive lineman Chris Long put his arm around teammate Malcolm Jenkins — who had a raised fist during the anthem — were they both protesting? Was Jenkins? You can see where this conversation is going to go. The debate will be what is and isn’t a protest. Just like it was when Kaepernick went from sitting on the bench during the anthem to kneeling after he was advised it was more respectful to the military.

What if you stand but keep your helmet on? Will a clenched fist in the air be penalized? Turning your back on the flag? If you warm up and stretch during the anthem as LeSean McCoy did, is that considered disrespectful?

How much is the fine? Will you be fined more for repeat offences? Will a team be disciplined based on the amount of players protesting or is it a flat rate once one does it? None of these questions were addressed on Wednesday.

The biggest mistake is that the NFL is once again trying to rule with an iron fist unaware of the consequence. Rather than let this story fatigue in the news cycle, they have reinvented it. Can you name three players who were protesting at the end of last year? Can you name one? People associate Colin Kaepernick with protesting, but he didn’t play a down last year. By the time the Super Bowl came around last season the larger issue had subsided from the general football discussion.

Bringing it up on a day that body camera footage of an athlete, Milwaukee Bucks rookie Sterling Brown, being attacked by police was scheduled to be released, was not great optics management either.

The issue is not that they have a rule around standing for the anthem. The NBA has had a rule making it mandatory players stand at the foul line for the national anthem for the last 21 years. It was put in place in reaction to Chris Jackson not wanting to stand for the anthem due to his faith.

The difference is the NBA allows other adequate outlets for players to speak their mind. Adam Silver elected not to punish his players when they wore “I can’t breathe” shirts during warmups to protest the death of Eric Garner at the hands of police by in 2014.

Silver also elected to publicly back his players when they were attacked by the President and other commentators when they have spoken their mind.

NBA owners, who are five years younger on average than NFL owners, have a good relationship with their players and a general social consciousness.

RELATED: What Colin Kaepernick can teach us about citizenship

Take, for example, Vivek Ranadive. The Sacramento Kings majority owner refunded ticket money to fans and took the mic at mid-court with his players surrounding him to passionately pledge his franchise’s allegiance in solving the police brutality issue after protesters prevented fans from entering Kings games this season after Stephon Clark was killed by police while unarmed.

That is a far cry from Houston Texans owner Bud Adams saying: “We can’t have the inmates running the asylum” in an owners meeting looking for a resolution to these issues last season.

NFL owners don’t see the players or fans as partners. They see the players as employees and fans as customers. As a result, players continue to take the league to court and often win, and fan engagement continues to drop.

It is no longer mandatory to partake in the national anthem ceremony but that’s not a gift to the players. If a player wants to protest and raise awareness to certain issues they want to be visible in their protest. The whole point of protests is to object and show disapproval.

This compromise of staying in the locker room won’t appease the other side of the debate, either. It just shifts the conversation from taking attendance on who is kneeling, to who is absent.

What this invites is fans and TV producers to count the personnel on the sidelines. Is that more respectful to the flag?

Anthem resolution is likely to be announced this afternoon, and it is expected to allow players to stay in the locker room during anthem and fine teams for any flag/anthem disrespect, per league source.

Although Donald Trump has already claimed this as a movement in the right direction after urging owners during a 2017 campaign rally, “Wouldn’t you love to see one of these NFL owners, when someone disrespects our flag to say, ‘get that son of a b—- off the field right now. Out. He’s fired. He’s fired.”

In the wake of yesterday’s decision he is suggesting even further measures than fines, like deportation.

"You have to stand proudly for the National Anthem. You shouldn't be playing, you shouldn't be there. Maybe they shouldn't be in the country...the NFL owners did the right thing" -President @realDonaldTrump pic.twitter.com/bt36t4EX5u

The issue is so divisive owners aren’t uniform in their belief despite the spin that the vote was unanimous. San Francisco 49ers CEO Jed York abstained from the vote.

49ers owner Jed York abstained from voting today on the NFL's new anthem policy. The owner of the team that employed Colin Kaepernick and Eric Reid told reporters: "I think there are a lot of reasons, and I'm not going to get into all of those reasons.... https://t.co/OFcWtaMxfl

“I never want to put restrictions on the speech of our players” he explained.

As I suggested when this mess started, the NFL would have been better off getting rid of the anthem ceremony altogether if it wanted plausible deniability.

Instead, Roger Goodell continues to try and make everybody happy. With this new anthem protest policy, he found a way instead to leave everyone upset.