'There is not just one single way to exist as an Indigenous person. There are multiple ways,' says the Griffin Poetry Prize winner 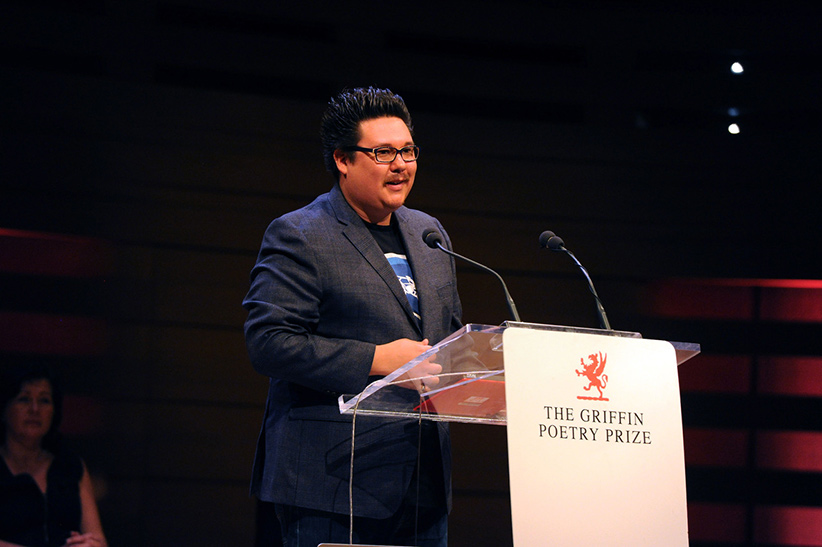 Jordan Abel is a young poet of Nisga’a heritage who won the Canadian 2017 Griffin Poetry Prize, Canada’s most generous literary award for poetry, for his long work Injun. Born in 1985 and raised in Barrie, Ont., and Lethbridge, Alta., Abel holds a B.A. from the University of Alberta and is currently working on a PhD at Simon Fraser University. His academic interests are in Indigenous studies and digital humanities. He lives in Castlegar, B.C., with his wife, Chelsea Novak. Maclean’s caught up with him shortly after his Griffin victory was announced. This interview has been edited for length and clarity.

Q: You must be extraordinarily pleased about the Griffin. How are you feeling?

A: Pretty good! I mean, absolutely surprised and a bit overwhelmed. But mostly pretty good.

Q: Injun is dedicated to “the Indigenous peoples of the Americas.” Does the Griffin Prize in some sense legitimate more than just your book?

A: For me, that dedication is essential. In this book, my writing is in resistance to the problematic representations of Indigenous peoples in the Western genre, and likewise is for everyone that has felt that personally. The book is, of course, also for allies, non-Indigenous peoples and settlers. But I think it is first and foremost for everyone who has struggled against these painful misrepresentations. I don’t really think the Griffin Prize legitimates that struggle. That struggle was and is real with or without the prize. That being said, the Griffin Prize certainly legitimates my conceptual approach to the subject.

Q: Your father belongs to the Nisga’a people of British Columbia and your mother you have called “a white settler lady.” Where do you situate yourself in the complex world of race and racial heritage?

A: Well, I think situating and positioning are key concepts here. What so many people misunderstand about indigeneity is that it is not a monolith. There is not just one single way to exist as an Indigenous person. There are multiple ways. I think Bonita Lawrence said it best in her book “Real” Indians and Others: Indigenous identity is often best “explored as a negotiated and highly contested set of realities.” My position within indigeneity then is a negotiation between being a Nisga’a person, an urban Indigenous person, and an intergenerational survivor of residential schools.

Q: Recently there has been a brouhaha in the world of Canadian literature over what gets called appropriation of voice—writers using stories that do not belong to them. The epigraph to Injun from Mark Twain states, “It is better to take what does not belong to you than to let it lie around neglected.” How do you think of Injun in light of the appropriation of voice issue?

RELATED: How Tomson Highway blazed a trail for Indigenous artists

For me, what’s really interesting is how easily we forget. The recent “brouhaha in the world of Canadian literature” is part of a continuum of discussions about appropriation. What’s important to remember is that Indigenous peoples and allies have been fighting against appropriation and resisting colonialism for literally hundreds of years. And yet we’re still having the exact same discussion.

For the last month, the discussion has been oriented around a hypothetical “appropriation prize.” But just weeks before that we were talking about non-Indigenous artist Amanda PL’s artwork as culturally appropriating Norval Morrisseau’s work. Last year we were talking about Lionel Shriver’s keynote at the Brisbane Writers Festival where she said that she was “hopeful that the concept of ‘cultural appropriation’ was a passing fad.” There are literally hundreds of examples out there. And yet we continue to have this discussion over and over again.

Q: Your approach to the writing of poetry is conceptual. In Injun, you take an existing body of public domain material—91 Western novels—and then use your imagination, as well as the search function on a computer, to re-arrange bits of text that include the word “injun” into poems. Is all of your work as a poet conceptual? What attracts you to this way of writing? And what poets have influenced your work?

A: Yes, all my work as a poet so far has been in at least some way conceptual. Although I would hesitate to label myself a conceptual poet. Instead, I would suggest that I am a Nisga’a writer who utilizes some of the tools and methodologies of conceptualism in order to write about indigeneity.

What appeals to me most about conceptualism is the fluidity between texts and the relative ease of working intertextually. We talked about this a bit before, but I find that conceptualism really allows me to address my position within indigeneity (the highly contested and overlapping set of realities) in a meaningful, transparent and honest way.

Also, it’s so tough to narrow down my influences! Certainly for this book I was incredibly interested in the cut-up. So I have to list both Brion Gysin and William Burroughs. But at the time I was writing the book I was also reading a lot of Annharte and Lisa Robertson. Certainly, there are a number of writers who write in a similar vein who I deeply admire. I am a huge fan of M. NourbeSe Philip’s Zong! and Moez Surani’s ةيلمع Operación Opération Operation 行 动 Oперация.

Q: Whom do you think of as the audience for your poetry? Does an awareness of or hope for readers influence your writing process?

A: You know, I was reading a review the other day where the reviewer essentially implied that I was writing exclusively for settlers with the specific intention of unsettling them. I don’t think this is entirely true. I mean, I’m glad that settlers are reading my writing. But I am writing for both Indigenous and non-Indigenous audiences. Likewise, my intention isn’t solely to unsettle but is also to invite in.

In terms of the reader, I am not so much forming my writing based on who I think will be reading my work. Instead, I am thinking quite deeply about the practice of reading while I’m writing. Injun, I would argue, is a non-linear book. And by that I mean that there are multiple reading pathways through the book. I can absolutely imagine a reading process for this book in which the reader is asked to flip forward, flip back, and even invert the book while reading backwards.

Q: You are in a PhD program in Canadian literature at Simon Fraser University. All of your poetry collections have won awards, including, now, the biggest of them all. Is there any tension in your writing life between Jordan the poet and Jordan the scholar?

A: For sure! So I am doing a PhD in Indigenous poetry and digital humanities. I make that distinction because Indigenous literature is a separate field from Canadian literature. The project that I’m currently working on for my PhD is academic, but I believe it takes a lot of cues from my creative work. Specifically, the kind of data-mining work that occurs in my last two books [Un/inhabited and Injun].

What you read is a political decision. What you study is a political decision. All of my academic work is designed around supporting and thinking about Indigenous poetry and Indigenous poets. In many ways my work as a scholar is informed by my interests as a writer. That being said, I think the biggest tension right now is actually trying to be both a poet and a PhD student at the same time.

Q: What are you working on now, if I may ask?

A: I am currently working a number of different projects. But the one that I have been focusing on recently revolves around a series of creative distant readings of James Fenimore Cooper’s novel The Last of the Mohicans. The project was in part inspired by Roxanne Dunbar-Ortiz’s argument [in An Indigenous Peoples’ History of the United States] that Cooper’s novel plays a role in reinventing the colonial origins of the United States, and in creating a narrative that was “instrumental in nullifying guilt related to genocide.” I would say that this work seeks to disrupt the colonial logic in the novel by displacing (and reorienting) the text itself in order to expose the problematic representation of Indigenous peoples (which is a theme I return to quite often). The project is also deeply inspired by current digital humanities techniques of visualization, machine reading and algorithmic allocation. A few pieces from this project were published recently (or will be published soon) in The Capilano Review, The Malahat Review, Canadian Literature, The New Quarterly, Datableed and by above/ground press in a chapbook called Timeless American Classic.