Photographer Meryl McMaster: 'How the world is really transformed' 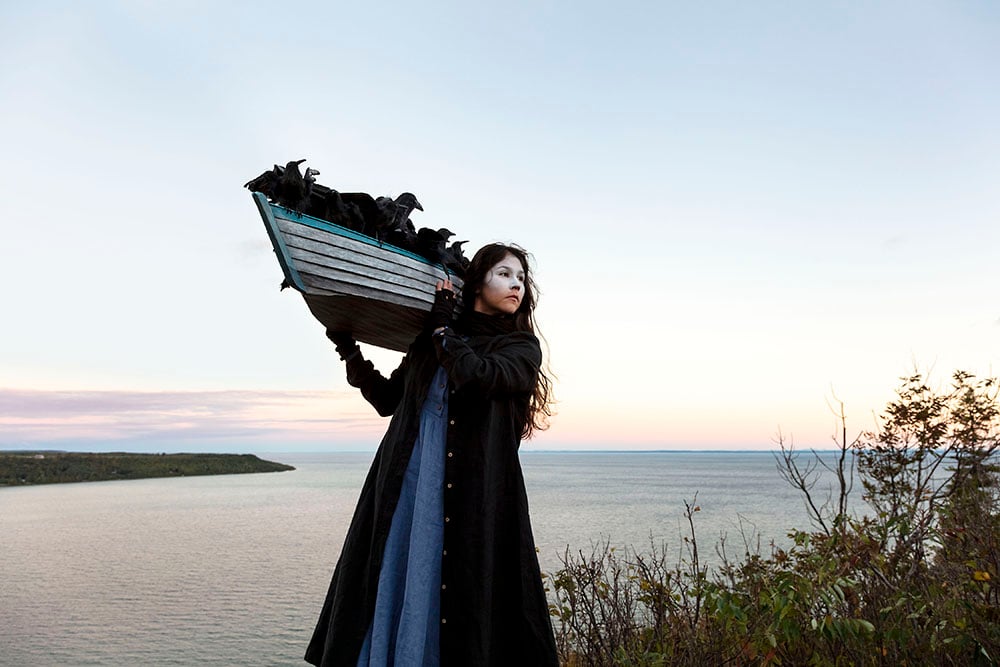 On the Edge of This Immensity, from the series As Immense as the Sky, 2019, chromogenic print. (Courtesy of Meryl McMaster, Stephen Bulger Gallery and Pierre-François Ouellette art contemporain)

Photographer Meryl McMaster’s latest series, As Immense as the Sky, consists of self-portraits shot against the Canadian landscape. The images involve elaborate costumes, props and sculptures, all used to explore the intersection of her Cree and European heritage. The series is a primary exhibition at the Scotiabank CONTACT Photography Festival, opening at the Ryerson Image Centre on May 1 in Toronto. McMaster was interviewed for Maclean’s by Wanda Nanibush, the Art Gallery of Ontario’s curator of Indigenous art. Their conversation has been edited for length and clarity.

Q: Let’s start at the very beginning. Where are you from and how did you get started as an artist?

A: I was born and raised in Ottawa. All my family’s is from out West but my parents moved to Ottawa for work before I was born. My dad [Gerald McMaster] is from Red Pheasant First Nation in Saskatchewan, so I’m part of the Red Pheasant First Nation, so I’m Cree. And then I’m a member of the Siksika First Nation in Alberta. I went to OCAD University in Toronto for my undergrad, where I majored in photography, and then graduated in 2010, and I’ve been [laughs] making work ever since.

Q: You were raised in the arts partly because your father is an artist and curator. How did you choose photography?

A: When I was quite young I knew him as a painter, as an artist. And I was definitely surrounded by art for my whole life and influenced by the lifestyle. He had a studio in the house that I grew up in and he’d be painting there. I’d get to go in and do my own amateur painting—hand printing stuff. He also involved me in a couple of projects so I got to do little drawings in his paintings. I have lots of fond memories like that, but they’re getting a lot more distant now because in elementary school, he started being more focused on curation.

Photography was something that always interested me. I was interested in all the arts, but I definitely remember being very fascinated with cameras and being able to use my parents’ cameras to test my skills. I fell in love with the feeling of closing one eye and looking into the viewfinder and seeing how the world is really transformed.

In university, I also took classes in sculpture which helped me realize I didn’t want to do straight studio or landscape photography. I had a fascination with creating with my hands. And so I think that’s where sculptural aspects got introduced into my work. I also always loved theatre and storytelling which allows for the more cinematic-ish feeling I go for in my work. 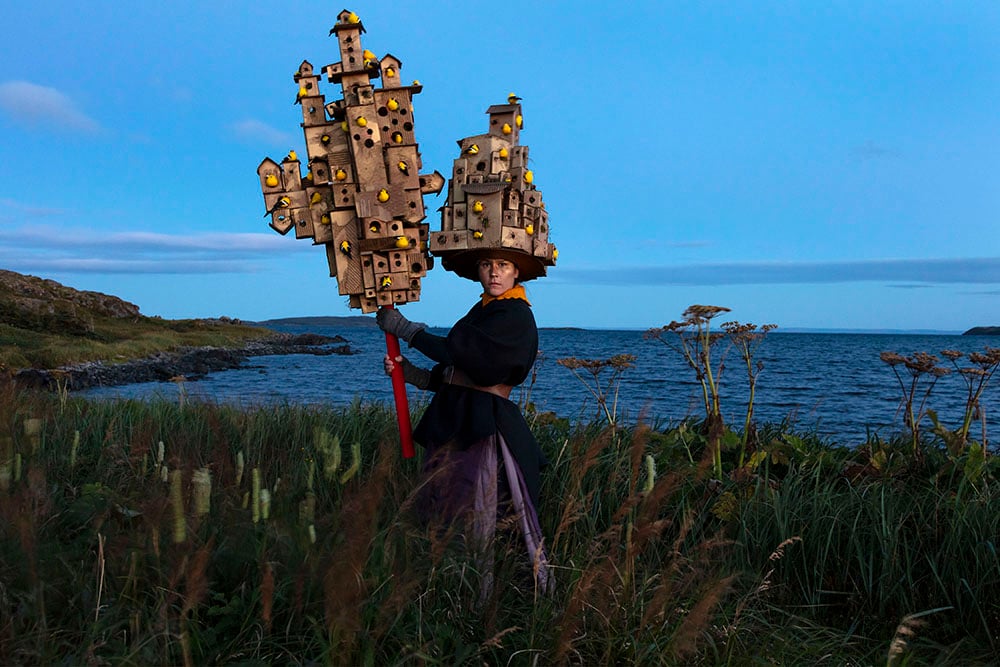 Harbourage For A Song, from the series As Immense as the Sky, 2019, chromogenic print. (Courtesy of Meryl McMaster, Stephen Bulger Gallery and Pierre-François Ouellette art contemporain)

A: Predominantly, my ideas come from a material that I’m looking at or research that I’m doing. Sometimes, it’s a landscape that’s catalogued in my head. Later when I’m thinking of ideas, all these different elements come together. Other times I am listening to radio programs, reading things, and then drawing on my own experience and how I’ve felt in a certain type of landscape or situation.

Q: Let’s talk about In-Between Worlds because there’s a few different materials that you work within each piece. Your piece “Aphoristic Currents” features swirling newspapers, for example.

A: In the series, I was drawing on well-known symbols and how these different symbols represented different parts of my culture— how they could mix creatively in some way. And for “Aphoristic Currents,” these Victorian ruffs on the clothing of royalty came up. Also I had collected articles from different types of newspapers, and there was this newspaper shop near where I lived, and they would always carry, like, The Guardian or newspapers from the UK, the US and Canada. I would keep certain articles, like things going on around the world and—and also within this country. I spiralled the newspaper into an exaggerated ruff by using a piece of foam piece that was six-foot in circumference. I was thinking about written texts and their power to affect the past and present. They represent—rightly or wrongly—our collective identity. That means we’re influenced by each other, and also, our identities are strongly influenced by stories and language.

Q: There’s some really playful ones in that series, like “Horse Dance” or “Wind Play.”

A: “Wind Play” was quite the process to create. I was looking at military hats and the helmet is based on that shape. I had these skinny balloons in my studio that have a fringe like motion when they’re all together. Balloons also have this celebratory meaning to them. I had this vision of dancing, with them and having that movement really be exaggerated within the material. Within a lot of my images, there is also heavy histories. And I think that with “Wind Play,” I wanted there to be that curiosity and freeness to come through with the military reference.

Q: The banning of our culture enforced by the RCMP. 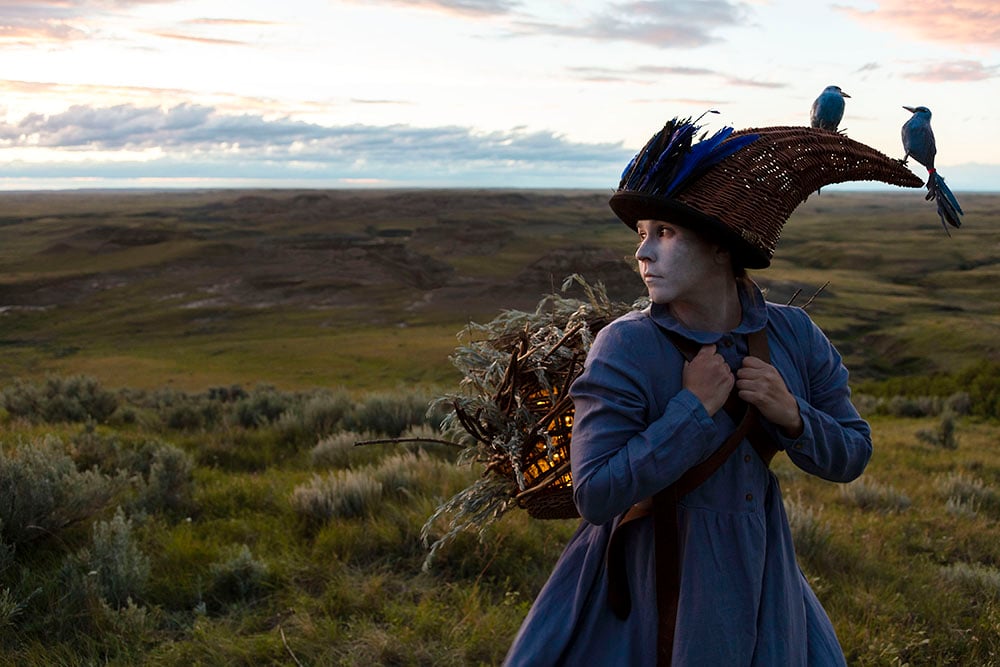 Lead Me to Places I Could Never Find on My Own, from the series As Immense as the Sky, 2019, chromogenic print. (Courtesy of Meryl McMaster, Stephen Bulger Gallery and Pierre-François Ouellette art contemporain)

Q: You can really feel the full motion in “Murmur.”

A: It’s all these paper birds on a wire sculpture. I used North American history books, cutting out several thousand paper birds, like starlings. This idea of murmur is about discontent within our history.
You can read it both ways. You can have me being propelled forward into the present, or you can turn it around, and I’m being turned into the past, going back in time.
I really like to give my images this dreamlike quality or state, and within this “murmuration” you don’t know if the birds are moving me or if I’m moving myself. Again, I’m part of these cultural forces, but yet trying to be an autonomous being outside of them.

Q: Is that why you decided to put yourself in your work? It’s partly because the subject matter is related through you and about you in a way?

A: I was and I still am a pretty shy, introverted person, and didn’t want to ask someone to pose for me. So I thought I’m going to try to do it on my own. However long that takes, and however challenging it’s going to be, I’d for some reason rather go through that challenge than to have someone pose for me. I kept coming back to wanting my voice to be personal in my work so maybe I was really the best person to be the subject of the work. 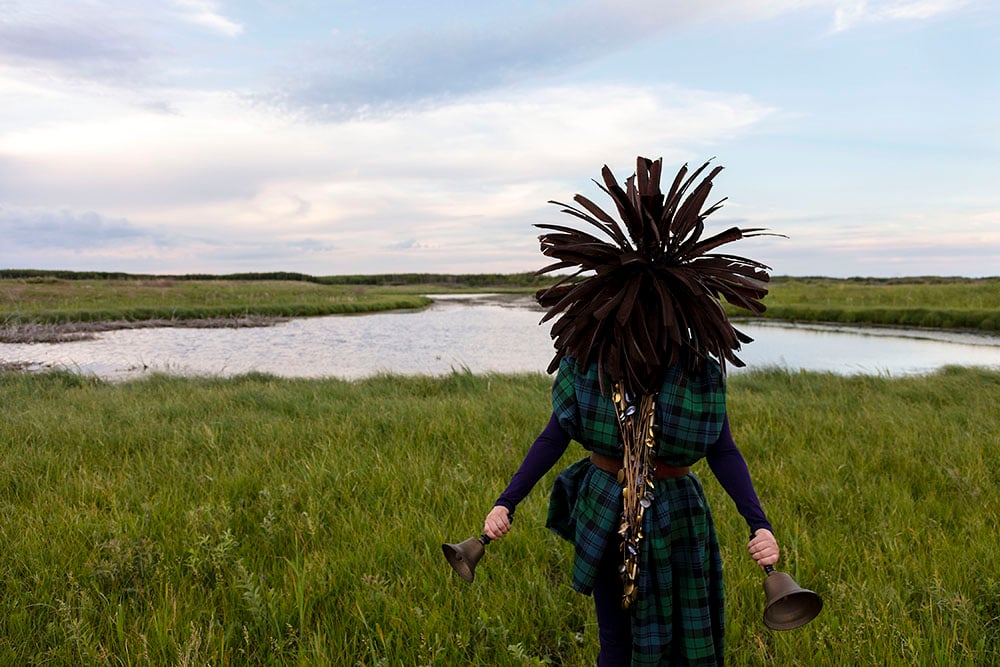 From a Still Unquiet Place, from the series As Immense as the Sky, 2019, chromogenic print. (Courtesy of Meryl McMaster, Stephen Bulger Gallery and Pierre-François Ouellette art contemporain)

Q: It’s interesting because you’re wearing different kinds of costumes and sculptures on your body. It’s self-portraiture and not portraiture at the same time.

A: Oh, totally. All these different images are different theatrical embodiments of different aspects of myself. They are me and not me. And a lot of times I think you want to escape from who you are and you don’t want to face a lot of those hard questions. And I think a lot of times I don’t have it all figured out either. I’m along on the same journey as everyone else.

Q: But you started out early in your career talking about your mixed heritage and how that was influencing some of the questions you were asking. It does lend itself to some of the theatricality of your work. The magic of the work is so much about the fact that things are always either moving or transforming. I’m really drawn to that aspect of your work. Does – are those two things related, do you think?

A: Oh, definitely, this transformational figure is definitely part of the work—part of who I am and who I think we all are. We are transforming every day through the experiences that we have. I like images to be this portal into memory and altered time. I feel like within my images, I create a space for people to have a moment to escape and to go down their own path. But if you want to look further and engage with the different layers within the image, you can go into that storyline deeper if you want.

Q: Birds re-emerge all the time in your work as a reference to flying or things like this. Works like “Avian Wanderer” or “Secret Darkness of Birds.” Where does that come from?

A: I’ve always heard Cree stories about Raven, a cultural hero, and how he puts the sun back into the sky after it was stolen by a man. Birds are messengers, guides and protectors in our stories. I want to think from our relationship to them, how they see from a different vantage point. Through them we can relate to different metaphors within human life and what we should be doing, and seeing things from different perspectives. They remind us what it is to feel free from restriction. In my images you can’t always tell the relationship. Sometimes it looks like the birds are controlling or influencing me.