Remembering Gord Downie through his lyrics

Opinion: Ahead By A Century is a song in which the Hip asks us to shed what holds us back, and to imagine a future that sets us free 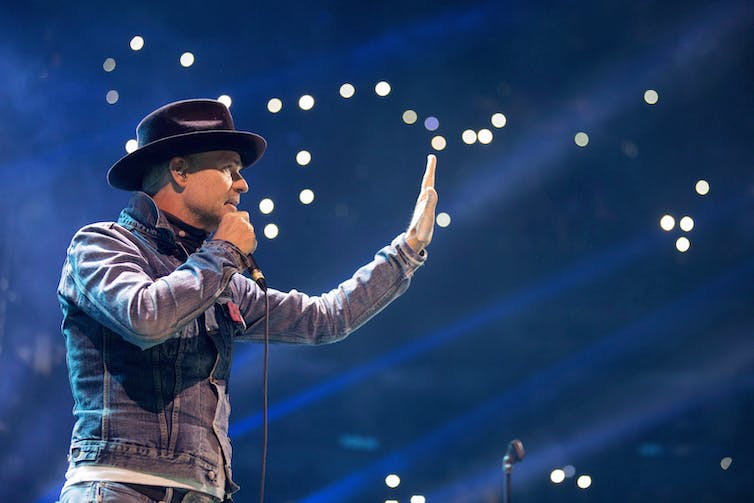 Canada has lost one of its greatest artists—a person who consolidated us, who pushed us, who excited us, who taught us and who inspired us.

We have known for more than a year that Gord Downie was going to leave us soon. But the news of his death today doesn’t soften the blow.

Downie and the Tragically Hip played their last gig in the summer of 2016. The band’s farewell tour came shortly after Downie announced he had been diagnosed with terminal brain cancer. Shows from those exhilarating and emotional performances on the farewell tour were turned into a documentary, Long Time Running, and the last show was televised live across the country.

Downie’s death is a chance to re-examine the lyrics of the Hip’s songs. Good poetry is explosive. It makes us reconsider what we thought we knew, and in some instances it urges us to start again with a different, usually broader, viewpoint. Good songs—as Bob Dylan’s Nobel Laureate reminds us—have a similar impact.

I watched the final show on the big screen in Kingston’s Market Square. I wanted the Hip to play several songs, but none more so than “Ahead by a Century.” It is, I think, their greatest hit, and it was wonderful to hear them perform it as the last song of the show.

Why was it such a fitting way to finish? What about it is explosive? What does it mean to be “ahead by a century?” The song is so rich that there are a variety of good interpretations, but here is one way of thinking about it.

At its most basic level, “Ahead by a Century” is a song with a broad sweep, as it weaves together past, present and future. It is about time, memory, loss, disappointment and desire. But it is also about Canada’s identity and the politics of hope. It is a song in which the Hip asks us to shed what holds us back, and to imagine a future that sets us free.

The opening verse recalls childhood. It begins with the words “First thing,” which immediately captures the excitement children feel when they recount their day. The singer and his friend have played together many times: “First thing we’d climb a tree / And maybe then we’d talk / Or sit silently / And listen to our thoughts.”

Among other things, the two discuss what they will do when they get older, or what they think their future will be like. They have “illusions of someday” that as children cast “a golden light.” But as the rest of the song reveals, their ideas of the future are “illusions.” It will not be as they planned or hoped. Having been back to childhood, and then forward to “someday,” the verse closes with the present and an insistence on living as fully and genuinely as possible: “No dress rehearsal / This is our life.”

In the bridge, the “illusions” of childhood are inevitably and almost accidentally punctured. The voice of the child is again captured when he explains—perhaps to a parent—“that’s where the hornet stung me.” This unexpected and unpleasant experience marks the end of childhood’s “golden light,” and brings on the “feverish dream” of adulthood, where we are all addled by emotions such as “revenge and doubt.”

The final line of the bridge—like the final line of the verse—returns us to the present: “Tonight we smoke them out.” Literally, of course, the “them” in this line refers to the hornets, but it also refers to “revenge and doubt.” The singer plans to use smoke to drive the hornets from their nest, in the same way that he hopes to drive revenge and doubt from himself, in an attempt to return to an earlier time when he lived free of these emotions.

Political agitators were ahead by a century

The chorus is six words—“You are ahead by a century”—repeated three times. The singer is addressing his partner, who is perhaps the same person he climbed trees with as a child. Yet the two are now far apart. He is thinking of the past and struggling in the present. She is living one hundred years into the future. She has broken free of at least some of what thwarts and binds us now.

She is already thinking and behaving in ways that will eventually gain broad political and cultural acceptance, but that are currently deemed unacceptable.

WATCH: Fans in Kingston sing Ahead By A Century

Those early 19th century demonstrators were ahead by a century (and more). They recognized a blatant social injustice and started campaigning against it, but it took one hundred years for the rest of society to catch up.

In 1963, Martin Luther King, Jr.—another Nobel Laureate—spoke powerfully of his “dream that my four little children will one day live in a nation where they will not be judged by the colour of their skin, but by the content of their character.”

Since then, 53 years have passed, and we are nowhere near living up to these words, as the recent bigotry in Charlottesville, Va., makes shatteringly clear. Will we live up to them by 2064, or will we discover—sadly and shamefully—that King was ahead by much more than a century?

A vision of Canada beset with tragedy and injustice

In the second verse, the singer continues to draw together the despair of adulthood (“Stare in the morning shroud”) with the exuberance of childhood (“I tilted your cloud”), before anchoring himself in the present (“Rain falls in real time”), and insisting again on the importance of using our time meaningfully: “No dress rehearsal / This is our life.”

The second bridge runs revealing variations on the first, and deepens the themes already in place: This time it is not “where” but “when the hornet stung me,” and the dream is not “feverish” but “serious.” Then, as the band and the singer build toward the close, the chorus is repeated twice, emphasizing with more and more urgency the distance between the singer and his partner.

The song might have ended with the repetition of the chorus, but the singer has one final thing to say: “And disappointing you is getting me down.” It is his acknowledgement that he wishes he was as far ahead as she is, and perhaps too it hints at her disappointment that he is unable to close the ground between them.

But thinking and feeling as he does, regarding the past as he does, misspending his time as he does, seeing a “morning shroud” instead of a morning sun as he does, he seems trapped while she moves into a far more expansive future.

More broadly, the Hip themselves in many ways invoke the dynamics that are at work within this song. They write about Canadian history, language, peoples, landscapes, and towns, and their sense of who we are, where we’ve been, what we’ve done, and where we need to go is at the crux of their music.

Their vision of Canada is beset by tragedy and injustice, but also lifted by beauty, humour, and courage. Most of all, at their finest, they urge us to rethink the present, and to imagine a more generous and accepting future that should not be ahead of us by a century.

Ahead by a Century lyrics

Or sit silently and listen to our thoughts

With illusions of someday casting a golden light

No dress rehearsal, this is our life

With revenge and doubt, tonight we smoke them out

You are ahead by a century

Stare in the morning shroud and then the day began

I tilted your cloud, you tilted my hand

Rain falls in real time and rain fell through the night

No dress rehearsal, this is our life

With revenge and doubt tonight, we smoked them out

You are ahead by a century

But this is our life and disappointing you getting me down

Ahead by a Century lyrics © Peermusic Publishing

(Editor’s Note: This is an updated version of an article that originally appeared Aug. 17, 2017)

FILED UNDER: Gord Downie The Conversation