The A-lister opens up about the tyranny of happiness, and why he tries to share the celebrity experience with fellow Canadians 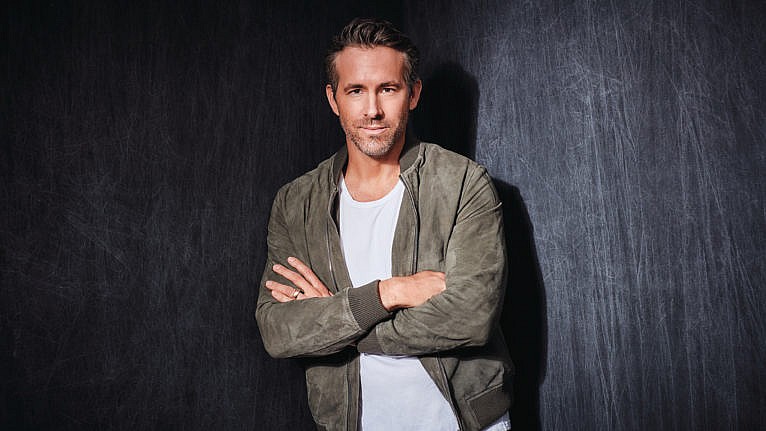 ‘Being born and raised in Canada, I learned at a young age to laugh at myself,’ says Reynolds (Courtesy of Guy Aroch/20th Century Studios)

It’s not possible to dislike Ryan Reynolds. The Deadpool star is perhaps best known for his raunchy, self-aware and slightly immature sense of humour. But while most other celebrities revealed a little too much about themselves during the COVID-19 pandemic—by Instagramming parties on private islands, or complaining about lost opportunities to play the Royal Albert Hall—Reynolds recorded public service announcements for the government of British Columbia, helped to promote SickKids hospital and even helped to recover a precious teddy bear stolen from a Vancouver park.

READ: Ryan Reynolds is the quasi-hero we can all tolerate right now

It was exemplary behaviour from a hometown boy who has established himself within the ranks of the Hollywood elite. Despite living the life of fame in America, Reynolds keeps one foot grounded in Canada, the country he credits with instilling his brand of self-deprecating humour. He also made a show of showing his love for home and native land at a moment when the country was struggling. He spoke with Maclean’s contributing editor Jen Gerson about the pandemic, parenting and why he doesn’t like to hurt people. This interview has been edited for length and clarity.

Q: Let’s start with this: how’s your pandemic going?

A: Wow, yeah, I’m reluctant to personalize it in such a way but, as with anyone who has three young children—or two young children, or one, or a dog—it’s definitely challenging. Lots of Zoom school and that kind of stuff, but we’re really happy that we’re seeing the waning days. It’s feeling great now.

Q: There seems to be an air of relief now that it’s coming to an end.

A: Yeah, that is something that is felt across this country and North America. Hopefully it’s going to continue to get better. The countries that have less access to vaccines, hopefully that will change.

Q: I’ve been poking around with the new movie you have coming out, Free Guy, and it’s a really fun concept for a movie. You’re playing an NPC, which stands for non-player character. NPCs are unmemorable background avatars used to fill out crowd scenes in video games, but this one is a nice guy who realizes he’s a character in a video game, and becomes the hero of the tale. What interested you about that movie?

A: I really love this idea of making a film that is a large, summer blockbuster in scale, but that is also not [pre-existing intellectual property]. It’s not based on anything like a comic book or a sequel or anything like that. It felt exciting to dig into. There’s also an adventure element to it. I grew up watching Amblin movies that [Steven] Spielberg was making and they were real adventures that would take you off to some place that was extremely exciting. And I love wish fulfillment. I’ve always loved that.

Also, just this notion that there are people living in the background: there’s no better personification of that than an NPC—someone who is meant to fill the space in the background, don’t speak up, don’t take action, don’t do anything. Shut up, work, breathe and die. I like the idea of those people stepping into their light. This movie isn’t just about my character stepping into his light. It’s about a whole bunch of NPCs stepping into their light, and that was a lot of fun.

Q: It’s an interesting parallel to the Deadpool character; it’s still an action-adventure, you still have the flashy pyrotechnics and all that, but it’s a much more wholesome character than what we’ve come to expect.

A: He’s technically four years old in the movie, so when he becomes somewhat sentient or realized, he’s almost like a child. In some ways, the character is inspired by Will Ferrell’s Elf. He’s a little like the elf—he’s got this childlike innocence. But when you meet that at the intersection of “fed up”—I’m using less salty language than I’d like to there—it gets really interesting. This movie is one in which I just couldn’t believe the level of talent around me. The actors, the crew, the directors—everyone was just there to make something extremely special.

Q: I want to talk a bit about humour, which is part of your persona and character. This character is not at all raunchy, and is quite the contrast to Deadpool, yet it’s still identifiably a Ryan Reynolds character. There’s something that is inherently wholesome about your humour. If you think about it, there was also something kind of wholesome about the humour of Deadpool; it just happens to be over-the-top raunchy humour at the same time. How did you master this kind of wholesome/not-wholesome comedy dichotomy?

A: I think it’s part of how I was raised. I don’t just mean my parents, I mean being born and raised in Canada and having close ties to Canada. I learned at a young age to laugh at myself. I think self-deprecating humour is something Canadians are well known for all over the world.

And I think you learn from mistakes. When I was a young buck starting out in Hollywood, I made a couple of jokes at the expense of someone else, and I remember noting how that didn’t feel good. Despite the fact that it got a laugh, there was something darkly icky about it, and I made this promise to myself that I wouldn’t do that anymore. I think making that promise really helped me. It taught me to laugh more at myself—to direct that acerbic, vitriolic style of humour at myself. That way, the [total] casualties are one, and they only serve to help me grow as a performer.

I don’t know if I would ever call it wholesome, because I have the mind of an 11-year-old. But I would say it’s definitely not aimed to hurt anyone, and I think that is a tricky tightrope to walk because you still have to be subversive, you still have to provoke because that’s what you hope comedy and performances do. I just don’t love attacking anyone in particular besides Ryan f–king Reynolds.

Q: Was the other person you made fun of Hugh Jackman?

A: No! I don’t mind making fun of somebody if they’re in on it. If they’re not in on it and it’s coming at them in a surprising way that they don’t feel good about, then I don’t feel great about that. Hugh and I have had a decades-long rivalry that I hope will end sometime around 2063.

Q: Who is winning?

A: That’s the default. But it’s combined with, I hope, some empathy and compassion as well to balance things out, I think.

Q: There is something meta and self-aware about your humour, as well, which plays well in the post-COVID era. We’re accustomed to celebrities who a) can’t make fun of themselves and b) don’t seem to be aware of their place in the world and the role they play in it. Those two things don’t describe you, and I think people quite like that about you. There is something culturally Canadian about it, as well. How much of your meta persona is a put-on and how much of it is a genuine reflection of your personality?

A: In real life, if we were to sit down and have a drink in a bar, you might see that I’m a lot more shy than I let on. That’s a bit of a self-defence mechanism, this guy who takes over. I remember every talk show I’ve ever done—even the earlier ones, like David Letterman, standing backstage thinking I’m going to die. And then the curtain opens and this other guy takes over and handles it for me and I’ve always appreciated that.

I think being self-aware and meta all stems from something much more tangible and palpable, which is that I have kids. I don’t know how to parent children. Does anyone? So I read books on how to parent my kids, how to be the best parent I can be. That doesn’t mean being the most-liked parent or the most-beloved parent or their best buddy. It means being the person who is in charge of their safety and well-being.

Back in 2014, I read this thing that talked about how it’s probably best not to strive for happiness for your children, but rather for self-awareness. That really stuck with me. Happiness is a recipe for disappointment; it’s a recipe for evaluation instead of observation. It’s a recipe for kids thinking, “Why am I not happy at this moment?” Instead you want to welcome every feeling: sadness, anger, grief, anxiety, anything that is coming up.

That weirdly applies to show business—and I recognize what a weird leap that analogy is. I try not to wake up each day and think, “I have to be happy” or “I have to be this thing or that thing.” As long as I’m aware of what I’m feeling, I’m in a much better position to deal with those feelings. And weirdly, I translate that to comedy sometimes.

Q: Unlike a lot of people who escape Canada and never look back, you’re still very involved in Canadianness. You’re doing stuff with SickKids. I believe recently you did something on Twitter to bring back a beloved teddy bear stolen from a park. There are all sorts of these stories. You have a foot back in Canada emotionally.

A: I’m very connected to it. I owe a lot of who I am to Canada, and as I’ve gotten older, I look at this amorphous thing called celebrity as something to share, not something to hide in the shadows with.

When I was starting out, the people who were quite famous tended to have a different outlook on celebrity. That it was something to begrudge, or that it was this burden to carry. I just found that it felt really good to share it; I share it with Canada. I like to share power, I like to step aside where necessary. I think all of those things are signs of strength, not weakness. I love where I grew up, I love everything about it. My brothers all live there, my mother lives there.

Q: Is being a celebrity awful?

A: No, no! It is what you make it. Is being anything awful? For me it’s not awful as long as I’m always sharing it. I try to never say no to any video for someone or a hello or anything—even a peek behind the curtain makes it more normal for me.

I’m not saying it’s all puppy dogs and ice cream, but I would be a fool to look down at it. It’s given me amazing life adventures that I might not otherwise have experienced. I want to take as many people on that adventure and that ride with me as possible because otherwise it’s pretty dull and pretty isolating.

Q: It sounds like a lot of work, though. It sounds exhausting.

A: It’s not if you’re not premeditating it. If you’re just waking up in the morning open to possibility, and open to anything that might come as a result of that, it’s not exhausting at all.

This interview appears in print in the August 2021 issue of Maclean’s magazine with the headline, “Ryan Reynolds and the joy of meta-Stardom.” Subscribe to the monthly print magazine here.