Salami by the light of the crescent moon

For a few dedicated gastronomes, meat must be cured in harmony with lunar cycles 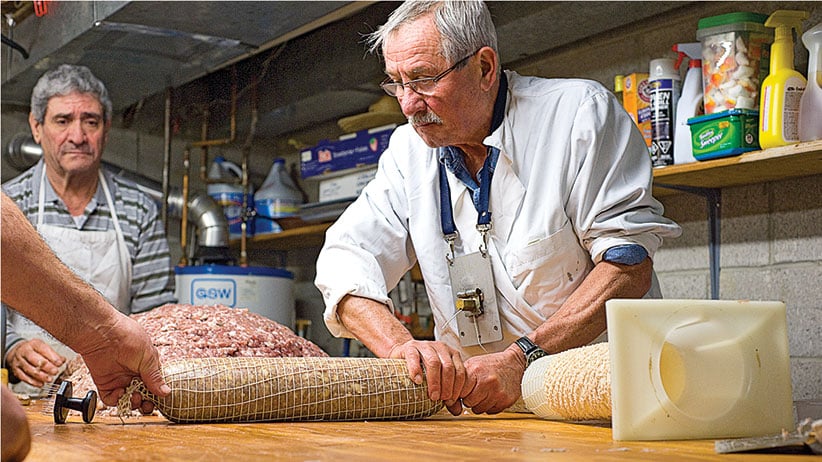 Every year, when the cold in Toronto levels off to a late-January sting and the moon begins to wane, Nilo Palu drives his polished gunmetal truck to a nearby slaughterhouse and hauls two butchered pigs (some 500 lb. of pork) back to his basement. He lays the mountain of meat on a wooden table near the taxidermic animals he captured on various hunting trips. Then, with a group of friends, Palu carries out an ancient tradition he has practised since his boyhood in Italy.

For these sixty- and seventysomething Italian Canadians, slaughtered pig can only become prosciutto and salami during the luna calante, after the full moon, when the silver orb recedes into the black sky. “If we don’t cure by the moon,” Palu explains with a furrowed brow, “the meat could go bad.”

Planting a garden or making wine according to the lunar cycle—the principle of biodynamics—is well documented. The movement was initiated in the early 20th century by Austrian philosopher Rudolf Steiner, who suggested that crops should be grown organically, in harmony with the stars and planets. Before Steiner, farmers followed moon lore, and still do. (See the Farmer’s Almanac.)

But lunar curing? Experts in the world’s gastronomic capitals appeared to know nothing of the practice. “I’m afraid I’m stumped on this one,” said a New York University food studies professor. Harold McGee, the Curious Cook and author of On Food and Cooking: The Science and Lore of the Kitchen, also said he’d never heard of cosmic charcuterie. The Slow Food Movement folks were similarly perplexed, as were anthropologists and food historians at the famed University of Gastronomic Sciences in northern Italy. Paolo Cornale, an academic who teaches animal production at the school, even investigated on our behalf. “I spoke with 10 people, experts and meat producers,” he reported. “To be honest, many of them have never even heard of the moon’s influence on meat production.”

Still, the moon guided Palu’s annual ritual, passed down through the generations. Growing up in Friuli, he recalls holding the leg of a pig, with three other men, as it was being slaughtered. This would happen every winter when temperatures dropped and “the moon was going down, to the new moon,” the calo di luna. If they didn’t dress the hog then, the puciter, or pig master, who helped local families turn their pigs into prosciutto, warned the meat would simply turn black. 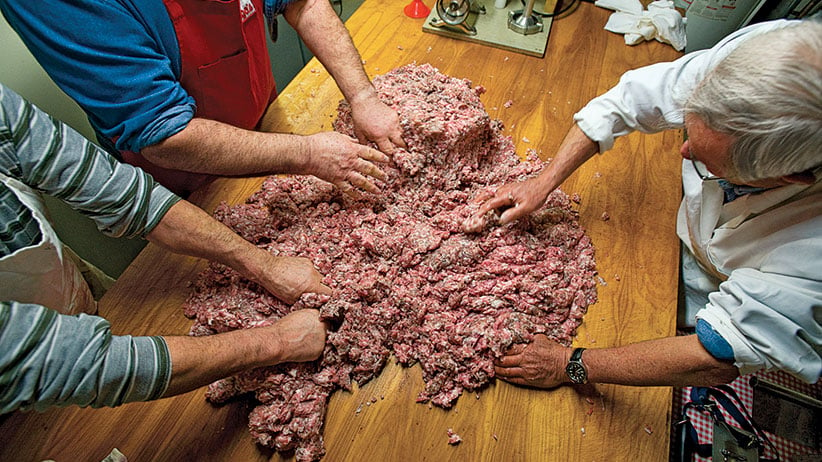 Years later, Palu still considers the cosmos when he cures meat. “The moon could change everything,” he shrugs, “it could change nothing. But we follow it.” Maybe this wisdom was passed down from Pliny the Elder, the first-century Roman naturalist who wrote about the moon in his Natural History. One 1918 journal article reports Pliny believed “boars, bullocks, rams, and kids should be castrated during the waning moon” and “goat’s meat, salt-cured when the moon was waning, was not attacked by worms.” Accordingly, Roman farmers followed at least one lunar principle: “Whatsoever you would have grow or increase, attend to during the waxing moon; whatsoever you wish to dry, or cure, or decrease without decay, attend to during the waning moon.”

Turns out this meat and moon lore trickled down to at least one other Italian Canadian. “Naturalmente!” exclaims Gabriele Paganelli, of lunar curing. The robust restaurateur, who processes two pigs per week at his Toronto osteria Romagna Mia, says, “Back in the old country, this is how we did things.”

Paganelli hails from Emilia-Romagna, a region in northeastern Italy known as the country’s epicurean capital and just south of Friuli, Palu’s home. “A long time ago, the only calendar we had in Italy was the moon.” Pregnant women, for example, knew they were due after nine full moons had passed.

Echoing Pliny, Paganelli’s family believed that drying and curing without spoiling the food had to happen by the waning moon. Conversely, “Things that needed to grow, to flower”—such as a budding head of radicchio—”were done at the luna crescente [the waxing moon],” he says. Does he use this technique now? “No,” he laughs. “We needed the moon then. Now we have refrigerators.”