From the Grammys to Cold Specks, Canada is in an R & B moment

Why Canadians are going abroad for international recognition 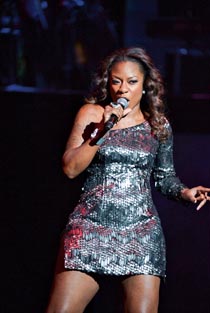 Becoming an expat did wonders for Al Spx’s career. When the 24-year-old Toronto native—who performs as Cold Specks—realized her self-described brand of “doom soul” would be tough to launch in Canada’s Nickelback-and-Bieber-dominated music market, she took the advice of producer Jim Anderson and headed out of the country. His instinct was spot-on. After Spx took her bluesy, gospel-tinged tracks—some of which have been compared to Mahalia Jackson’s majestic body of work—across the pond, fame followed. In 2011, after her single Holland dropped, she was invited to sing on Later . . . with Jools Holland, a popular music TV show in the U.K. After her performance, artists on the show such as Mary J. Blige, Pete Townshend and Florence Welch tracked her down backstage. They became her first fans—a following that has grown into cult-like proportions overseas.

“Those U.K. audiences kept us going and made it happen for us,” explains Spx via phone after a sold-out show in Germany. (Spx is not her actual name; she keeps that to herself.) Her debut album, I Predict A Graceful Expulsion, followed, released in her home country by Feist’s label, Arts and Crafts, and outside Canada by the adventurous Mute Records label. Her stardom subsequently spread throughout Europe, where she’s shared the bill at music festivals with the likes of Björk and Bruce Springsteen. Last summer she was shortlisted for the Polaris Prize. “I had to leave the country to get recognized internationally,” she says—and so that she would be recognized back home.

The crux of the problem: Cold Specks is a rare talent in a country not known for breaking alt-soul stars. Canada only houses a handful of radio stations that regularly include rhythm and blues in their playlists, and many of our labels stray from signing R & B and soul artists at all. In fact, while Cold Specks was getting a surge abroad, winning flattering reviews in NME and the London Times, Canadian radio stations gave her singles the cold shoulder. Perhaps that’s not surprising—her music owes more to Sister Rosetta Tharpe and Alan Lomax’s field recordings than to mainstream R & B. “Luckily I don’t listen to much Canadian radio that much. It’s all crap, isn’t it?” she says, laughing. But there are countless singer-songwriters in the same boat all over Canada, she says.

Divine Brown knows something about that. “There’s no reason why there shouldn’t be something in the books called the Canadian R & B invasion,” says the 38-year-old R & B singer. “We’ve got Whitney Houstons and Mary J. Bliges of our own on this side of the border,” she says. A singer with a stunning five-octave range, the Toronto-based Brown is currently recording her third album of soul and R & B, titled Something Fresh. Unlike Cold Specks’ cerebral, moody tracks, Brown’s music mixes ’90s soul, pop balladry and upbeat, contemporary R & B. She says her new disc, due to launch in May, is an antidote to what is currently inundating the charts. “I’m thinking that people are ready for something organic now because there is so much electro and dance on the market.”

You wouldn’t know it from the industry reception for her current single, Gone. Brown’s biggest challenge has been getting radio programmers to embrace homegrown soul. “[They] just need to open up their minds and take a risk. It is so frustrating when a soulful song like Adele’s Someone Like You gets an insane amount of play and then when you bring your own soul to them, certain radio stations claim that your music doesn’t fit into their format. Or they say there isn’t enough of a demographic for it.”

Brown is right: Canada is actually in the midst of an R & B moment, whether we realize it or not. At the other end of the spectrum from Cold Specks, two Canadian singers who specialize in more pop, hip hop and chart-driven R & B, were named Grammy nominees this year. Melanie Fiona, who garnered great attention last year with Grammy wins for best traditional R & B performance and best R & B song for a duet with Cee-Lo Green called Fool For You, has been nominated again this year for best traditional R & B performance for a song called Wrong Side Of A Love Song, from her sophomore disc, The MF Life. And Tamia Hill’s fourth disc and title track, Beautiful Surprise, have been selected as frontrunners for best R & B album and R & B song of the year.

That makes Hill the first Canadian female vocalist in history to have been nominated for best R & B album. Although many assume veteran soul diva Deborah Cox took that honour years ago with her bestselling disc of 1998, One Wish, Cox has never been nominated in either category—despite having major chart hits, including Nobody’s Supposed To Be Here, which held an eight-year record for the longest-running No. 1 single on Billboard’s Hot R & B/Hip Hop chart.

“I have no idea what took so long in this category,” says Hill, a native of Windsor, Ont., via phone from her home in Arizona (she typically records in L.A.). “Actually, wait,” she says, correcting herself, “I do have an idea. A big one.”

Hill’s fans were perplexed when the Recording Academy did not acknowledge Hill’s breakout hit of 2000, Stranger In My House. The song was an R & B juggernaut, receiving heaps of video play on BET, MTV and MuchMusic (back when they played videos), club play via remixes, and as much radio play as Toni Braxton and Erykah Badu’s hits. She already had Grammy nominations, in 1997 and 2000, connected to projects with artists such as Quincy Jones, Chaka Khan, Gladys Knight and Brandy.

“At that time, if you were with a big label, there were a lot of backstage deals that happened that got certain artists into awards show nominations,” Hill says. She was signed to a big label, the Warner-owned Elektra Records, but “I didn’t feel like I was the label’s priority at all,” she says.

Ultimately Hill decided to go indie with her own label—rare for an artist who wasn’t hanging out with the likes of Broken Social Scene or Arcade Fire. “I’m not a big machine. I’m the little engine that could, and working with like-minded people gave me tenacity,” she says. “I went around the world with Quincy, and he would tell me stories about how they would go to Europe and he and his singers would have to go through the kitchen to get to the stage. Those stories stayed with me.”

Although Hill was diagnosed with multiple sclerosis in 2003 and had her hands full raising two daughters from her long-standing marriage to NBA basketball player Grant Hill, she kept honing her craft. Her persistence paid off when 2012’s Beautiful Surprise got Grammy attention. “I thought it was a joke when my manager phoned me to tell me,” she says. “But I hope this brings change for Canada—we definitely need it. I would love to come home and do a huge show and support R & B with Deborah and Melanie Fiona and other Canadian female R & B vocalists—we need the opportunity to survive. The reality is, a lot of people have to come to the States for that opportunity.”

It’s different in places like South Africa, she explains, noting that she was pushed to release a greatest hits album in 2009 solely for her demanding South African fan base. Hill recalls having to send someone out to buy her self-titled debut from 1997 when she toured there. “I forgot the words to some of my old songs and the fans are so into them there that they wanted me to sing my whole first album as if they were all No. 1 hits!”

Melanie Fiona says her stateside success is partially due to the connections she’s made. Co-managed by Jay-Z’s Roc Nation imprint, she splits her time between Toronto and New York and has written for Rihanna and Drake, toured with Kanye West and recorded and performed live with John Legend. “Drake is putting us on the map for rap and hip hop,” says the Guyanese-Canadian. “I want to put us on the map for R & B and soul.”

“Canadian divas have to work two times as hard as everyone else to get noticed,” says Toronto-based singer-songwriter Jully Black. Currently in the midst of recording her fourth album, (8)IGHT, the three-time Juno winner is in the throes of negotiating with a Brazilian record label in hopes of getting some international attention of her own. Black notes that her upcoming tracks swing between soul, dance and “a New Motown energy.” “If Etta James and Tina Turner had a baby, it would pop out as Jully Black,” she says. With any luck, Black will benefit from the success of compatriots like Cold Specks, Hill and Melanie Fiona. “I know the moment for me to go global is now,” says the eternal optimist. “All signs say go.”