Spielberg’s go-to guy for gravitas takes on The BFG 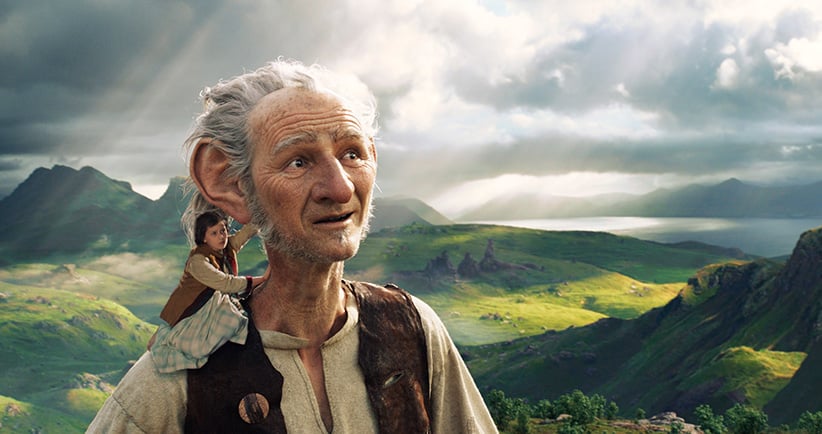 A still from the BFG. The BFG’s voice is by Mark Rylance. (Walt Disney/Everett Collection)

The man in the straw hat stands on the balcony of a penthouse suite of the Carlton hotel in Cannes, gazing at a blue panorama littered with luxury yachts. None is as big as the boat anchored up the coast, the one belonging to his new best friend, Steven Spielberg.

Not that he would ever mention that. Mark Rylance may be on top of the world, but like so many British actors who learned their manners in theatre, he wears his fame with a modest flair—the way he wears his hat, the brim tipped up at a sunny angle above a broad forehead and squinting smile. Rylance is rarely seen in public without a hat. And as we step inside for an interview before last month’s Cannes premiere of The BFG, Spielberg’s film of Roald Dahl’s classic fable, the hat stays on. It signals there’s a carefree spirit behind the man with the long, worried face who has become Spielberg’s go-to guy for gravitas. After winning an Oscar for his mesmerizing performance as Rudolf Abel in Bridge of Spies, he now plays an angst-ridden friendly giant in The BFG, and will star in two more of Spielberg’s upcoming films.

No Hollywood bromance has endured a more epic courtship. It began 30 years ago, when Rylance met the director and spurned his offer to play a small part in Empire of the Sun. The actor, then 26, was coming off his first movie, Hearts of Fire, shot with Bob Dylan in Toronto. “I’d made it because I wanted to meet Dylan, who was a hero of mine,” he says. “But I almost gave up acting. Not because of Bob—Bob was fantastic—it was just the whole environment of the film.” Rylance eventually accepted a larger role in Empire of the Sun, until he was asked to perform a season with London’s National Theatre. “It was a very difficult decision,” he recalls, “Steven said: ‘I need to know in four hours.’ ” Rylance made up his mind by tossing coins and consulting the I Ching. “It said if you take the theatre job, it will lead to community. So I took the theatre job and met my wife [composer Claire van Kampen], and it did lead to a community.”

Rylance went on to forge a brilliant stage career, racking up three Tony Awards, while his eclectic film and TV roles ranged from a bout of unsimulated sex in Intimacy (2001) to a tour de force as Thomas Cromwell in the BBC miniseries Wolf Hall (2015). Now he’s found a second home with Spielberg. “Of all the films I’ve made,” he says, “Steven’s set has the greatest sense of community, the Jewish sense of family. His director’s seat doesn’t have ‘Director’ written on it. It has ‘Dad.’ ”

Now fast friends, Rylance and Spielberg seem an odd couple. One is known in Britain as a hippie pagan and anti-war activist, the other is a Hollywood titan with a thing for heroic war movies. And the actor who Al Pacino said “speaks Shakespeare as if it was written for him the night before” may seem overqualified to play a 24-foot computer-generated giant. But Rylance felt on familiar turf in a motion-capture studio. “Acting in theatre rehearsal rooms where there is no set is very similar to acting in a motion-capture volume,” he says. “Steven sat within a few feet of us, because there’s no camera. Just the dynamic between you and the other actors.” He found an unlikely inspiration for his performance as the BFG: his wife’s previous husband, now his friend, architect Chris van Kampen. “The BFG runs at great speed, literally flying,” says the actor, “and Chris is a runner, a beautiful runner. But when he walks, his arms and legs swing like this . . . ” Rylance strides across the room with an odd, clumping gait, walking the walk he created for his ungainly giant.

Rylance’s transformation from the soft-spoken, almost inert Russian in Bridge of Spies came as a revelation to Spielberg. “To see Mark go from the tight-lipped, close-to-the-vest Rudolf Abel to the expansive and generous BFG,” he told Maclean’s, “was one of the most astonishing experiences in my entire career.” In two upcoming movies, The Kidnapping of Edgardo Morata and Ready Player One, Spieberg will direct his new BFF as a 19th-century pope, then a video-game mogul circa 2044. Now that all the world’s his stage, Rylance seems to have no trouble changing hats.