How does Amy Schumer get away with it?

In comedy, good intentions can only get you so far. 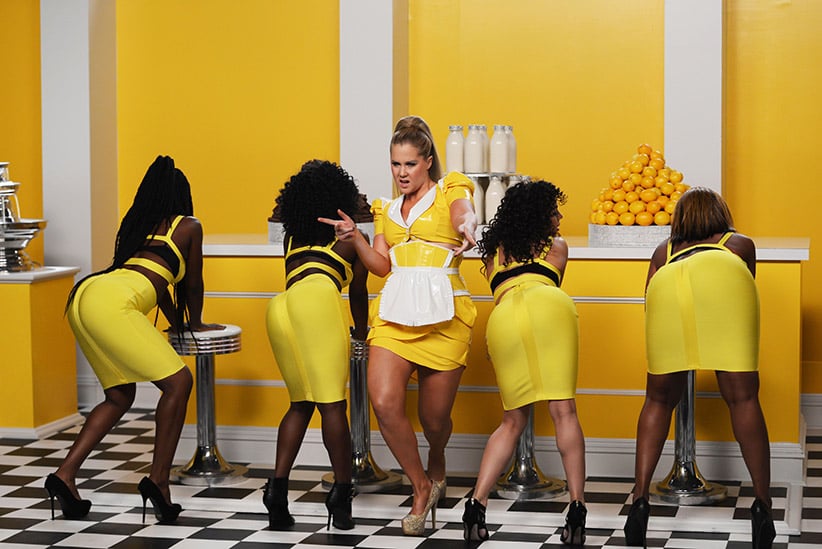 Amy Schumer may have figured out how to do something that was once considered impossible: politically correct comedy. The current season of Inside Amy Schumer has turned the show into a light-hearted weekly attack on patriarchy and misogyny. And it’s turned the comic—who will appear in Canada this June as part of a stand-up tour to promote her new film, Trainwreck (written by Schumer and directed by Judd Apatow)—into a political media icon: “Through funny and frank appraisals of everyday sexism,” wrote Inkoo Kang in The Village Voice, “Schumer has become comedy’s latest truth-teller.” But Schumer is still a comedian first and a truth-teller second—and that may be an even greater achievement than the social commentary.

Schumer has always incorporated feminist content in her work, but this season, she and her writers have woven these themes into most sketches, from a commercial making fun of restrictions on birth control to an episode-long segment where an all-male jury debates whether Schumer is sexy enough to be on television. Much of the praise the show receives now is for its attitudes: the website Talking Points Memo ran a story titled “This is the right way to joke about rape,” about a Schumer sketch, contrasting her work with a Saturday Night Live sketch that “punched down.”

The show also goes beyond the generic liberalism of Hollywood to more radical satire. One of the most popular sketches this season was a Friday Night Lights parody (“Football Town Nights”) with Josh Charles as a school coach with a “clear eyes, full hearts, don’t rape” policy: it ended by implying that sports are inherently part of rape culture, as Charles tells his students that football “isn’t about rape, it’s about violently dominating anyone that stands between you and what you want!” Sexists may be an easy target, but few comedians would take on anything as sacred as football.

Yet even as Schumer has become a cultural heroine, whose sketches are praised the next day on sites like Gawker and Salon, she’s mostly managed to avoid the accusations of preachiness that dog other politically engaged comics, like John Oliver or Jon Stewart. Many comedians argue that comedy isn’t good if it’s not willing to be politically incorrect: Chris Rock declared earlier this year that he’d stopped performing for college students because of “their social views and their willingness not to offend anybody.” But Schumer’s show shares those social views, and has managed to avoid tipping over into didacticism. At this year’s Tribeca Film Festival, Schumer said that she considered ending the Friday Night Lights sketch with statistics about real-life campus rape, but cut them because that made the scene too heavy-handed. “Our hope is that people will laugh at that,” she explained, “and then maybe something will get in there and actually help the culture.”

It may help that Schumer rarely plays the truth-teller role within her own sketches; she usually plays clueless people. In “Football Town Nights,” she takes the part of the coach’s wife, who drinks wine from increasingly huge glasses and advises her husband not to push so hard on his anti-rape crusade. In scenes where she interviews real-life people, she asks deliberately idiotic questions, like asking transgender porn actress Bailey Jay, “Did you ever think about snipping off your penis?” She may be trying to educate us, but she doesn’t portray herself as better than we are, the way some political comics do.

If there’s no backlash against Schumer now, that doesn’t mean there will never be one. Before this season of Inside Amy Schumer, Louis C.K. was the comedian most often praised for his insight, but that’s cooled off since his jokes about racism and child molestation on this season’s Saturday Night Live. Now that Schumer’s proﬁle is increasing, there may be more opportunities for her to upset people, even people who are on her side. There was already a hint of this after the interview with Jay, which Slate’s J. Bryan Lowder criticized for “encouraging transphobic misconceptions.” Schumer said at Tribeca that her team is never worried about dealing with contentious subjects “because we know we have good intentions.” But in comedy, good intentions can only get you so far.

The Thrill pop-culture podcast spoke to comedian Diana Bailey to discuss Inside Amy Schumer and the realities of being a woman in comedy: