The cast's costumes are ever-evolving, on set and off

In an episode that screams “set up for future dramas,” I found myself drifting away from the plot–oh, why was Lady Sybil talking in code on the phone?–to look at the clothes worn by the characters.  If Highclere Castle, the real Downton Abbey, is considered a leading character for its sheer beauty and imposing grandeur, then the clothes deserve equal billing.

And ever-evolving. While Season 1 featured restrictive pre-First World War costumes–long dresses, elaborate designs and tightly bound construction–and Season 2 highlighted utilitarian wartime clothing, Season 3 is back to full-on luxury. Reflecting, but not mimicking the era, the fashion is that of fluid silks, sinuous satins and light wool crepes. Everything flows and gathers. Waistlines are loose and hemlines are inching up. (Check out this Pinterest page by Simone James featuring Downton characters.) Sure, some have been used on other period dramas. This isn’t a big budget Hollywood movie but a TV production. Yet no one can accuse them of skimping when it counts. Lady Mary’s wedding dress was exquisite, made by hand and carried a $6,000 price tag.

The costumes are such a big attraction for female viewers that they’ve crossed over into current fashion. Strip away the extreme runway looks and Louis Vuitton’s fall 2012 collection appears to be a 21st century version of Downton. The interest isn’t just in big name couturiers. Michelle Forrest, a fabulous fashion blogger from Australia, has a Pinterest page stuffed with old costumes and new variations that can be bought in stores right now in every price point. 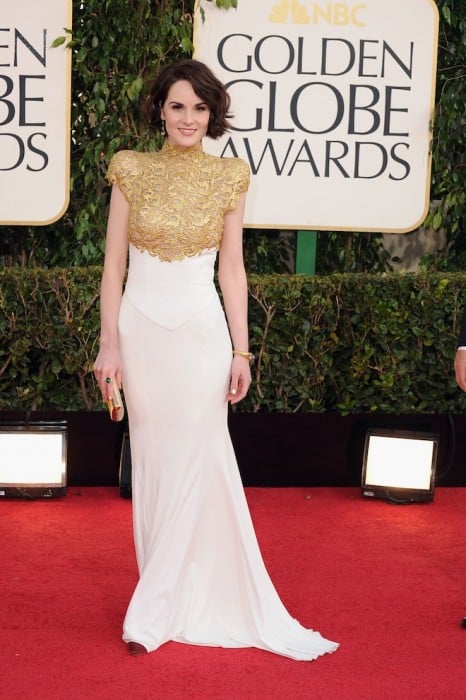 And then there’s Ralph Lauren, who’s made his name, and fortune, by recasting British aristocratic fashion tastes for a mass international market. His fall 2012 collection screamed “Crawley family fashion.” He’s gone one step beyond the Louis Vuittons of the world and is now sponsoring PBS’s Masterpiece, the co-producer and co-financer of Downton Abbey. The fashion designer, as PBS says, “has always had a true appreciation for the heritage and romance of England” and its “timeless character and refined elegance.”

This current craze for all things Downton may be intense but it’s not new. Carole Tanenbaum knows all about it. Her fine costume jewellery retail operation–she’s got a website, Carole Tanenbaum Vintage Collection and is sold in some 40 retail stores–sees a sharp uptick in traffic every time a new season of Downton is aired. This year, she says, “a lot of people are asking for crystal Chicklet necklaces and frail feminine necklaces,” like those seen this season on the Crawley women.

Ironically, while designers are falling over themselves to create Downton fashions, the stars themselves are adopting an increasingly modern style of their own. Michelle Dockery (Lady Mary) and Laura Carmichael (Lady Edith) graced the Mulberry show sporting au courant footwear–leopard spot pumps and high-heeled booties respectively. That was nothing compared to Dockery’s jaw dropping Alexandre Vauthier gown that she wore to the Golden Globes. It’s a good thing the hidebound traditionalist earl of Grantham wasn’t around to witness that “shocking” display.