Ellen Page on 'Gaycation' and the privilege of travel

On VICELAND's 'Gaycation,' Ellen Page and Ian Daniel travel the world to take the temperature of gay culture 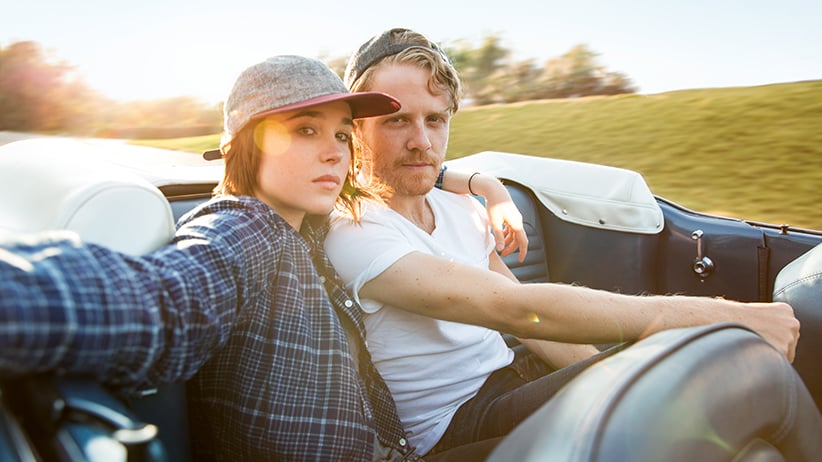 On Valentine’s Day 2014, Ellen Page—the Oscar-nominated Halifax actor best known for roles in Juno, the X-Men franchise and Whip It—came out as gay at a conference for Human Rights Campaign, the largest LGBT civil rights advocacy group in the U.S. The fact that her coming out was a political act presaged the next two years, as she’s taken on Ted Cruz and spoken candidly on LGBT and environmental issues.

Her latest project, Gaycation, feels like a logical endeavour. The show, airing Wednesdays on Vice’s new Viceland channel, follows Page and her best friend, filmmaker and gay man Ian Daniel, as they travel the world. But this is not a frolicking resort-front travelogue; Page and Daniel seek out the reality of countries like Japan and Brazil, looking to unearth what it is really like to be gay in the world. Maclean’s spoke to Page and Daniel about the show and the challenges making it.

Q: Gaycation as a name feels like a bit of a red herring, because it can conjure ideas of escape and frivolity—but it’s not really a vacation at all. In the first few episodes, you both put yourselves into a situation that is emotionally fraught and hard, from witnessing a Japanese man’s coming out, to confronting a former police officer in Brazil who has allegedly targeted and killed gay people. Was that something you committed to, from the show’s outset?

Page: That was really the main reason for making the show, but that being said, the idea behind it did come out of my love for travel shows. I loved them as a little kid and I loved Anthony Bourdain, but I really did want to see one about LGBTQ communities and culture and the specific country that we visit. Of course it is about the joys and the triumphs and the nightlife, but sadly, unfortunately, it’s also about the discrimination that people face, because that’s the reality. I think the name came out of the fact that a lot of people just don’t know—they don’t know what so many people face around the world or even in their own country, where there’s a variety of experience, and despite the incredible progress we’ve seen, that progress hasn’t necessarily reached everyone. I wanted to kind of have this title to have you be open to the experience, and then you enter it and you do see the realities.

Q: It’s also something of an anti-travel show, in the sense that travel shows tend to highlight those joys and showcase the best of places. But if I were gay, I may actually think twice about going to some of these places.

Page: That’s a great point, and it will all depend on the viewer, but if you are a LGBTQ person, if you’re going to travel somewhere, you do need to be mindful of where you’re going, particularly depending on the country. That’s just something unfortunately you need to think about. It’s something you need to think about if you’re a woman, it’s something to think about particularly if you’re a trans woman, and the problems a lot of trans people face when they’re travelling. Unfortunately. I wish it wasn’t the case. I wish it was, “Oh, we’re here!” I wish transphobia, biphobia, homophobia didn’t exist, and I wish that’s what the show could just be, but sadly that’s not the situation around the world.

Q: Though this is an LGBTQ travel show, there are vast differences in experiences on that spectrum. For instance, there are fewer spaces generally for lesbians than there are for gay men. Since you two are travelling together, what differences have you noticed between what’s available for gay men versus gay women?

Ian Daniel: Travel in general is just harder on some people who are LGTBQ than others. I think trans people, for example—there’s more scrutiny at TSA checkpoints. So there’s a fear even entering that space. So I think there’s a privilege to even travel, and how difficult it is for so many other people. I’m only able to think of my own experiences as a gay white man, and I do understand that I have a level of privilege that other people in the LGBTQ world don’t have. There are also just places where there are more bars for gay men than there are for lesbians, and I would say that’s probably the case for America as well, and in Japan. A lot of bars are catered to the gay male experience.

And then I’m travelling with a gay woman, and so I think Ellen’s experience maybe isn’t totally different, but we try to reflect that on the show, the differences that do exist.

Page: Well, first we need to say: Look, we’re having an unusual experience because we’re going with cameras and local producers and we get access to spaces, so it’ll be different from if you’re going as a tourist. So I guess I notice things as a woman just in the way I’m spoken to, or the way people relate to Ian in an interview versus myself, and the way things are explained to me versus the way they’re explained to Ian, which is a dynamic that would pop up in my life in lots of ways.

Q: Do you feel a pressure to be an advocate in your creative works?

Daniel: Pressure sometimes feels like a negative word to me; I think it feels like a responsibility to make it an empowered thing, and it just truly does. We come from a gay perspective, and the show is called Gaycation, and the experience is really about the LGBTQ experience around the world. So I don’t know if you could avoid that responsibility, I think that’d be a really irresponsible, bad show. I wouldn’t have called myself an activist or really an LGBTQ advocate. I can only speak to my own experience, and I think I was potentially naive about what other people go through, so doing this show you clearly become an advocate. Through listening to all these stories, I feel very fortunate to be part of the experience and that people are so willing to share their stories even when it’s so risky to do so, so you just feel an utter responsibility to represent their stories in the right way. You definitely want the LGBTQ community that watches it to feel like you’re being respectful not just of the people you’re talking to, but representing the community as a whole. I do feel more empowered to speak up when the time is right, and I’m on a show where I have a voice to do that.

Page: Yeah, the word responsibility is right, and doing everything you can to educate yourself and learn and be aware.

Q: But as a public figure do you feel the responsibility to be an advocate?

Page: I’m passionate about these issues, and honestly, I feel so lucky to have the opportunity to make the show, and that it is in alignment with what I’m interested in, with what I read about. For me, it just felt like an organic step—of course, I’m thinking I want a show that allows for more representation for the community and shows the struggles people face, especially when we’re hearing all this political rhetoric—to have a way to show how much this affects people lives. How it’s not just a sound bite, and see how it really manifests in our society, and if you’re a person who perpetuates discrimination and inequality, that’s just wrong and there are consequences to that.

But for me, it’s just sincere—it is what I’m creatively interested in. Spike [Jonze, president of Viceland] was like, “Do you have an idea?” I said, “Yeah I do!” And I feel lucky that Viceland wanted to make it, and I’m producing more than one film with LGBT characters and stories and it’s because it’s what I’m interested in. I’m not going to read a script and say, ‘They’re not gay, I’m not going to do it,’ but I am interested in playing more gay people, because I’ve only played one gay person, and I’ve done a fair amount of movies, and I am interested in those stories. So for me, there’s no should-I-or-shouldn’t-I. It all feels natural. 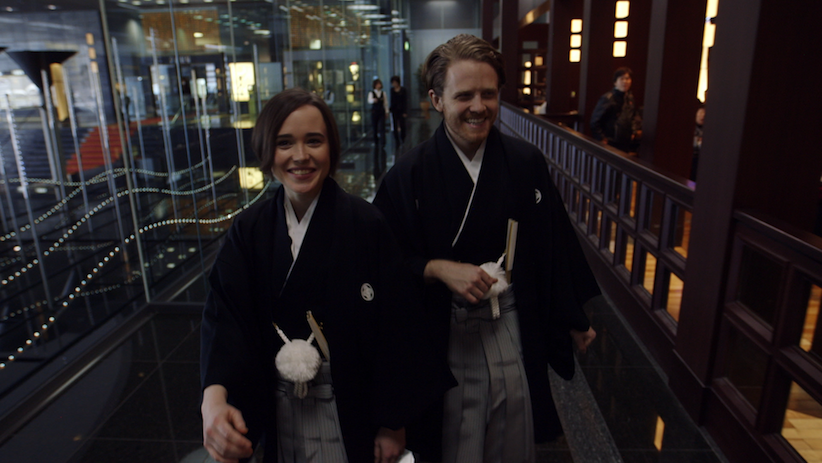 Ellen Page and Ian Daniel in a promotional still from the VICELAND show ‘GAYCATION.’

Q: Ian, you mentioned you felt naive going into this. Can you expand on that?

Daniel: I was reflecting on: what does it mean to be on camera, what does it mean to be in the public eye, and a gay man on the public eye? And just personally—you know, where am I at on my conversation with my family and my friends. I was an out gay man, but with this, I’m really out, right—there’s no question anymore. So thought about what that meant for me, and I thought, okay cool, this is the next step in my life, and an idea I believe in. But then you think about the responsibility, about the issues, it’s not just going to be about who’s sexy at a bar and what bar is fun to go to, it’s going to be about oppression and human rights and humanity in general. I’m just reflecting about how much I had to learn. I’ve gone to these countries and I understand my limitations about what I know, about, for instance, the transgender experience—I have a lot to learn about what people are facing on the daily, and so I read a lot about that. I also think I was naive about LGBTQ history in our own country.

Q: I think every travel show has the same problem, which is that you have to reduce a country down to however many minutes the show is, and doing so for the audience who’s watching—generally a North American one. That kind of essentializing might be even harder to avoid here on Gaycation, because you are bringing the lens of what things are like in North America and necessarily comparing them. There was a conversation you had with the dancehall artist Beenie Man about this when you went to Jamaica—where he really railed against that idea of culture vs. progress. How do you reconcile that?

Page: It’s just something we’re talking about and thinking about all the time, reflecting on our privilege—the privilege of what it means even be able to travel. So I think in that moment—and I understand what he’s saying, y’know, believe me—but I’m trying to say we’re trying not to go some place and seem judgmental. We’re trying, despite having done research and having obviously preconceived ideas, we try our best to be as open-hearted as possible, and try to create context. So that’s always going to be the challenge, making a program like this, and we are always thinking about it, reflecting on it, and doing our best to show the whole picture as much as possible in a 45-minute span. Hopefully that comes across.