Maclean's Mad Men panel: The past returns to haunt Don 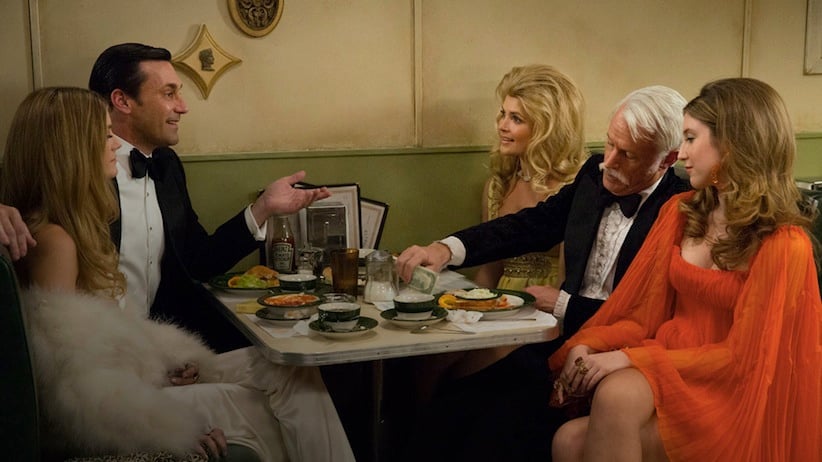 After seven seasons, it ends in just seven episodes: Mad Men, that sartorially splendid, slow-burning show from AMC, will wind down its clock. What will become of the lusty, booze-swilling ad man, Don Draper? Every week, Jaime Weinman, Adrian Lee, Colin Horgan and Sonya Bell quickly recap what most stood out from each of the final episodes and, in true Mad Men fan form, finds one detail to obsess over, analyzing its many prisms, as the Mad Moment. Spoilers ahead, for those who have not seen the latest episode.

ADRIAN LEE: Mad Men is not a show where “stuff” “happens.” It is a show that, as a result, can be criticized as boring; these are not the breathless cliffhangers of, say, AMC’s smash Breaking Bad. Instead, the pleasures of Mad Men comes in the casual, causal ways it makes reference to where we are and how far we’ve come. Each season, especially in the time leaps between each season, brings with them that “huh” experience of that moment where you realize just how much time has passed, through visual cues and tidbits of history crossing through their lives. (I myself had such an experience during the show’s actual commercials, when a bacon-wrapped, triple-decker pizza from Little Caesar’s made me consider the profound advances in fast-food technology. But I digress.)

So it explains why this isn’t a show that’s revelled in its major moments—this is, after all, a series where a partner has hanged himself, a baby was born and given up, a man loses an eye and, as they did in this debut episode, horrible porny moustaches appear on Roger Sterling and Ted Chaough’s lips without being referenced to at all. Time’s progress is not something its characters need to make oblique reference to; Mad Men‘s very premise is on demonstrating how life simply goes on—a kind of slower-burning Boyhood.

That’s why, too, it was so notable when Rachel Katz (née Menken), who had an affair with Don in the show’s very first season, returned out of the blue in a hallucination, only for Don to learn that she had died of leukemia. It’s rare to see this show make significant hay of the past, but the past—and its consequences—was so heavily imbued into Don’s narrative in the season’s opening episode. Don sees a woman at a diner that he swears he recognizes, can’t get her off his mind, returns to the diner, and has despairing alleyway sex with her. (It isn’t the first time that Don has recognized someone that he couldn’t place—there was a flight attendant last season who reminded him of someone, and looked most like the niece he flirted with in California, Stephanie, who ended up returning to his life in the first half of the seventh season, now pregnant.) Literal totems of his past failures appear in the form of the earring of Megan, the second wife he’s divorced, excavated during a fling with another girl. And when Don goes to pay his respects to Rachel, he meets her sister, who knows all about him—and that seems to gall Don most, the fact that others have memory of his actions beyond those disposable dalliances.

COLIN HORGAN: There’s lots to discuss in this episode, but perhaps most of striking of all was the women in it (and that seems intentional). Peggy and Joan in particular seem destined for … something. The scene around the table with the McCann bros was next-level insulting, but the elevator ride down afterward was just as interesting. Peggy and Joan have, in some ways, flipped roles. When it was once Joan showing Peggy the ropes of how to be a woman working in a man’s world, now Peggy is the more experienced—she’s had almost a decade of fighting for her voice.

SONYA BELL: Like a robin in spring, Sunday night’s sex, booze, money, and models trumpeted the long-awaited return of Mad Men. (Now featuring ’70s polka dots and a pale Pete!) What felt different about this episode, I found, was the clear sense that creator Matthew Weiner has set it on a closing arc. This is pleasing—I’m trying not to get my expectations for this half-season too high, but I would like to see some sort of resolution for these characters. I agree with Colin that the standout scenes were those between Peggy and Joan. That elevator ride! No contest, the line of the night was Joan’s “I want to burn this place down.” I think this is the best evidence yet of the potential for a spin-off, with Peggy and Joan leaving to start up a Mad Women firm. Oh, with Sally Draper as a junior associate. Because if there was one thing this premiere was missing, it was Sally Draper. 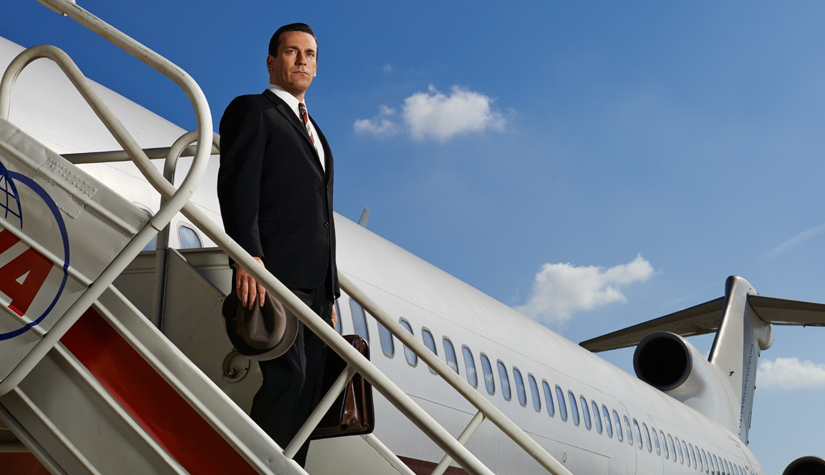 Our Mad Men experts find one particularly fascinating detail to analyze deeply, reading into it for its clues and its contexts. This week’s Mad Moment: Rachel Katz, the department store head who has a torrid, meaningful affair in season one, appears to Don in a dream and whispers to him: “I’m supposed to tell you you missed your flight.”

COLIN: When we miss our flight, the first question we get is always “why?” But that’s putting it too simply. It misses the mark. More accurately, when we miss a flight, what people really want to know is: what were we doing instead?

This seems to be what weighs on Don’s mind from the moment he hears of Rachel Katz’s premature death from leukemia, only a day or so after she’d appeared to him in a dream to utter this phrase. What has he been doing in the six or seven years since he met Rachel? And what could have happened instead? Let’s not forget that Don initially wanted to run away—out West—with Rachel, but she turned him down. A missed flight, indeed.

Ted tells Don midway through the episode: “There are three women in every man’s life.” To Don, and despite his track record, surely this sounds about right (Betty, Megan, Rachel). He later tries, quickly, to describe his recent history to Rachel’s sister. He had married again, he said, but didn’t leave his first wife for the new one, necessarily. There’s a lot of subtext there—all of which we know—but basically what he’s saying is: divorce, marriage, divorce. This, and all that came with it, was the alternative to Rachel.

But her message isn’t just for Don. Peggy, too, misses a flight, albeit a hypothetical one to Paris, with her date. And what’s she doing instead? Waking up in her office, at the job she’s now mastered, reviewing the same old ad copy. As Peggy Lee asks us at the beginning and close of the episode: Is that all there is?

Perhaps we should ask Ken Cosgrove.

Related: On Mad Men, the clothes will tell the story

ADRIAN: There’s so much delicious to chew over here. Let’s start with the fact that this makes for two consecutive episodes in which Don has had a vision of someone who’s died, only for them to reappear and tell him something true of himself. The first half of this season ended with Bert Cooper’s death, who then sang and tap-danced through Don’s mind to The Best Things In Life Are Free. But on closer inspection, that song could be more than mere jaunty fun: read those lyrics with the word free not meaning “without cost” but rather as “liberated,” and you’ll see why Don was so thrown by the dream. The best things in life—the moon, the stars, the flowers in spring, the robins that spring—are all free to do as they please; they’re truly happy. Rachel’s missive about a missed flight, then, can be read as a similar omen: He missed his chance to get away, the getaway that he had wanted to do with Rachel herself back in season one.

So this moment, to me, is a microcosm of the episode’s ultimate message: Don seems on the precipice of another reinvention, because this skin—the Don Draper identity that Dick Whitman lucked into during the Korean War—is now fitting him poorly. When he’s telling the models wearing the $15,000 chinchilla fur—the one that Rachel appears in, in the hallucination—to look in the mirror and asking them, “Do you like what you see?” he may as well be talking to himself. And, in fact, it seems more than mere coincidence that, in the episode’s closing scene, Don looks like he’s staring existentially into his own reflection in the diner’s glass cupboards across from him as Peggy Lee growls these particularly intriguing sentences from Is That All There Is, the song we’ll be talking about for the next seven weeks:

“I fell in love, with the most wonderful boy in the world. We would take long walks by the river or just sit for hours gazing into each other’s eyes. We were so very much in love. Then one day, he went away and I thought I’d die. But I didn’t. And when I didn’t I said to myself, ‘Is that all there is to love?'”

SONYA:  I really do relish the level of detail in this show, though I worry (fear?) that much of the superfan theorizing around Mad Men may end up being about as useful as it was with True Detective. That is, we read too much into it, saw so many dots to connect, and then it turned out the show wasn’t as smart as we first thought.

But, that’s actually why I liked Don’s dream about the missed plane so much. I wonder if it was Matthew Weiner going full meta. We saw a hint of this in the scene between Pete and Ken, when Ken reveals he’s going to write a novel next. Pete is supportive, but dismisses Ken’s idea to write about his experiences in advertising, because “This world is boring.” Wink wink. Similarly, I smiled at the missed plane moment because it reminds me of the widely circulated (probably crazy) theory that Don will turn out to be D.B. Cooper, the legendary skyjacker who jumped out of a plane with $200,000 in 1971 and was never seen again. Adrian and Colin are right to point out the significance of Don wanting to get away, and the chances he missed to do that, but—I like to see an additional layer to this, which is Weiner telling fans that we think Don is supposed to end this season on a literal plane…and he won’t. There’s something else in store.