Mozart in the Jungle brings the sex, drugs and oboes

But is the Amazon series any good for classical music? 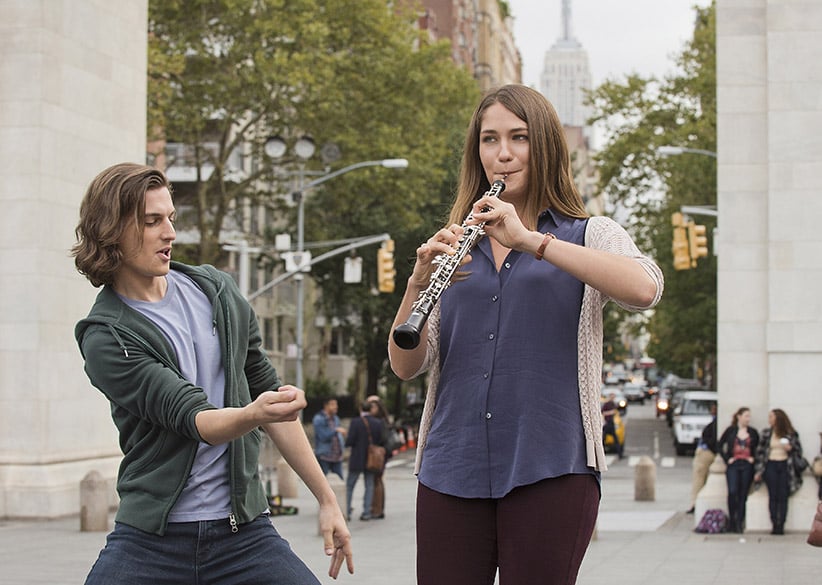 Peter Vack and Lola Kirke in Mozart in the Jungle.  (Amazon/Everett Collection)

Is Mozart in the Jungle good for classical music? The Amazon series, streaming on Shomi in Canada, pulled off a surprise win for Best Comedy Series at the Golden Globes. But the show isn’t just a comedy about an oboist (Lola Kirke) playing in an orchestra for a sexy young conductor (Gael García Bernal). The show acts as an evangelist for the world of serious music and the subculture of people who play it. “I was trying to celebrate musicians and laud them,” says Blair Tindall, the real-life oboist who wrote the book the series is based on. The Washington Post’s Anne Midgette accused the first season of “almost gleefully flaunting its ignorance of the field.” But whether it’s savvy or ignorant, it’s helping to raise awareness that classical music still exists.

Tindall, whose book was based on her experiences as a musician in New York City, raised some controversy by exposing the fact that the classical music world has plenty of sex and drugs, just like any other music world. The creators of the series updated the setting to the present, but kept the basic idea of showing that classical musicians can be as naughty as anyone. Bernal, who won a Golden Globe for his role as a character based on real-life conductor Gustavo Dudamel (who showed his gratitude by making a cameo), told Rolling Stone he likes showing that musicians “all breathe and eat and fart like normal people.”

That makes Mozart in the Jungle just the latest in a long line of entertainments that try to demystify symphonic music and the people who make it. Adam Scovell, a Ph.D. candidate at University of Liverpool, has written about the role of classical music in the films of Ken Russell; he says Russell’s film Song of Summer, about the English composer Frederick Delius, was a standout because it “earnestly shows how horrendous some composers could be in real life.” Perhaps the most popular film about classical music, the Academy Award-winning Amadeus, emphasized Mozart’s love of toilet humour, and Russell shocked music critics with Lisztomania, where the composer and pianist was portrayed as a literal rock star. On Mozart in the Jungle, there are fantasy sequences where great composers commune with Bernal: “You think you have hearing problems?” Beethoven says. “I can’t hear scheisse!”

The aim of these works is to break down the idea, hundreds of years old, that symphonic music is for the wealthy elite. One of the themes of Mozart in the Jungle is Bernal’s attempt to connect with an audience beyond the largely old, rich clientele of the fictional New York Symphony, and the show itself is trying to reach out to that audience. Disney’s Fantasia tried to popularize classical music by having conductor Leopold Stokowski shake hands with Mickey Mouse, and Mozart in the Jungle wants to reassure us that this kind of music isn’t forbidding: “They don’t have to pay $100 for a seat,” Tindall explains. “They’re watching the music unfold in the background, they’re loving it, and they don’t have to figure out if they’re supposed to clap here or not.”
This approach to classical music runs the danger of trivializing it. There’s rarely time for complete performances, so Scovell says producers have to “segment larger classical pieces, undermining their overall context, as well as totally warping the canon to a handful of four- to five- minute ‘hits.’ ” There’s no guarantee that people who enjoy the snippets will be interested in the full pieces.

Still, the advantages of this approach may outweigh any negatives. Midgette recanted her view of the series, and allowed that the second season might help classical music “gain wider recognition in the broader culture.” And Tindall says that while there were complaints from musicians “that actors weren’t holding their instruments right,” this has faded away. “People are starting to realize that it’s better to celebrate these things than complain about them.” If TV and movies won’t make every viewer a classical fan, some of them will take the bait: “I have no problem whatsoever with admitting that I came to the whole of Bartók’s music because of Stanley Kubrick,” Scovell says. “Even if I can hear the nervous, awkward rustle of musicologists penning various diatribes against such a notion.”