How the 'Normal People' TV series redeemed the novel for me

The relationship between Marianne and Connell in Sally Rooney's book was indeed very “sticky,” but I thought the writing didn’t do it justice, writes Dafna Izenberg 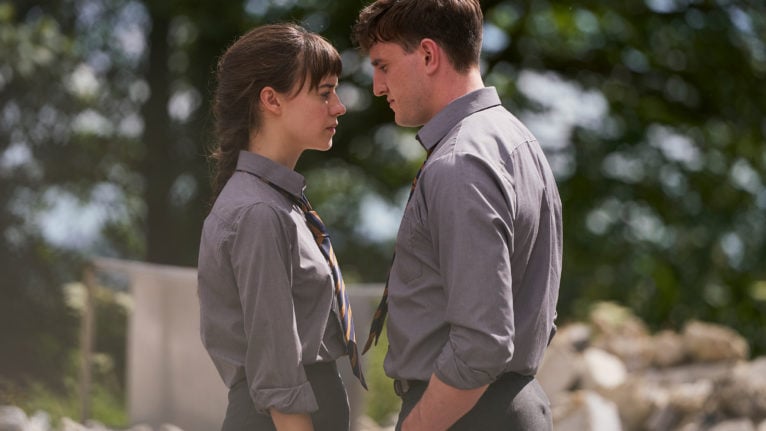 Edgar-Jones (left) and Mescal, as Marianne and Connell, had undeniable onscreen chemistry (Courtesy of CBC)

It’s better than the book. That’s what I thought when I started watching the Hulu series Normal People (now available on CBC Gem), based on the 2018 novel by Sally Rooney about a contemporary love affair between two Irish students. It came down to the exquisite rendering of Marianne (played by Daisy Edgar-Jones) and Connell (played by Paul Mescal), I decided. The tiniest twitch of one’s eyebrow or flex of the other’s nostril seemed to capture what went unsaid between them more urgently than Rooney’s writing managed to. Where I’d struggled to understand book-Connell’s early angst about the relationship, I practically sympathized with TV-Connell when he ignored Marianne at school. Where I could not fathom book-Marianne’s sunny reception of Connell at their reunion in college, TV-Marianne moved her face in such a way that I understood it perfectly. The story makes more sense on the screen, I thought. The words don’t get in the way.

Because that was my chief complaint about the book: the words. By the time I read Normal People, Rooney was a literary cause célèbre, profiled by The New Yorker, hailed as “superb” by Irish writer Anne Enright, longlisted for the Booker. Two pages in, I was baffled. The prose was so simple, the description practically mechanical. Glancing back through the novel after watching the first episodes of the series, it occurred to me that the writing was actually better suited to a screenplay. The book’s first passage: “Marianne answers the door when Connell rings the bell. She’s still wearing her school uniform, but she’s taken off the sweater, so it’s just the blouse and skirt, and she has no shoes on, only tights.” It was, I thought, an “easy” read. This was disappointing.

READ: 19 books you should read this summer

To me, literature is defined by its ability to challenge you, to actually make you smarter. It’s meant to interrogate—and deeply—important questions about love and politics and art, and to do this with really, really good words. Literature is meant to assemble language in such a way as to lodge a new voice inside your head, alter the rhythm of your thoughts, add to your vocabulary—expand your very cognition.

Normal People didn’t meet this bar, not for me. When friends and family raved about it, I shrugged. The relationship between Marianne and Connell was indeed very “sticky,” but the writing didn’t do it justice. The book just wasn’t as good as I wanted it to be.

Then the series came out, and a friend said, “You should watch it.” So did half the internet, where the tenderness of the show’s love scenes was lauded (not to mention Connell’s now-famous silver chain). BBC Three reported its best week ever—16.2 million streaming requests—after airing the series on April 26.

I was curious (aren’t we always?) to see how close the casting had come to how I’d imagined the characters. Answer: so close that I felt like Marianne and Connell were back in my life. And now that they’d been freed from the page, I felt I knew them better than ever.

But it did not sit well with me, this idea that a TV series could clean up after a novel. I went back to the book.

And yes, my second read was enriched from having seen the characters on TV. But I also saw more clearly where the novel succeeds, how artfully it engages with questions about love and politics and art. Just before depicting an ill-fated conversation between Marianne and Connell, for example, Rooney describes how money circulates from Marianne’s mother (a lawyer) to Connell’s mother (her maid), to Connell, and then back to Marianne—it’s as a lively and legible a mediation on class as I’ve ever read, and something that could never have been accomplished on television.

I also saw that Rooney’s language does shine through on occasion, especially through Connell, who is himself an aspiring writer. “Cherries hang on the dark-green trees like earrings,” is a sentence he composes for an email to Marianne. A line like that doesn’t work on TV. Neither does the series capture Connell’s ambivalence about writing, his worry that literature is “culture as class performance” and “has no potential as a form of resistance to anything.”

Rooney, who subscribes to Marxism, has similar concerns. At a standing-room-only event in Toronto last year, she said she sometimes wonders about the point of art at a time of crisis. “I guess one answer might be that it’s easy for a lot of us to see what we’re struggling against,” she said, “but it’s not always so easy to remember what we’re struggling for.” For her, “novels are one of the things that make life worth going on with.”

This article appears in print in the August 2020 issue of Maclean’s magazine with the headline, “Bringing Normal People to life.” Subscribe to the monthly print magazine here.