On the reboot of Poldark: 'Sometimes you have to go for it'

A Masterpiece classic is back with more fighting, riding, drama and abs 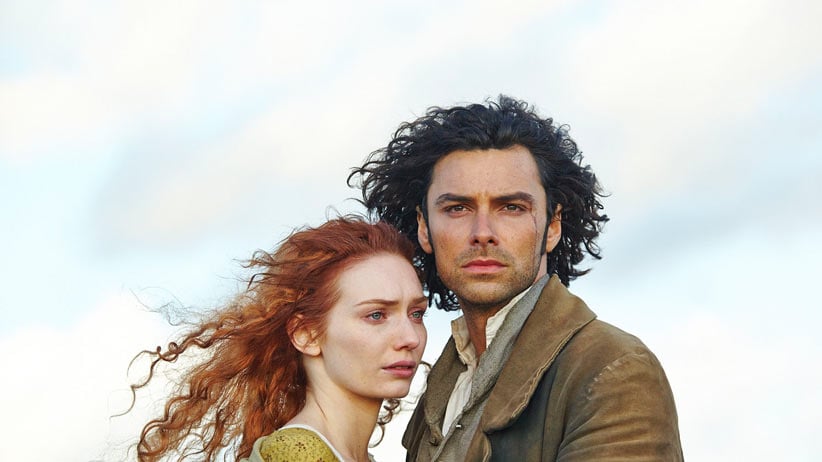 Aidan Turner is a bit irked by the criticism stirred up by his title role in Poldark. It’s not about his acting or his pectorals, which have both garnered considerable praise. It’s his technique for cutting wild grass. “I never thought, as a 31-year-old man, I’d be defending my scything skills,” says the Irish actor with a laugh, “but so be it, I will.”

The revamp of the swashbuckling series that captivated audiences on both sides of the Atlantic in the 1970s was already attracting big audiences when it aired in Britain this spring. (The reboot averaged 8.1 million viewers a week, helping the BBC record its highest ratings in a decade.) Then came the scene where a shirtless Ross Poldark swung a scythe through a flower meadow in Cornwall. The country swooned. Except for scything experts, unhappy with the actor’s flawed technique.

“Do you know what scything actually looks like when it’s done right?” Turner asks. “You’re standing with your feet together, doing tiny, tiny, little half-circle movements. It’s the most boring thing you can ever imagine. I said, ‘Man, I can’t do that, it looks ridiculous.’ ” So he ignored the on-set pro and swung his blade with abandon. “Sometimes you have to go for it.”

That gambler ethos is pure Poldark. The seven-part series, which starts June 21 on PBS’s Masterpiece, isn’t a polite British historical drama with a powerful leading man and a huge mansion. Ross Poldark is a scarred, brooding officer returning from the American revolutionary war. He goes home to dire times in rural Cornwall: his love is newly engaged to his cousin, his father is dead, and aside from an ancient name, all Poldark has inherited is barren land and a closed copper mine. “He doesn’t feel sorry for himself a lot. He pulls himself up by the bootstraps and gets on with it,” Turner explains.

The original Poldark was a blockbuster that firmly put Masterpiece on the TV map when it aired in 1977—three decades later it was still among the most popular series ever shown on the PBS Sunday night stalwart. It is no surprise Masterpiece executive producer Rebecca Eaton signed on to the reboot even before she saw a script. And in Aidan Turner (The Hobbit), the producers have a charismatic star. “He’s a very, very good actor,” says Eaton. “He’s gorgeous, but he nails the romantic hero because he’s serious, strong, yet incredibly sexy and passionate.”

The new Poldark amps up the drama and sex appeal—there’s more than enough fighting, riding and skinny dipping to satisfy the merely curious as well as fans of the original, much tamer show. British female viewers lustily compared Turner’s ripped torso to Mr. Darcy’s famous wet shirt. A second season was greenlit before an episode aired on this side of the Atlantic.

The show could well resonate with North American audiences, too. Ross Poldark was born a gentleman, but he is an egalitarian. In the inky darkness of the mine that he reopens, he works alongside those below him in the social pecking order. “He does the right thing, even when it’s not the easy thing,” explains Eaton. That moral sense includes hiring an abused girl, Demelza, as a housemaid, and fighting off her father. Eventually they are romantically involved, and, to the shock of Cornwall society, marry. 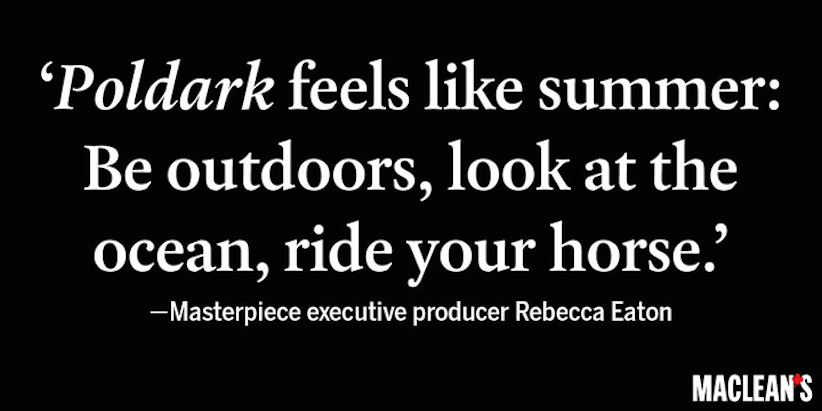 Poldark is a grand epic, based on Winston Graham’s popular books. It may not be filled with hard-driving angst, yet it is more than windswept romanticism. As with Graham’s detailed books, the series shows a stratified society not unfamiliar to contemporary viewers. At the top are the Warleggans, nouveau riche financiers who trample over everyone in pursuit of riches. The damage wrought is evocative of the scams and abuses in the banking world today.

Yet at its heart Poldark is a web of adventure, intrigue, humour and romance, set on the spectacularly untamed coast of Cornwall. Just as the dark political drama of Wolf Hall suited winter television, the lighter, sweeping tones of Poldark are perfect for this season’s evenings. “You want to relax, and let it wash over you,” Eaton says. “Poldark feels like summer: be outdoors, look at the ocean, ride your horse.” And perhaps use something less controversial to cut the grass.