The curious case of The Bachelor’s Ashley S.

Ashley S. is absurd—but then again, so is the entire Bachelor enterprise. Why the show does not want us asking too many questions. 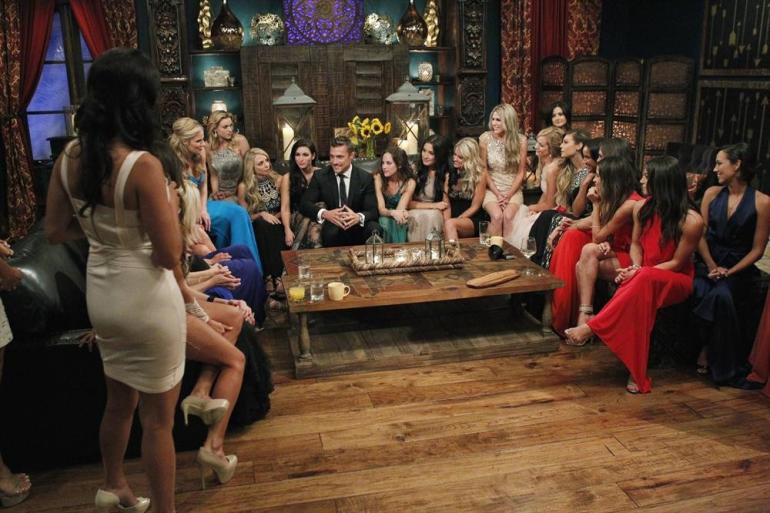 Among the subplots on ABC’s The Bachelor this season, none has been so vexing as the curious tale of Ashley S.

From the first night onward, Ashley S. behaved strangely. Most notably—and something about which the program reminded viewers again on Monday night during the Women Tell All evening—was her discovery, on the first evening, of a pomegranate hanging from a tree. Facing the camera for a confessional, she became distracted by the fruit and, apparently thinking it was an onion, left the frame to explore further.

In subsequent episodes, she: speculated that an angel would receive the rose; disappeared from sight, only to return and claim that she’d “heard the truth . . . that’s all I mean, that’s how I feel, it’s like, boom”; declared that she “wrote on my bucket list this new idea of sunflower fields. Like, I just want to run through the sunflower seeds”; and told Chris, “You don’t want to lose the whole world. But actually, you don’t want to gain the whole world. You don’t want to lose your soul.” Ashley S. also concluded that, behind the scenes, the producers of The Bachelor were actively betting on the outcome of the program.

Weirdest of all was her behaviour when the group went to an outdoor paintball range. “It’s like Mesa Verde,” she seethed, pointing her gun at the camera, eyes wide. Kaitlyn later told the cameras: “I am here to tell everybody that Ashley is full-blown the crazy girl on The Bachelor.”

One would imagine that if it were true, however, everyone ought to have been a lot more concerned. Some were, of course, though apparently nobody who worked for the program. Elle.com, for instance, asked whether it was “wrong to keep crazy Ashley on The Bachelor.” (This kind of reaction played to exactly the stereotype the show was attempting to create while, ostensibly, decrying the same for its insensitivity.)

Still, the question (though flawed) was nearly right: If Ashley S. was indeed mentally ill, what on Earth was she doing on this program? Moreover, how were we to interpret the way she was treated? Rather than explore her issues, The Bachelor played them up for comic effect. Was this the way to treat mental illness? We all tut-tutted.

So when Monday night rolled around, and Ashley S. was given a platform to discuss her time on the program, there was likely some hope among many Bachelor viewers that we’d find out the truth. Was she an actor? Was she going through some kind of emotional stress during filming? Did she have a previously undiagnosed disorder? Was she on drugs?

Er, none of the above, apparently. Or, more accurately: We still don’t know.

When she walked up to the couches to have a chat with host Chris Harrison, Ashley brought with her an onion as a gift for him—har har. But rather than provide any insight into what was going on during her time on the show, Ashley S. just kept acting weird, much to the delight of the other contestants and the live audience.

Harrison asked her why she thought there was a betting pool going on behind the scenes, which, he clarified, had been the show’s accountants at work. “I was so bored, honestly, and I was just like, ‘I’m gonna go explore,’ ” she replied. “Finding a secret betting pool, even an imaginary one, is way more fun than finding some accounting, no matter how old you are.”

Harrison asked her who the real Ashley S. is. “I like to ride bikes, and I mean, this is me,” she told him. “I think, with the cameras around, it’s really hard for me to not be silly. So while all of them were getting upset and crying, I was outside picking pomegranates.”

When, finally, Harrison invited her to appear on The Bachelor in Paradise—a program set up to invite even more fantastical behaviour than the regular show—Ashley S. didn’t directly respond. Instead, she simply noted that it was “weird . . . that we’re all on TV.”

It’s difficult, as a viewer, to know what to make of all this. Is there a moral quandary here? Should we feel guilty about any part of this? Are we being duped? Or is something else going on entirely?

Fans of shows like this tend to take it on good faith that producers, while intent on running entertaining programming and pushing various psychological limits to that end, aren’t out to specifically exploit very serious, perhaps deep-seated, issues. Things like death are often handled tastefully (such as when a former Bachelorette contestant died between filming and airing). In lesser instances, we can usually expect some kind of “awareness” message, where the highlighted problem becomes a way to market the show itself, under the guise of helping people everywhere.

And while there are a number of issues with that approach, it can usually at least help viewers absolve themselves of any guilt they might feel. We like to be voyeurs, but not if it’s too obvious that we’re voyeurs and, particularly, if what we’re seeing makes us feel uncomfortable. Show runners and producers know this, especially on The Bachelor, a show dedicated entirely to reinforcing very standard, conservative ideas about security. To have us feel uncomfortable for too long goes entirely against the show’s ethos.

This is about where Ashley S. starts to become interesting, rather than simply strange, because it’s through this lens of comfort and fairy tale that The Bachelor was forced to frame her.

Usually in these situations, producers play to type, which is why everyone understood Kaitlyn’s classification of Ashley as “the crazy girl on The Bachelor.” They construct this trope all the time, even when there’s really nothing going on. It makes for good drama, but what it really does, in the end, is reinforce the main message that there is order in the universe. Even the somewhat strange can be categorized: they are “crazy.”

Which is what The Bachelor tried again with Ashley S.—except it didn’t work. We were uncomfortable, no matter how many times the show brushed her off as just another kooky nutbar not there for the right reasons, but worth having around to laugh at.

It didn’t work this time, because Ashley S. wasn’t merely weird; she was absurd. And absurdity is something entirely different, and very rarely something we watch at 8 p.m. on a main network for a couple of hours on Monday night. It lives elsewhere. It doesn’t belong in The Bachelor universe.

The great thing about it, though, is that however it came (again, we don’t know the answer), when it arrived via Ashley S., it broke the structure of the program entirely. The Bachelor is not equipped for this kind of thing, because the result of having a rogue, absurdist, element like Ashley S. around isn’t us wondering if she’s crazy; we end up wondering if we’re crazy.

The only logical question to come from watching Ashley S. was: What is this? This question is poison to The Bachelor, and it’s why the show tried so hard to make Ashley a joke; they even took time out of a special one-on-one with Chris halfway through the season to watch a highlight reel of her bizarro outtakes. The question of what, exactly, this is that we’re watching undermines The Bachelor entirely. As soon as we start asking it about one aspect of the show, we could end up asking it about every single other one, too—starting with the very premise of the thing.

So, yes, Ashley S. might be strange, but in what context? Everything about this show is strange. Ashley S. is right: It is weird that this is on TV. It’s nice that someone finally pointed it out.

FILED UNDER: The Bachelor