The 'Downton Abbey' jeweller explains how to wear a tiara 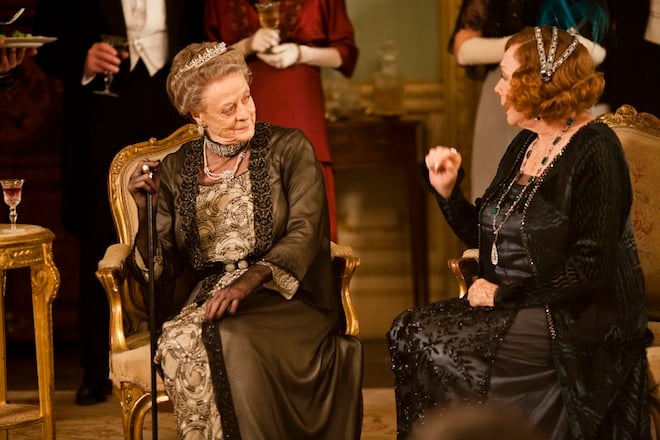 Maggie Smith as the dowager countess of Grantham (left)

Now that the Grantham girls are grown up, the war is over, and family is finally emerging from a season of mourning, the women of Downton Abbey are dripping with diamonds, pearls and fine jewellery. And much of what is seen on the hit of hits for PBS’s Masterpiece, comes from Andrew Prince, who has created fine crystal jewellery for his own firm for the last decade. He got the gig through Geoffrey Munn, the managing director of Wartski, an exclusive London jeweller. As Prince tells it, “The program contacted Munn and said, ‘Can you lend us some tiaras?’  He said, ‘No. They’re real and we can’t let them go for nine weeks. But have you met Andrew?’ And it went from there.”

Prince was brutally frank when he met with the show’s costume designer, Caroline McCall. “The clothes are sublime, but the jewellery doesn’t match,” he recalls saying. “The jewellery, as worn, isn’t correct for the characters. Lady Cora is an American heiress and would have big punchy diamonds. Lady Mary would have fine delicate pearl stuff.” Instead the designers had matched the clothes, not the era and the personalities. So Prince just asked, “You tell me who they are, how old they are and what’s the situation—I’ll design it to be appropriate for the era.”

His first piece was Maggie Smith’s tiara. Her character, the dowager countess of Grantham is “stuffy, snobby, and looks down at vulgarity unless it’s 200 years old and English.” So he designed jewellery that appears Edwardian or late Victorian in its appearance, “grand but very real,” he recalls.

Though he’s lent them well over 200 pieces from his firm’s stock—everything from simple earrings to long strands of pearls—all the big stuff is designed specifically for them. In total, he’s created about 40 pieces. And he understands when viewers used to walking around in jeans and T-shirts gasp at the sheer amount of diamonds worn for an evening dinner. “They wore a lot of jewellery then. You didn’t go out without a brooch. It wasn’t a case of opening a box and wondering, ‘Oh what will I wear.’ You had specific suites [of jewellery] for specific times.” For example, he notes, “You didn’t wear a tiara in a hotel; that was very vulgar. You could wear them to opera, palaces, or private occasions.”

And making this season so different from the ones before it, is the rapidly changing style of jewellery. Out were ornate creations, in were sleek elongated forms. “The most revolutionary person in jewellery was a couturier, Paul Poiret,” Prince explains, “when he made it socially acceptable for women not to wear the corset. Suddenly, 400 years of jewellery was totally obsolete. Some jewelers went bust, because they had stock they couldn’t shift. Stomachers, wide necklaces, aglets, all useless.”

Prince has been creating jewellery since he was a three-year-old, pulling beads off his mother’s wedding dress. Then, when he was around 14, his life changed. He and his mother had arrived late for an exhibition at Wartski, but Geoffrey Munn and other staff let them in. Suddenly, they were opening boxes, and showing off the Fabergé treasures that Wartski is famous for selling. “It blew my mind,” Prince recalls. And his profession was set.

By about the time of the third season he noticed a change in jewellery. Before then, British women were downplaying their finery for utterly simple styles. “To me, minimal is lack of imagination,” Prince says. “Less is less.” Then, at the end of the third season of Downton Abbey, people started to want to wear jewellery again. Professional women would go into his shop talking of plain designs, then become eight-year-olds in love with sparkle. And the effect has wafted across the Atlantic to North America. Currently Prince is selling his crystal wares at Bergdorfs, and a lot of it were original pieces from Downton. “I think they sold 30 pieces within a month.” Other Downton pieces are sold on his website. Lady Mary’s feather slide costs around $700 while a spectacular pair of briolette drop earrings is $625. 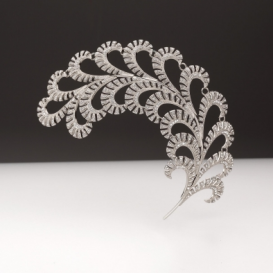 And as for everyone wanting to wear a tiara, if only for a day, then Prince has three simple rules.

1. “Make sure it’s not uncomfortable. If it is a round band, very circular, it is going to pinch like crazy, it is going to dig in like crazy at the front and the sides. It should be oval. No one’s head is round.”

2. “See the way the tiara is angled. If you put it flat on a table, the tiara should be leaning forward, not at a right angle. When you put the tiara on, because you’re angling it to go around your face, the front has to lean forward to sit upright”

3. As for seating a tiara for maximum attractiveness, Prince has a law of proportions: “Put your thumb on your chin, and the index finger on the bridge of your nose, between your eyebrows. Take that measurement, and put your thumb where your index finger was. Where your finger now touches your head should be where the base of the tiara is, because it makes your eyes the centre of your face.”

And please, do not wear it flat to the head like an Alice band—that drives him crazy, since it gives the ceiling a lovely view of the piece, while denying that pleasure to everyone else at the event.

For those lucky enough to be in London in February, he’s giving a lecture at the Victoria and Albert Museum. Called “From Downton to Gatsby” it will let 250 people try on, touch and feel the jewellery. And fulfill some fantasies at the same time.